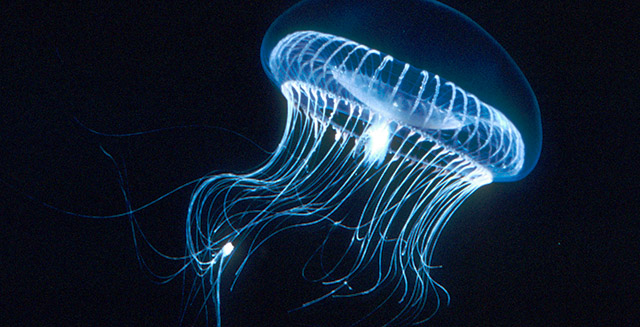 This jelly in the genus Aequorea is one of the many types of glowing organisms found in Monterey Bay. MBARI researchers recently showed that they can categorize some groups of algae and animals in the bay by the brightness and duration of their glow. Image: Kevin Raskoff © 1999 MBARI

Many nighttime beach-goers have seen the ocean waves glowing with an eerie blue-green light. This awe-inspiring phenomon is caused by billions of microscopic algae that release light when they are disturbed. But these algae aren’t the only marine organisms that bioluminesce, or produce their their own light. We now know that about three quarters of the deep-sea animals in Monterey Bay are bioluminescent. Scientists at MBARI recently found a way to put this bioluminescence to use, showing that several groups of glowing marine organisms can be identified by the light they produce.

This discovery was published in the journal Progress in Oceanography, in a new paper written by MBARI Research Specialist Monique Messié, Senior Scientist Steve Haddock, Igor Shulman from the US Naval Research Lab, and former MBARI Postdoctoral Fellow Séverine Martini.

The new research complements Martini and Haddock’s 2017 paper, which showed how common bioluminescent animals are in Monterey Bay. As Haddock noted, “Because bioluminescence is so common, we were hoping it could be used to understand how many and what kinds of organisms are in the ocean.”

One of MBARI’s institutional goals is to develop automated instruments for monitoring the ocean. Over the past two decades, MBARI engineers have developed a number of automated sensors that can measure the chemical properties of seawater (for example, ocean acidity and the concentration of carbon dioxide, oxygen, and nitrate in seawater). However, designing automated instruments that can monitor life in the ocean has proven to be more difficult.

Rising to this challenge, researchers at MBARI and elsewhere have been working on automated sensors that can detect and identify marine algae and animals using DNA analysis and sound (sonar). Messié and her coauthors showed that optical (light-based) sensors can also be useful in this quest. 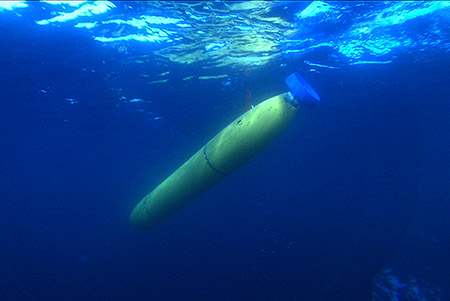 This underwater robot, an autonomous underwater vehicle (AUV) carries a variety of instruments, including some that can measure the light produced by small algae and animals in seawater. Image: © 2000 MBARI

More specifically, the researchers found a new way to combine data from two existing oceanographic instruments—fluorometers and bathyphotometers. Fluorometers are typically used to estimate the amount of microscopic algae in seawater. Chlorophyll fluorometers shine blue light into seawater. Some of this light is absorbed by chlorophyll in algae and converted into red light, which is re-emitted in a process called fluorescence. The amount of red light emitted indicates the amount of chlorophyll (and algae) in the water sample.

Bathyphotometers, on the other hand, measure the amount of light emitted directly by animals and algae in the water. These instruments suck seawater into a dark chamber where turbulence disturbs the animals and algae, causing them to glow (bioluminesce). The amount of light given off inside the chamber provides an indication of how many glowing organisms are in the water.

Oceanographers have used fluorometers and bathyphotometers for decades to estimate the overall amounts of algae or glowing marine life in the ocean. But this is the first study to combine data from these two instruments to figure out what types of algae or glowing organisms are present.

Messié and her collaborators developed and tested their new identification strategy using data from large-scale experiments conducted in Monterey Bay during 2000, 2002, and 2003. As part of these experiments, oceanographers collected data from fluorometers and bathyphotometers while marine biologists looked at water samples and visually identified the various kinds of algae and small animals present.

This data set allowed the researchers to merge the information from the two sensors. It also allowed them to check their results using data from trained human observers. 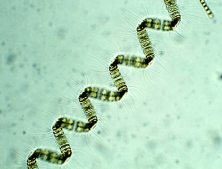 Diatoms like this one in the genus Chaetoceros do not produce their own light, but contain chlorophyll that glows when exposed to the blue light. Image courtesy of NOAA.

Messié and her coauthors were excited to find that they could identify some groups of organisms quite well, based how much fluorescent and bioluminescent light they produced, as well as the brightness and duration of flashes of the bioluminescent light.

For example, when the instruments showed high chlorophyll concentrations but little or no bioluminescence, the dominant organisms in Monterey Bay were likely to be diatoms—a type of non-bioluminescent microscopic algae that is common in the bay during spring and summer. 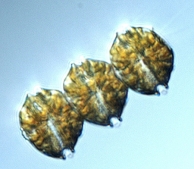 This microscopic alga, a type of dinoflagellate called Alexandrium catenella, contains chlorophyll and sometimes produces its own light. Image courtesy of Raphael Kudela/CeNCOOS

On the other hand, when chlorophyll concentrations were high and the bathyphotometer detected many small flashes, the dominant organisms were likely a different group of microscopic algae called dinoflagellates. Although individual dinoflagellates do not emit a lot of light, when millions of them are present, they appear to glow brightly and continuously, creating glowing waves and boat wakes. They can also cause red tides and shellfish poisoning in humans.

When chlorophyll concentrations were low, but there were short, low-intensity flashes of bioluminescence, the most common animals were likely to be small tadpole-like creatures called larvaceans. If the short flashes were brighter, then small, shrimp-like copepods were the dominant animal. Occasionally the instruments showed a few extremely bright flashes, which indicated the presence of small jellies.

After developing their new method for identifying animals based on light sensors, the researchers used this technique to estimate where and when different types of organisms were abundant in Monterey Bay during the 2003 field experiment. They also compared their results with the painstaking animal counts made by biologists.

These preliminary results make sense scientifically, and indicate that the new analysis method could provide a valuable new approach for monitoring life in Monterey Bay. The researchers point out that MBARI has at least 15 years of additional data from fluorometers and bathyphotometers that could be analyzed using this method.

Messié and her coauthors note that this method could be used in other ocean areas, but would require localized “calibration” studies to confirm the relationships between what the instruments measure and what groups of organisms are present in any given area. The method could also be combined with other automated instruments for studying life in the oceans, such as MBARI’s Environmental Sample Processor.

Although still in the pilot stage, this new method has the potential to advance MBARI ’s mission to develop new instruments and techniques for ocean monitoring. To be truly useful to marine resource managers, such monitoring must include not just the physical and chemical state of the ocean, but also the algae and animals that make the ocean their home.

December 10, 2020 – At least nine major groups of deep-sea animals, including jellies, corals, brittle stars, squids, and fish, use the same light-emitting chemical, coelenterazine, to power their displays.
July 13, 2020 – A new research paper shows that some of the most common and iconic deep-sea corals can create their own light.
March 23, 2020 – Humboldt squid communicate with each other using changing patterns of light and dark pigment in their skin.
October 17, 2019 – MBARI researchers recently found that animals living on the deep seafloor are much less likely to produce light than those swimming or drifting in the “midwater.”