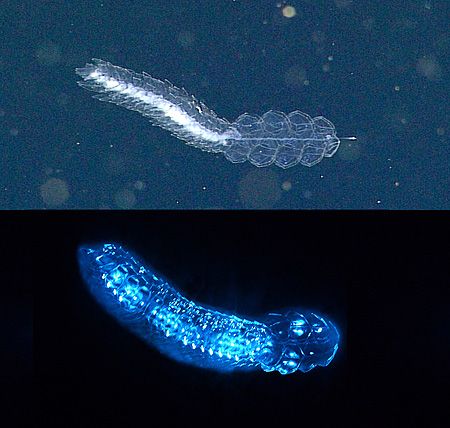 This image shows the siphonophore Frillagalma vityazi lit up by lights on a remotely operated vehicle (top) and emitting bioluminescence in the lab (bottom). A recent paper shows that 99.7 percent of siphonophores in Monterey Bay create their own light. Top image: © 2015 MBARI. Bottom image: Steve Haddock © 2017 MBARI.

Ever since explorer William Beebe descended into the depths in a metal sphere in the 1930s, marine biologists have been astounded by the number and diversity of glowing animals in the ocean. Yet few studies have actually documented the numbers of glowing animals at different depths. In a new study in Scientific Reports, MBARI researchers Séverine Martini and Steve Haddock show that three quarters of the animals in Monterey Bay waters between the surface and 4,000 meters deep can produce their own light.

You would think it would be easy to count the number of glowing (bioluminescent) animals in the ocean, just by looking at videos or photographs taken at different depths. Unfortunately, very few cameras are sensitive enough to show the pale glow of many marine animals. Below 300 meters (1,000 feet) the ocean is essentially pitch black, so animals don’t need to glow very brightly. Also most animals don’t glow continuously because making light takes extra energy and can attract predators.

Because of the difficulty in counting glowing animals at depth, most previous estimates of the proportion of glowing animals were based on qualitative observations made by researchers peering out the windows of submersibles. Martini and Haddock’s study is the first ever quantitative analysis of the numbers and types of individual glowing animals at different depths.

The researchers compiled data on every animal larger than one centimeter that appeared in video from 240 dives by MBARI’s remotely operated vehicles (ROVs) in and around Monterey Canyon. They counted over 350,000 individual animals, each of which had been identified by MBARI video technicians using a vast database known as the Video Annotation and Reference System (VARS). The VARS database contains over five million observations of deep-sea animals, and has been used as a source of data for more than 360 research papers.

This graph shows the proportion of midwater animals that glow at different depths in Monterey Bay. Although there are more “undefined” animals in deeper water, the proportion of glowing to non-glowing animals is relatively similar at all depths. Image: Severine Martini © 2017 MBARI.

Martini, the lead author of the recent study, compared the list of animals seen during the 240 ROV dives with a list of animals and animal groups that were known to be bioluminescent. This list was based on a review of previous scientific papers, as well as firsthand observations by Haddock and others. As an indication of the lack of research in this area, the most complete source of bioluminescence information for marine animals was a paper published in 1987, 30 years ago.

Because scientists know so little about deep-sea animals, 20 to 40 percent of the animals seen below 2,000 meters were classed as “Undefined.”

Looking through the data, Martini and Haddock were surprised to find that the proportion of glowing to non-glowing animals was pretty similar from the surface all the way down to 4,000 meters. Although the total number of glowing animals decreased with depth (something that had been previously observed), this was apparently due to the fact that there are simply fewer animals of any kind in deeper water. 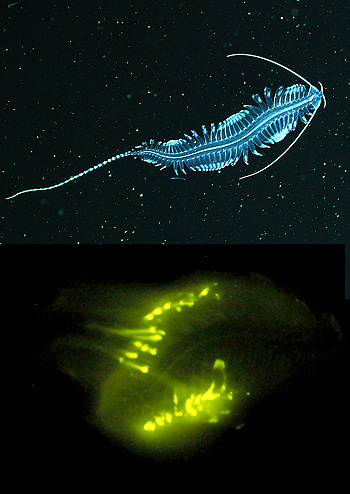 The analysis also showed that some groups of animals were much more likely to glow than others. For example, 97 to 99.7 percent of the cnidarians (jellyfish and siphonophores) in the videos are able to produce their own light. In contrast, only about half of the fishes and cephalopods (squids and octopuses) are bioluminescent.

The finding that the proportion of glowing to non-glowing animals is relatively constant at all depths suggests that scientists may be able to estimate the total numbers of animals at specific depths “just” by measuring the amount of light produced by animals at each depth. Unfortunately, researchers do not yet have instruments that can reliably measure the total bioluminescence from all animals at a given depth. But Martini is working on instruments that may be able to do this, and plans to publish her findings in a future paper.

Commenting on the significance of her research, Martini said, “I’m not sure people realize how common bioluminescence is. It’s not just a few deep-sea fishes, like the angler fish. It’s jellies, worms, squids…all sort of things.” In fact, she and Haddock concluded their paper by writing, “Given that the deep ocean is the largest habitat on Earth by volume, bioluminescence can certainly be said to be a major ecological trait on Earth.”

December 10, 2020 – At least nine major groups of deep-sea animals, including jellies, corals, brittle stars, squids, and fish, use the same light-emitting chemical, coelenterazine, to power their displays.
July 13, 2020 – A new research paper shows that some of the most common and iconic deep-sea corals can create their own light.
March 23, 2020 – Humboldt squid communicate with each other using changing patterns of light and dark pigment in their skin.
October 17, 2019 – MBARI researchers recently found that animals living on the deep seafloor are much less likely to produce light than those swimming or drifting in the “midwater.”
Researchers