This illustration shows the MARS science node in its trawl-resistant frame. The main MARS cable from shore enters the node from the left. On the right are four of the eight “extension cables” for individual MARS test experiments. Steel doors on the sides of the node can be opened so that remotely operated vehicles can plug or unplug connectors. Sophisticated electronics within the science node route data and convert the high voltage current in the cable to lower voltages needed by instruments. Illustration courtesy of L-3 MariPro.

Like a power strip at the end of an oversized extension cord, the bright-orange MARS science node lies at the end of a 52-km (32-mile) cable connecting the unit to power and computers at MBARI. Electronics within the node can route electricity and data to up to eight science experiments, each of which may incorporate multiple sensors.

The MARS power and data cable follows a 52-km (32-mile) arc across Monterey Bay to the MARS observatory site. This curved route was chosen to avoid areas of rocky bottom and submarine landslides around Monterey Canyon. Along most of its route, the cable is buried about one meter (three feet) below the seafloor to minimize its effects on marine life and reduce the chance of its being snagged by anchors or fishing gear. In order to minimize the cable’s impacts, MBARI scientists spent over a year studying the effects of a cable that runs offshore from Half Moon Bay.

The MARS science node consists of two pieces: the massive orange “trawl-resistant frame” and the electronics package, which fits inside this frame.

The trawl-resistant frame consists of a truncated pyramid made of steel plates that is 3.7 by 4.6 meters (12 by 15 feet) wide at the base and 1.2 meters (4 feet) tall. This frame protects the node’s electronic components from boat anchors or commercial fishing gear. Its smooth corners and sloping sides are designed to prevent such gear from snagging. Doors on each side of the frame can be opened, allowing remotely operated vehicles to plug or unplug experiments. 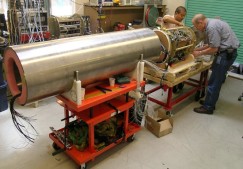 Technicians work on the electronics that fit inside one of the MARS node’s titanium pressure cylinders. After sealing, the canister will hang under the MARS node’s yellow foam block (see above photo). Photo: Kim Fulton-Bennett (c) 2005 MBARI.

The heart of the science node, the electronics package, consists of two titanium pressure housings suspended beneath a block of yellow buoyant foam. Inside one housing is electronic equipment for routing data and controlling power to the instruments. Inside the second housing is the equivalent of an electrical substation, to convert the high voltage in the cable to lower voltages used by science instruments.

Using the eight ports on the science node, each science experiment can send up to 100 megabits per second of data back to scientists’ computers on shore. Scientists, in turn are able to send commands back to reprogram or reset their instruments. 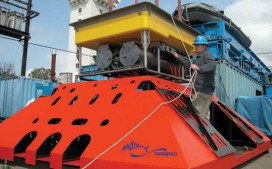 This massive orange-painted steel frame protects the node’s electrical equipment from damage by fishing nets and anchors. The frame was installed during the cable-laying process. Later, the main node, with its yellow floatation pack, was lowered into the frame by ROV Ventana. In this photo, you can see the the two pressure cylinders that contain electrical equipment for handling power and data. Photo courtesy of L-3 MariPro.