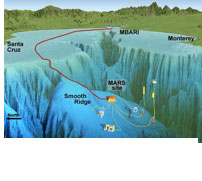 A 3-D perspective of the MARS observatory site on Smooth Ridge, at the edge of Monterey Canyon. MBARI sits at the head of the canyon, about 23 miles away from the MARS site. This deep-water site is close enough to shore so that scientists can install or modify test instruments without spending days or weeks at sea. Image: David Fierstein ©2004 MBARI.

Historically, when oceanographers have placed instruments in the ocean, these instruments have either been attached to ships or have been powered by batteries. The first scenario only allows scientists to make measurements over relatively short time periods (typically days to weeks), while the ship is at sea. The second scenario allows instruments to be deployed for longer periods of time (typically months), but does not provide any way for researchers to know whether their instruments are working properly or to control them while experiments are underway.

The MARS observatory (and other cabled ocean observatories) provide oceanographic instruments with a full-time power and data connection to shore. Such observatories allow instruments to operate indefinitely, and to perform more power-hungry measurements than would be possible under battery power.

The MARS ocean observatory has several purposes. It’s primary purpose is to provide an easily accessible, deep-water facility where researchers can test equipment and instruments that may subsequently be deployed as part of the United States Ocean Observing Initiative (OOI). It also provides a site for researchers to test ocean observing equipment that may be deployed at other sites around the world. Finally, the MARS observatory provides an opportunity for researchers to perform experiments and collect unique physical, biological, geological, and chemical data on the marine environment in the vicinity of the MARS site.

The Monterey Accelerated Research System (MARS) consists of a 52-km (32-mile) undersea cable that carries data and power to a “science node” on the deep seafloor. Science experiments can be attached to the science node using underwater data/power connectors and extension cords up to four kilometers long. The MARS science node is located on the seafloor at a depth of 891 meters (2,923 feet) below the ocean surface, on Smooth Ridge, about 25 kilometers west-northwest of Monterey.

The MARS science node has two titanium pressure housings. One housing contains electronic equipment that converts the 10,000 volts traveling from the shore cable to 375 volts (DC) used by science instruments. The second housing contains electronics that route data and control power to eight science ports. Experiments attached to each port can send up to 100 megabits per second of data through the science node and back to scientists’ computers on shore.

January 13, 2020 – Deep-Sea Connect provides a new and relatively inexpensive method for connecting instruments to MBARI's MARS ocean observatory.
November 28, 2019 – In a new paper in Science magazine, researchers describe an experiment that turned the seafloor cable on MBARI’s MARS ocean observatory into the equivalent of 10,000 seismic stations on the ocean floor.
Scroll to top