During the Coordinated Canyon Experiment, researchers collected hundreds of sediment samples from the floor of Monterey Canyon using underwater robots and “push cores” (the clear plastic tube being inserted into the sediment). Image: © 2016 MBARI

Several times a year turbulent underwater pulses of sand, mud, and water sweep down the winding channel of Monterey Canyon. Like flash floods on land, these so-called “turbidity currents” roar down the floor of the canyon, leaving a residue of sediment in their wake. A recent research paper shows that these events often carry sand-sized particles 50 kilometers (31 miles) down the canyon and leave particles of the same size behind on the seafloor. This finding is somewhat surprising because currents in the lower part of the canyon are much slower than in the upper regions.

The new paper by MBARI geologists and their collaborators also gives geologists their first quantitative, repeated measurements of how sediments move and settle during strong flow events in submarine canyons.

Turbidity currents in Monterey Canyon are invisible at the sea surface and rarely cause damage except to scientific instruments in the canyon. However turbidity currents have damaged or destroyed undersea cables and pipelines in other canyons. From a global perspective, these underwater flows are hugely important, transporting almost as much sediment as all the rivers on land. In addition, over millions of years, the sediments carried down submarine canyons may be compressed and become solid rock, which sometimes forms “reservoirs” for large oil and gas deposits.

For decades geologists have tried to understand turbidity currents by looking at the rock formations they leave behind. A few researchers have tried to study these events as they occur, but because turbidity events are so unpredictable, occur in deep water, and frequently destroy scientific instruments, such efforts have been challenging at best.

This photograph shows a cross section of sediment collected in a push core from Monterey Canyon. Most of the sediment is relatively uniform sand. Image: © 2017 MBARI

From 2015 to 2017, MBARI researchers led an 18-month, multi-institutional program called the Coordinated Canyon Experiment (CCE), which documented multiple turbidity currents over large stretches of Monterey Canyon. The CCE was probably the most extensive field experiment ever conducted in any submarine canyon to date. One of the goals of this experiment was to understand how currents and sediment movement during these events relate to the sediments that are left behind on the seafloor after the events.

In a recent paper in the journal Frontiers in Earth Science, former MBARI Postdoctoral Fellow Katherine Maier and over a dozen co-authors examined CCE measurements of currents, transported sediment, and seafloor sediment deposits.

Maier commented, “This paper presents an incredibly rare opportunity to compare sediment transported during a sediment density flow to current velocities and sediment deposits from the same flow event. Linking flows to their deposits has been a long-standing scientific challenge, particularly in submarine canyons.”

“This paper is all about the sand,” said Charlie Paull, the lead scientist on the experiment.

Throughout the experiment, researchers collected sediment using “sediment traps” suspended 10 meters (33 feet) or more above the seafloor. During turbidity events, the sediment traps collected sand that was just like the material found right on the floor of the canyon. “This suggests that the sand in the flow was stirred up into the surrounding water,” said Paull. “But,” he added, “It could also indicate that the sediment traps were pulled sideways by the current and were not as far off the bottom as we thought they were.”

In many geologic settings the size of the sediment carried by currents reflects the speed of those currents—weak currents can transport small particles of mud or silt, but stronger flows can move sand, cobbles, or even boulders. Thus one of the surprising findings in the paper was that the size of the sediment in the traps did not relate to the speed of the currents measured during the turbidity events. As Maier pointed out, “We found similar sand over 50 kilometers of canyon floor, even though the flow velocities were much lower in the deeper parts of the canyon.” 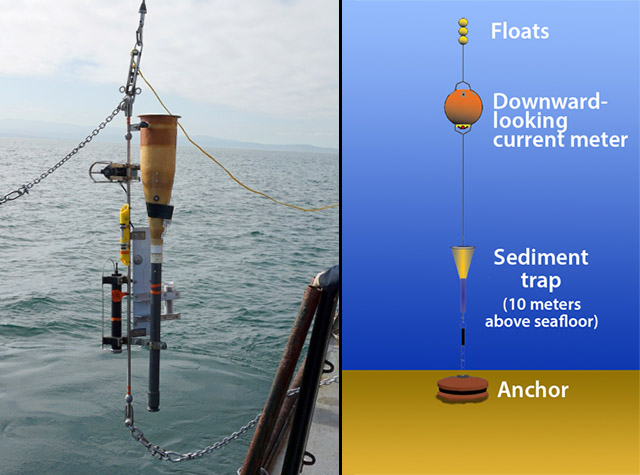 “This could indicate that the fine material is bypassing this part of the canyon, or may be transported higher up in the water column,” noted Paull. “It also shows that a significant amount of sediment is passing through the canyon but not settling to bottom and becoming part of the geologic record.”

The data presented in the paper may end up being as significant as the findings. “These are the by far the most extensive measurements ever made of sediment transport during turbidity currents.” Paull noted. “They will be extremely useful to researchers trying to make computer models of what goes on during these events.”

Maier concurred.“I think the portion of the CCE dataset presented in this recent paper will become a seminal data set.”

Reflecting on the challenges involved in collecting these data, Maier commented, “Even now, years after the experiment, I’m still impressed that we pulled it off and retrieved so much data. This experiment, and especially the sediment traps, represented a major technical challenge and risk. But in the end we were even more successful than I had hoped.”