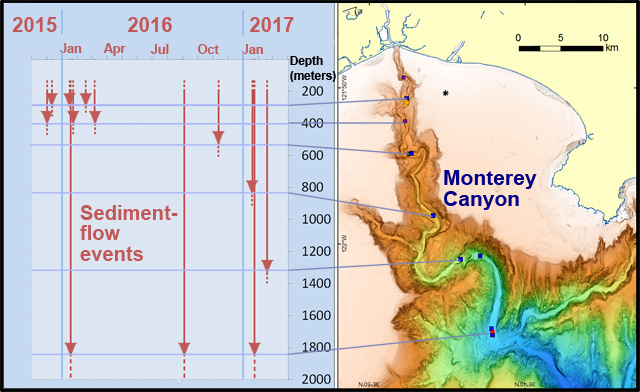 This illustration shows some of the 16 sediment-flow events documented during the Coordinated Canyon Experiment. The arrows indicate minimum estimates of how far each event traveled down the floor of Monterey Canyon. Image © 2017 MBARI

Just as rivers move sediment across the land, turbidity currents are the dominant process carrying sediments and organic carbon from coastal areas into the deep sea. Turbidity currents can also destroy underwater cables, pipelines, and other human structures. Unlike rivers, however, turbidity currents are extremely difficult to study and measure. At the Fall 2017 meeting of the American Geophysical Union, scientists from around the world will present 19 talks and posters about the Coordinated Canyon Experiment—the most extensive, long-term effort to monitor turbidity currents ever attempted. The results of this two-year project challenge existing paradigms about what causes turbidity currents, what they look like, and how they work.

The Coordinated Canyon Experiment (CCE) was conducted in Monterey Canyon, off the coast of Central California, over an 18-month period between October 2015 and April 2017. During this time, scientists observed and measured at least 16 turbidity currents using dozens of instruments at seven different locations in the canyon. These instruments allowed researchers to track sediment flows over a 50-kilometer stretch of canyon, from depths of about 250 to 1,850 meters. 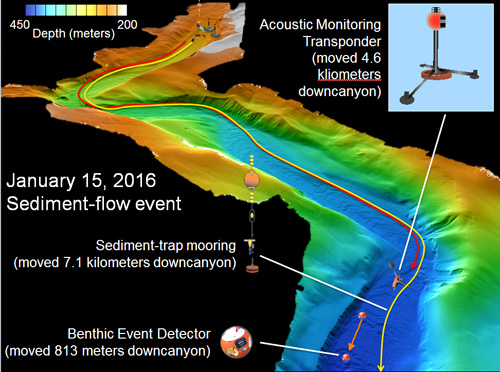 This illustration shows some of the instruments that were moved downcanyon by a sediment-flow event on January 15, 2016. Surprisingly, some large, heavy instruments traveled farther than did smaller, lighter instruments. Image © 2017 MBARI

Using a variety of new instruments and technologies, researchers collected data not just on the movement of water and sediment, but also on the evolution and shape of the seafloor. Physical processes within the flows were monitored at spatial scales ranging from centimeters to kilometers, and over time scales from seconds to months. The resulting data yielded a new and unexpectedly complicated view of a globally important phenomenon that has been studied and modeled for nearly 100 years. 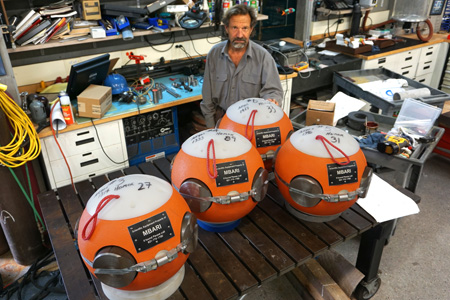 MBARI engineer Larry Bird designed and built these “electronic boulders” that can record data while being swept away or buried by sediment-flow events. Photo: Brian Kieft © 2016 MBARI

The experiment showed that sediment-transport events in Monterey Canyon are more common and much more complex than previously recognized. Rather than simply being flows of sediment-laden water, some turbidity currents also involved large-scale movements of the entire seafloor. Furthermore, many turbidity currents changed character as they moved down-canyon, suggesting that no single flow model can explain all the processes involved.

The researchers were particularly surprised to find that the timing of the 16 monitored turbidity currents did not coincide with commonly-proposed triggers, such as earthquakes or floods, and only a few coincided with extreme surf events. One possible explanation is that sediments build up gradually within and around the edges of Monterey Canyon until they reach some certain threshold, after which turbidity currents can be triggered by relatively small canyon-wall failures.

This graphic shows some of the high current speeds measured in different parts of Monterey Canyon during the January 15, 2016 sediment-flow event. Image © 2107 MBARI

Of particular interest to geologists searching for oil and gas deposits, the quantitative sediment measurements and detailed seafloor and sub-bottom surveys used in this experiment gave geologists their first opportunity ever to correlate turbidity currents of known magnitude, extent, and duration with large- and small-scale sedimentary structures observed firsthand on the seafloor. After millions of years, these same sedimentary structures sometimes form conduits or traps for oil and gas in sedimentary rocks.

The Coordinated Canyon Experiment yielded many other firsts in the field of marine geology: