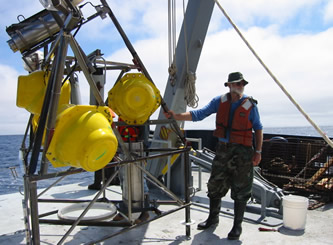 The Station M study represents one of the most detailed investigations of any abyssal area in the world ocean. Over this 25-year time series study, we have continuously monitored the amount of sinking particulate matter through the benthic boundary layer (bottom 600 m of the water column and seafloor).  Sinking organic matter is the only source of food to seafloor communities at Station M.  We use time-lapse photography to record the dynamic responses of animals there to changes in food availability (see video). The Benthic Rover measures how much oxygen is consumed by microbes and animals living in the seafloor sediments.  By measuring how much food makes it to the seafloor, and how much is consumed there, we estimate how much carbon is being sequestered in the deep sea over time. Rising atmospheric and surface ocean temperatures are projected to cause a global decrease in sinking organic matter from the upper water column to the seafloor.  Such changes would alter benthic community biomass, composition and functioning. Data from the Station M abyssal time series are being used to model carbon flow to predict how changes in atmospheric and sea surface temperatures will affect deep-sea benthic communities and the oceanic carbon cycle. 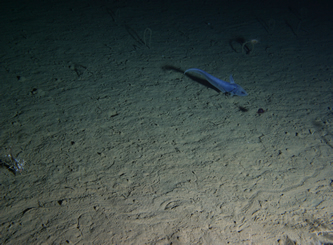 The seafloor at Station M is characterized by silty-clay sediments with little topographic relief (< 100m over 1600 km2). Surface waters of the California Current over this site generally have high primary production by phytoplankton in the spring and summer, although this varies year to year. This temporal signal in surface production is observed throughout the water column and into the sediments. Measurements at Station M are made with a variety of instruments. Sinking particulate matter, consisting of phytoplankton detritus, zooplankton fecal material and amorphous flocculent material, is collected with sequencing sediment traps moored at 50 and 600 m above bottom. Current flow is measured with current meters on the Rover and on the camera tripod. The activities of mobile animals just above the seafloor (e.g. grenadier fishes, jellyfish and sea cucumbers) and on the sediment (e.g. brittle stars, sea cucumbers, sea urchins) are observed using a time-lapse camera tripod. Video transects of the seafloor are taken by the remotely operated vehicle Doc Ricketts. Oxygen consumption, a measure of biological activity, of organisms living in the sediments on the seafloor is measured by the Benthic Rover.  The Benthic Rover works robotically on the seafloor for nearly a year a a time, taking measurements and photographs as it moves along the seafloor.

Significant findings of these studies at Station M: