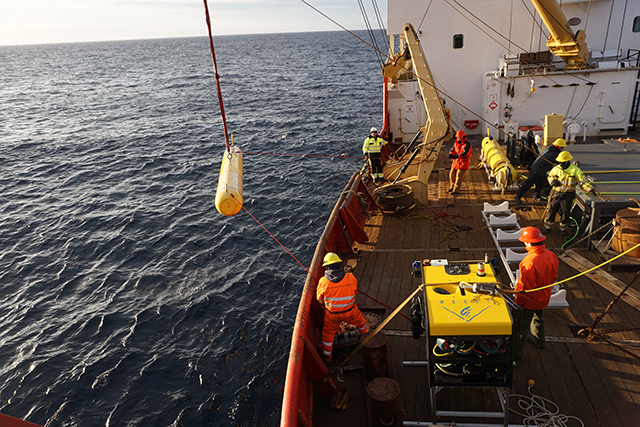 Just over a decade ago, researchers knew little about the characteristics and unique processes that shaped the seafloor at the edge of the Canadian Beaufort Sea—once one of the least accessible regions on Earth. A new study published in Marine Geology suggests several mechanisms to explain an abundance of scars left by submarine landslides along the edge of the Beaufort Sea’s continental slope. The work is shining a light on this region of the Arctic Ocean, providing valuable insight into a rapidly changing environment.

Located north of Alaska and Canada, the Beaufort Sea lies on the edge of the Arctic Ocean. In the past, sea ice covered most of the region year-round, making it difficult for researchers to map and learn more about the seafloor. But recently, warmer temperatures have reduced the ice cover, opening accessibility to the Beaufort Sea for a few weeks in late summer.

By 2009, the extent of the Arctic Ocean ice cover had retreated far enough to enable systematic mapping of a large ice-free zone on the seaward edge of the continental shelf and upper continental slope of the Canadian Beaufort Sea. “These new bathymetric maps revealed a remarkable collection of unusual seafloor features, including slide scars and mud volcanoes,” said Charlie Paull, MBARI’s lead investigator for the study.

Together with researchers from various Canadian organizations and the Korea Polar Research Institute (KOPRI), Paull has now made five trips to the Arctic to explore this region further and investigate the features initially revealed in regional-scale mapping. These expeditions have focused on utilizing MBARI’s fleet of robotic vehicles to observe and study the seafloor.

Among these were MBARI’s MiniROV—a small remotely operated vehicle (ROV)—developed and built by MBARI engineers Dale Graves and Alana Sherman with partial support from the Canadian government. The researchers also added mapping autonomous underwater vehicles (AUVs) to their data-collecting flotilla.

For this study, Paull and his team focused on understanding underwater landslides. As a result of their extensive mapping efforts, the researchers noticed that the landslide scars on the sides of the Beaufort Sea were unusually large and numerous. Submarine landslide scars marked the entire lower continental slope below 1,200 meters (3,900 feet), and in places, the scars of the slope failures extended up to the shelf edge. “Our goal was to determine what caused these massive slope failures. In particular, we’re interested in whether these failures were stimulated by conditions that may be unique to the Arctic setting,” said Paull. Essentially, what makes this area so vulnerable to landslides?

To answer this question, the research team used AUVs to collect detailed bathymetric surveys and create high-resolution seafloor profiles of these unique benthic habitats. The MiniROV was deployed to gather observations, sample gas-venting features, document recent mud volcano activity, and record video footage of the seafloor. The AUV surveys and ROV observations provided a few possible answers along with more mysteries for the researchers to decipher!

One cause for the increased occurrence of landslides may have been the rapid accumulation of glacial marine deposits. Digging into the region’s history, the researchers believe that large amounts of sediments may have accumulated rapidly during glacial times. This would increase pressure on the sediment layers below, weakening their cohesiveness, and leading to an unstable slope structure. But these high sedimentation rates ended more than 10,000 years ago, which leaves a gap in the timeline for the slope failure events. What other factors may have contributed to these landslides since then?

Sediment cores collected on these cruises provided additional clues. MBARI Senior Research Specialist Roberto Gwiazda analyzed the waters found within the pore spaces of the sediments along the slope and found that they freshen with depth, which was unexpected, and suggests the possibility that brackish waters may be widespread within the subsurface.

The MiniROV found several curious mounds, each with a distinctive orange iron-oxide-rich crust. These are known to form where brackish waters seep out onto the seafloor in coastal environments. The researchers also noticed shimmering waters rising above these peculiar mounds, which indicates upward flowing brackish-water. This was the first observation of brackish fluid flowing from the seafloor in waters more than half a mile deep. These brackish spring flows signal that over-pressured conditions are present, which may have compromised the mechanical strength of the seafloor sediment and contributed to slope failure. But how widespread are these brackish waters along the slope? Is their occurrence extensive enough to be the cause of the landslides, or are other factors involved?

“I am hoping that we will be able to return with our Korean colleagues in 2022 to conduct repeat mapping surveys and determine if measurable changes have occurred in the shape of these submarine landslides and other features over the last decade,” said Paull.

In just five cruises, with the assistance of MBARI’s MiniROV and mapping vehicles, this region has transformed from almost unknown to having some of the best-surveyed submarine features in the world. This information is increasingly critical as warming temperatures make the Arctic more accessible to humans. Paull adds, “I think it is very important to learn about the environment in the Arctic before it changes further.”