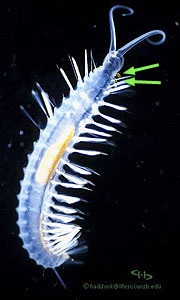 One of the first green bombers (Swima bombiviridis) collected from Monterey Bay and photographed by Steve Haddock of the Monterey Bay Aquarium Research Institute. Several green bombs are visible near the animals long coiled head palps.

Deep-sea worms have evolved an amazing array of body types and survival strategies. Some worms have spherical bodies that drift in the currents like little transparent marbles with mouths. Other worms have developed “roots” that burrow into and digest whale bones. The latest addition to this collection of oddities is a group of swimming worms with small oval sacs of fluid hanging from their bodies, just behind their heads. When the worms are disturbed, they release these sacs, which then emit a bright, luminescent green glow.

The lead researcher in this discovery, Karen Osborn, began studying these “green bomber” worms while working as a researcher at MBARI. She has since become a postdoctoral fellow at the Scripps Institution of Oceanography. Osborn and her co-authors describe seven new species of worms in the August 21 issue of the journal Science. She speculates that the worms release their glowing sacs as a defensive measure to distract predators. Osborn also points out that this discovery of an abundant, but previously unknown group of deep-sea animals “emphasizes our limited knowledge of deep-sea pelagic and demersal communities.”

For more information on the “green bomber worms,” see the news release issued by the Scripps Institution of Oceanography.

Note: The photograph of the green bomber worm above was taken by MBARI scientist Steven Haddock, who is a co-author on this paper. Two small green “bombs” are visible just below the animal’s head.