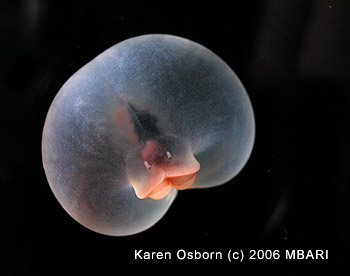 This is a worm? This photograph of the newly named worm shows its mouth, which typically faces downward as the animal drifts about 1,000 meters (3,300 feet) below the ocean surface. Image: Karen Osborn (c) 2006 MBARI

It sounds like a junior high school riddle—”What lives 3,000 feet below the ocean surface, is about the size of a marble, and looks like the back side of a pig?” MBARI marine biologists have pondering this riddle for years, having seen a number of these strange, round organisms during deep dives in Monterey Canyon. MBARI biologist Karen Osborn and her colleagues recently came up with an answer to this riddle by combining modern DNA analysis with traditional methods of scientific observation. What they discovered was a new species of deep-sea worm, but a worm like no other. In a recent scientific paper, they gave this little creature a Latin name: Chaetopterus pugaporcinus.

Although this animal looks unlike any adult worm known to science, coauthor Greg Rouse noticed that it had some features in common with the larvae (young) of a group of worms called chaetopterids. However, as Osborn and her coauthors wrote, “If the specimens described here are larvae, they are remarkable for their size, which . . . is five to ten times larger than any known chaetopterid larvae.” The animals also lacked certain body parts typically found on chaetopterid larvae.

At this point, the researchers began to suspect that they might have an adult worm on their hands (or in their sampling containers). However, all known adult chaetopterid worms have elongated, segmented bodies, and spend their lives inside parchment-like tubes attached to the seafloor. 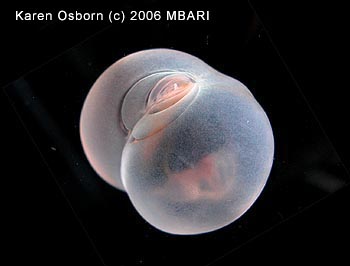 This photograph shows the back of the newly named worm. The concentric ovals are body segments that have been flattened against a single central segment that has ballooned out to form the bulk of the worm’s body.
Image: Karen Osborn (c) 2006 MBARI

Looking closely at specimens of the new worm, the researchers found that although the worms had segmented bodies, one of their middle segments was inflated like a balloon, giving the animals a distinctive gum-ball shape. All the other segments were compressed up against the front and back of the inflated segment, like a cartoon character whose nose and hind-parts have been flattened in an unfortunate accident.

Even after the scientists figured out that they had found a new chaetopterid worm, there was no easy way to classify the creature because of its unique features. Chaetopterid worms are a pretty motley bunch in the first place, with dozens of species living in a wide variety of seafloor habitats. As Osborn put it, Chaetopterus is “a genus fraught with taxonomic controversy.”

Given the twisted chaetopterid family tree, Osborn and her coauthors decided to use modern DNA analysis to figure out who was related to whom. After analyzing the DNA from dozens of worms, the researchers created the first family tree that shows the relationships between 12 species of chaetopterid worms (including their new species)—a significant scientific feat in its own right. 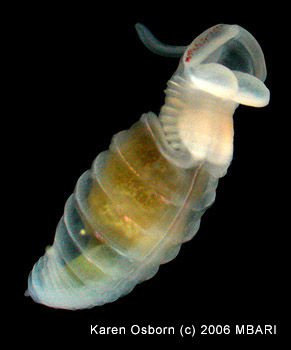 To understand more about the new worms, the researchers combined these modern analytical techniques with the time-honored biological approach of making direct, meticulous observation of live animals in their native environment and of dissected animals in the laboratory. One thing they noticed was that all the worms were drifting at depths of about 900 to 1,200 meters (3,000 to 4,000 feet) below the ocean surface. Furthermore, the worms seemed to hang out in this particular depth range even when the seafloor itself was thousands of meters deeper.

The researchers suspect that their new worm may prefer these depths because this is where its food is. They often saw the worms drifting with their mouths downward, surrounded by a small cloud of mucus. They believe that the worms use this cloud of mucus to catch particles of marine snow—bits of dead organisms and fecal matter that drift down from the surface waters. The depth at which the worms hang out (just below the oxygen minimum zone), is particularly rich in marine snow.

The researchers still aren’t sure if the worms they have been studying are larvae or adults. None of the individuals they collected had any identifiable sex organs, eggs, or sperm. Thus, they could be, as the authors put it, “wayward larvae, swept off the continental shelf and unable to settle [to the seafloor], thus growing to unusual size and developing adult features.” 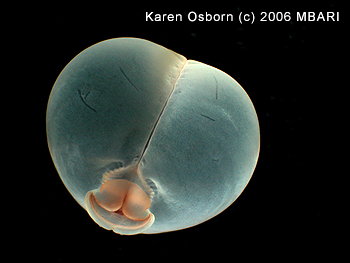 To test this hypothesis, the researchers placed one of the captured animals in a salt-water aquarium with deep-sea sediment and rocks on the bottom. But the creature seemed content with its drifting lifestyle and showed no signs of settling down to the bottom of the tank.

Another possible scenario (and one favored by the researchers) is that this species of worm is in the process of making an evolutionary “leap”—giving up a life on the seafloor and taking up a new life floating in the water column. This would be a spectacular achievement for a creature whose (newly assigned) Latin name translates to “Chaetopterid worm that looks like the rump of a pig.”