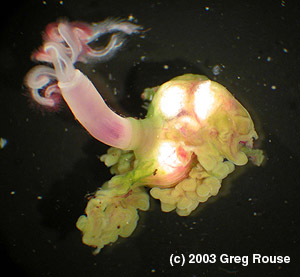 Laboratory photo of one of the newly discovered bone-eating worms, Osedax frankpressi, which has been removed from a whale bone. Normally only the red and white plumes and the pinkish trunk would be visible. The greenish roots and whitish ovary would be hidden inside the bone.
Image credit: (c) 2003 Greg Rouse

MOSS LANDING—Scientists studying a whale carcass in Monterey Canyon recently announced the discovery of two new species of unique worms that feed on the bones of dead whales. In the July 30 issue of Science, the researchers describe these worms, whose bodies and feeding strategies differ from those of any other known animal. The worms have no eyes, legs, mouths, or stomachs, but they do have colorful feathery plumes and green “roots.” They use the roots to infiltrate the bones of dead whales, digesting the fats and oils inside with the help of symbiotic bacteria. Marine biologist Greg Rouse, from the South Australian Museum, worked with scientists Shana Goffredi and Robert Vrijenhoek at the Monterey Bay Aquarium Research Institute (MBARI) to classify the new worms, placing them in a new genus called “Osedax,” which is Latin for “bone devourer.”

The most visible features of Osedax rubiplumus and Osedax frankpressi are their reddish feathery plumes, which extend into the water and act as gills. The plumes connect to a muscular trunk, which can be withdrawn into a transparent tube when the worms are disturbed. At the other end of the trunk, hidden inside the whale bone, the body widens to form a large egg sac. The greenish roots, branching off from the egg sac, are filled with bacteria that break down oil in the whale bones.

The scientists were initially puzzled by the fact that all the worms they collected were females. However, while examining the two- to seven-centimeter-long female worms under a microscope, they discovered that most females had dozens of microscopic male worms living within their bodies. These male worms looked as if they had never developed past their larval stage—their bodies still contained bits of yolk—but they also contained copious quantities of sperm. 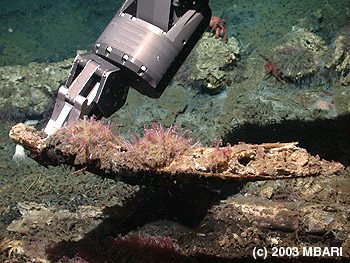 The researchers also observed that female worms of all sizes were full of eggs, which led co-author Vrijenhoek to comment, “These worms appear to be the ecological equivalent of dandelions—a weedy species that grows rapidly, makes lots of eggs, and disperses far and wide.” This strategy makes sense considering that these worms can only live on dead whales. After a whale skeleton has been consumed, all the worms at that site will die off. Before this happens, they must release enough eggs or larvae so that some tiny proportion will be transported by the ocean currents until they can find and colonize another whale carcass.

Rouse notes that, “Because of the highly unusual anatomy of the females, at first we were at a loss to know what type of animal Osedax was.” But after examining key portions of the worms’ DNA, the researchers determined that the whale-fall worms are closely related to the large tube worms found at deep-sea hydrothermal vents and cold seeps. Both types of worms obtain nutrition with the help of symbiotic bacteria.

Further analysis of the DNA data yielded some surprising results. For example, after looking at the amount of variability in the worms’ mitochondrial DNA (which is assumed to change at a relatively constant rate over time) they concluded that the two new worm species’ most recent common ancestor lived roughly 42 million years ago, about the same time whales themselves first evolved. The worms’ genetic diversity also suggests that they are part of an actively breeding population that includes hundreds of thousands of individuals—a population that has presumably been hidden from human eyes in the vastness of the deep ocean. This further implies that, as Vrijenhoek put it, “there must be a lot of dead whales out there.”

Photo montage of the whale fall in Monterey Canyon, as it appeared in February 2002, soon after its discovery. Note the large numbers of red worms carpeting its body. The small pink animals in the foreground are scavenging sea cucumbers. Image credit: (c) 2002 MBARI

After studying the dead whale in Monterey Bay for over a year and half, Vrijenhoek and Goffredi have come to the conclusion that the two new worm species are but the tip of the iceberg (or perhaps the tip of the whale’s tail). Whale carcasses—or whale falls, as they are called—represent a massive input of food into the generally food-limited environment of the deep sea. One whale fall can provide as much organic material as thousands of years of marine snow, the organic debris that drifts down from surface waters to sustain life in the deep. Whale-fall specialist Craig Smith of the University of Hawaii has identified entire ecosystems with hundreds of different animals that have developed around a single whale fall. Some of these communities may be sustained for decades on the oil-saturated whale bones. The MBARI scientists will describe the unusual animal community at the Monterey Canyon whale fall in a paper to be published in the October 2004 issue of Deep Sea Research.

Like the animal communities around deep-sea hydrothermal vents, whale-fall communities evolve around highly localized, ephemeral sources of food. At hydrothermal vents, sulfides spewing from the vents are consumed by bacteria, which in turn provide nutrition for animals. Similar food webs and sulfide-dependent organisms have been observed at whale falls, where sulfides may be produced by bacterial decay of whale tissue. However, the symbiotic bacteria in Osedax spp. worms represent an entirely different evolutionary strategy—they break down whale-bone lipids (fats and oils) directly to provide food for the worms. This is the first time that a lipid-degrading bacteria has been observed in a symbiotic relationship. Co-author Goffredi has been studying this relationship and is currently preparing a separate paper on the topic.

Although whale falls have been studied at several sites along the California coast and elsewhere, the whale fall in Monterey Canyon is the deepest studied to date. Its great depth (2,891 meters) may explain why some of the animals at this site have never been seen before. In addition to the newly named species, the researchers collected between four and six additional unidentified worm-like animals from the whale carcass. While not as extraordinary as Osedax, these previously unknown animals underline the previously unimagined biodiversity and unique adaptations of organisms in the deep sea. 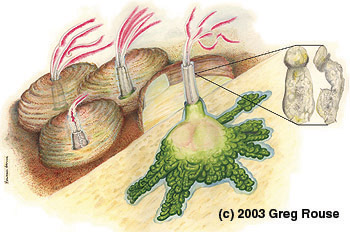 Illustration of one of the newly discovered bone-eating worms, Osedax frankpressi, showing the large female worms in their tubes and with whalebone ‘cut away’ to reveal their large ovisacs and extensive roots that invade the bone. The small males live in the tubes of the females and are shown as ‘blowups’ with their relative positions in the tubes indicated by the dark lines. Females are shown as either contracted into their tubes, as occurs when they are disturbed, or fully extended with their feathery plumes out in the water. Painting by Howard Hamon. 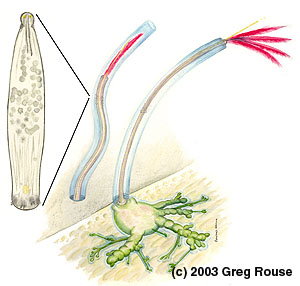 Illustration of one of the newly discovered bone-eating worms, Osedax rubiplumus, showing the large female worms in their tubes and with whalebone ‘cut away’ to reveal their large ovisacs and extensive roots that invade the bone. The small males live in the tubes of the females and are shown as ‘blowups’ with their relative positions in the tubes indicated by the dark lines. Females are shown as either contracted into their tubes, as occurs when they are disturbed, or fully extended with their feathery plumes out in the water. Painting by Howard Hamon. 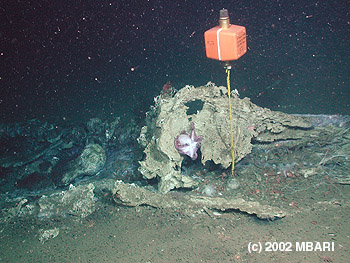 View of the skull of the dead whale in Monterey Canyon, as it appeared in October 2002. Note the purple and white octopus, one of many animals that have colonized the whale fall. The orange float supports a homing beacon that allows scientists to find the whale each time they dive at this site, at almost 3,000 meters depth.