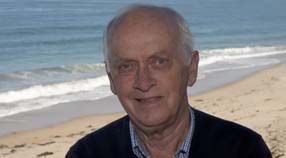 Last Thursday, the American Geophysical Union (AGU) awarded the prestigious Maurice Ewing Medal to MBARI marine chemist Peter Brewer. This medal is given annually to recognize “significant original contributions to the ocean sciences,” including “the advancement of oceanographic engineering, technology, and instrumentation, as well as outstanding service to the marine sciences.”

Over the past four decades, Brewer has performed pioneering research in the changing chemistry of the oceans. His recent work has focused on the interaction of greenhouse gases with seawater, the impacts of ocean acidification, and the fate of hydrocarbons released in the deep sea. In pursuing this research, Brewer’s research group at MBARI developed and used a variety of high-tech equipment, including tools that allowed MBARI’s remotely operated vehicles to track gasses and fluids rising through the water column, a deep-sea laser-Raman spectrometer, and automated systems for testing the effects of ocean acidification on marine animals in their natural environment.

Established in 1974, and jointly sponsored with the United States Navy, the Ewing Medal is named in honor of Maurice Ewing, a pioneering geophysicist. Ewing was the first director of the Lamont-Doherty Earth Observatory, and made significant contributions to marine geology and our understanding of the deep seafloor.

Brewer joins a list of prominent ocean scientists who have received this award, including Wallace Broecker, Fred Spiess, and Charles Keeling, as well as MBARI’s former director, Marcia McNutt. Walter Munk, a former member for MBARI’s board of directors, was the first recipient of this medal in 1974, the year that Maurice Ewing died.