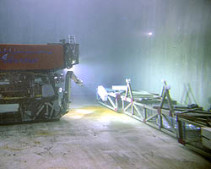 This photo shows the flume for the FOCE experiment underwater in the MBARI test tank, along with the remotely operated vehicle Ventana. Seawater enriched with carbon dioxide will be sent down this flume, mixing as it goes. In the center of the flume is an open area where animals on the seafloor would be exposed to the slightly acidified seawater. Image: Todd Walsh, ©2008 MBARI.

What does carbon dioxide enrichment mean?

Since the late 1950s, scientists have observed that the concentration of carbon dioxide (CO2) in the Earth’s atmosphere is increasing. In the last few decades, studies have repeatedly shown that most of this additional carbon dioxide is coming from cars, power plants, and a variety of human activities.

Botanists in particular, have been curious how this increase in carbon dioxide would affect plant growth. However, they soon discovered that experiments on plants within the controlled environment of a greenhouse could not take in to account all of the complex biological and chemical processes that occur in a natural forest or meadow.

To address this issue, researchers eventually came up with the idea of “Free-air CO2 enrichment” (FACE) experiments. These typically consisted of a ring of pipes up to 100 meters across and 15 meters high that emitted carbon dioxide though hundreds of tiny holes. The idea was that these rings could be constructed around a section of a forest, meadow, or field, to bathe the plants within the ring in air that had a relatively constant, but higher-than-normal concentration of carbon dioxide.

Carbon dioxide affects the oceans as well as the atmosphere

Within the last decade or two, scientists have begun to realize that the oceans are absorbing roughly one third of all the CO2 that humans release into the atmosphere. This is having significant effects on the chemistry of the oceans, as well as on marine plants and animals. For example, adding carbon dioxide to seawater causes it to become more acidic, just as adding carbon dioxide gas to water causes the resulting soda water to become more acidic.

Marine biologists have already begun testing the effects of increasing carbon dioxide and ocean acidification in laboratory studies, and in enclosed field experiments. However, just as on land, these experiments cannot duplicate the complex interactions that occur in the open ocean.

In the FOCE project, MBARI researchers are trying to build a portable system that could be placed in the deep sea to raise the carbon dioxide content of the seawater over a small section of seafloor. Ideally, this system would be left in place for weeks or even months, creating a controlled environment within which biologists could study the effects of the carbon dioxide on the seafloor animals living in the test area.

The evolution of FOCE experiment

The FOCE team, led by marine chemist Peter Brewer, started out building a small, circular enclosure of pipes that was essentially a smaller version of the FACE systems used on land. However, during field and tank testing, they found that CO2 released in the ocean behaves differently that CO2 released in the atmosphere. The gas not only mixes with the surrounding seawater, but it also reacts chemically with the seawater itself. These reactions can take several minutes to complete. Because the ring of pipes in the original FOCE design was only two meters across, ocean currents would carry the enriched seawater out of the ring before it could react completely with the surrounding seawater.

To address this challenge, MBARI chemists and engineers worked together to design a new FOCE system. This system consists of a long, rectangular flume with a series of baffles. CO2-enriched seawater is released at one end of the flume, then mixes and reacts with the surrounding seawater as it flows slowly around the baffles. In the middle of the flume is a test area, where a 1-meter square of seafloor is exposed to consistently elevated concentrations of CO2.

The FOCE team tested their design by building a small flume and carrying it to the deep seafloor using the remotely operated vehicle (ROV) Ventana. The ROV supplied power and controls for the experiment, but the experiment could only be run for a few hours before the ROV had to return to the surface. By attaching the FOCE apparatus to the MARS observatory, researchers will be able to run experiments for days or weeks at a time. This will provide the first carefully controlled studies of ocean acidification on deep-sea animals in their native habitat.