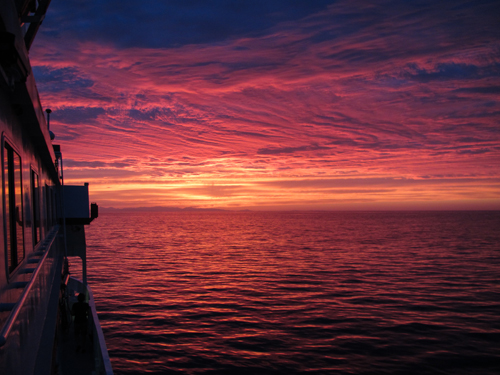 Bob Vrijenhoek writes: Today we finished the last dive of Leg 6. It was a productive day and it started somewhat auspiciously. The wind was blowing close to 20 knots at 6:00 a.m., just before launch time. Would it increase or decrease during the next half hour? Luckily for us, Captain Andrew McKee made the right prediction and the ROV was promptly launched at 6:30 a.m. as the winds began to subside.

Although it was still a little rocky aboard the R/V Western Flyer, we were excited about returning to newly discovered hydrothermal vents in Pescadero Basin. The ROV’s descent to the bottom at 3,680 meters depth took a little over two hours. So we had plenty of time to eat breakfast, take showers, and prepare for another day watching as Doc Ricketts conducted its 757th dive.

As this expedition has progressed, we have improved our abilities to take video transects up and down vent chimneys. One goal of this return to the Pescadero Basin was to carefully document the unusual chimneys at this site. Unlike the “black smokers” at Alarcón Rise, the Pescadero chimneys emitted clear shimmering water and appeared to be made from carbonates. Broken rocks that fell off the chimneys revealed white crystalline edges, rather than the typical black and rust-colored polymetalic sulfides and oxides of Alarcón chimneys.

We were able to collect pieces of one chimney for our colleague, MBARI geologist David Clague, who first explored this site but had very little time to sample due to the poor weather (see cruise log for Leg 5 on April 12, 2015). We are anxious to get him some samples to learn more about these unusual chimneys and their chemical composition.

The video transects we conducted, and samples we collected from four chimneys should provide Clague’s team with much needed information about the morphology of these structures and factors involved in their growth. This information will inform us about the geochemical processes that support these unusual chemosynthetic communities.

Perhaps our most striking observations were the differences in biological communities inhabiting the Pescadero and Alarcón hydrothermal vents versus the Pescadero transform-fault cold seeps. The three habitats were no more than 70 kilometers (40 miles) apart. Such short distances are surely within the average dispersal distances for most of the vent and seep worms, clams, and crustaceans, and yet the communities in each location were composed of different species.

All of these mouthless and gutless worms rely entirely on internal symbiotic bacteria for nutrition. Our previous studies showed that the species of bacteria differ between hot vent and cold seep habitats. The worms must be newly infected by free-living forms of the symbiotic bacteria when they settle at a vent or seep.
We suspect the resident bacteria play a critical role in shaping these communities, and testing that hypothesis is one of our primary goals.

Yet these “bottom-up” processes are not the only factors affecting these communities. “Top-down” processes like predation might also play a role, because Bythograea crabs and Branchinotogluma scaleworms (tubeworm predators) are abundant at the Alarcón site, but not observed at Pescadero hot vents or the transform cold seeps. Other organisms were shared among the sites including zoarcid fish andMunidopsis squat lobsters, but we still have to determine if the species are the same. That will happen after specimens return to MBARI.

Now the dive is over and we are transiting back to La Paz. The sea has calmed and the scientists are busy cataloging, preserving, and freezing biological specimens, rock samples, and sediment cores. Everyone seemed very cheerful about the day’s work. But as we stopped to watch the sunset over Baja California we were a little sad that our expedition has come to an end.

The pilots are busy cleaning and checking ROV Doc Ricketts and getting her ready for the transit to San Diego and Leg 7 of the expedition, lead by geologist Charlie Paull. I thank the pilots profusely for their professionalism and dedication. As scientists, we depend completely on their skills to keep the ROV running and to conduct the science and sampling while on the ocean bottom.

Captain Andrew McKee and his crew also deserve special thanks for maintaining a safe ship and getting us to our destinations. I also thank my fellow scientists and Mexican collaborators Yosselin Tapia and Diana Salcedo for their hard work and enthusiasm during this remarkably productive cruise.

Finally, our biology leg would not have been possible without the significant prior efforts of the Gulf of California mapping team lead by David Caress and his colleagues aboard the R/V Rachel Carson. Their high-resolution bathymetric maps produced during 2012 and 2015 allowed Dave Clague and his team to discover and explore the new vents and seeps that we targeted for our expedition. These productive collaborations between marine-operations, engineering, and science staff are what make MBARI such a unique and rewarding place to work.