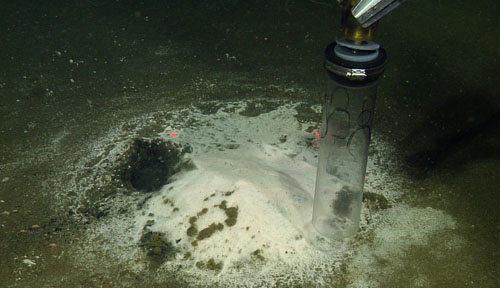 The manipulator arm samples a dense, white bacterial mat with a push core. The red spots are lasers from the ROV that are 29 centimeters apart.

Shana Gofffredi writes: At 7:03 AM, we set sail on a cool overcast day from La Paz, Mexico, aboard the R/V Western Flyer. The 10 scientists onboard all specialize in various aspects of deep-sea biology, ecology, evolution, taxonomy, and microbiology. The main goal for the expedition is to explore newly discovered deep-sea hydrothermal vents and seeps at the southern end of the Gulf of California, but today we made a short two-hour transit to a shallow site at 410 meters deep. The Alfonso Basin is an area of extremely oxygen-depleted waters (measured at 0.04 milliliters per liter, roughly 0.2 percent of the oxygen concentration of surface waters), which makes it interesting to compare to other sites on the seafloor. This site was explored previously in 2012 by our Chief Scientist Bob Vrijenhoek.

The ROV Doc Ricketts was launched from the moon pool just before lunchtime. When we reached the seafloor, we noticed large bacterial mats and a number of fish, squid, and shrimp, making us wonder how these active animals survive with such little oxygen. We spent approximately four hours exploring the area, taking push cores of sediment and orange and white bacterial mats, and using the suction sampler to collect animals. Our most unusual observations were on numerous, small mounds on the seafloor filled with sediment that resembled mousse and containing strangely shaped objects that could not be identified until we had them onboard the ship and under the microscope. They turned out to be the shells of three species of pelagic pteropods, within the family Cavoliniidae, that were somehow deposited in discrete mounds on the seafloor in this area. We have several new hypotheses about how they got there, but no one idea seems better than the others.

The Gulf of California has a unique seafloor spreading system with short ridge segments connected by longer transform faults. The unusual geological processes underlying the hydrothermal vents and hydrocarbon seeps in this region provide unique opportunities for us to examine the geochemical conditions that influence the vent and seep communities. We expect these communities to be distinct from the communities at the well-studied hot vents to the north in Guaymas Basin and to the south at 21°N on the East Pacific Rise. Thus, we anticipate discovering new vent and seep species.

Their identification and taxonomic descriptions are timely because human activities affecting climate change can dramatically alter marine environments, even at great depths. When a new species is collected, it must be thoroughly described, from a morphological and molecular perspective and then deposited in a research museum (this specimen is called the holotype) and named, using proper Latin nomenclature. The Census of Marine Life estimates the number of species living in the deep-sea to be as high as 10 million, and yet only a fraction of those are known today. During the next eight days of exploring the GOC vents and seeps, we hope to add to our knowledge about the fascinating diversity of animal life on this planet.