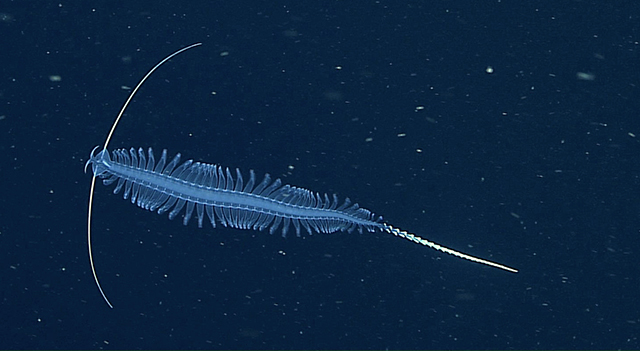 This year, I received the best birthday present—an invitation to go on a six-day expedition out in Monterey Bay on the R/V Western Flyer with Kakani Katija’s BioInspiration Group at MBARI! Hey y’all, my name is Diana Li, and I’m a recent graduate from Stanford’s Ph.D. program in Biology.

I studied how the physics of the ocean influences squid swimming, and Kakani was one of my research mentors. I love learning about how animals use their bodies to move through different environments; this is my first time exploring that on the Western Flyer. All of my previous research focused on squids found in relatively shallow water. Here we are not only seeing animals who reside hundreds of meters below the surface, but we are fortunate enough to bring them up and onto the boat to study them further.

Yesterday morning, we deployed the ROV Doc Ricketts in search of deep-sea worms and jellies. One of the worms we’re very interested in is Tomopteris, a strange but cute creature that has a bunch of fat little paddles along its body to help it swim.

As with many animals that live far away from us, we don’t know much about how Tomopteris is actually swimming and how it coordinates all those little paddles. We combine many modes of observation to learn about these deep-sea creatures. We start with video from the camera on the ROV of the animal in its natural habitat. Then we collect it either by guiding it into a sample bucket attached to the ROV or gently suctioning it into a bin. Once the ROV comes back to the surface with the animals, we get to work by videoing them in the lab.

We are also hoping to use a special technique called particle image velocimetry (PIV), which allows us to observe and analyze the flow of water around the animal. This allows us to actually measure not just animal speed and acceleration but also the forces generated by its movements and how efficient its swimming is. PIV involves lasers, high-speed cameras, and even more animal luck. As I’m writing this, the ROV has just descended from the ocean’s surface—fingers crossed we collect some more deep-sea squishies for our experiments tonight!