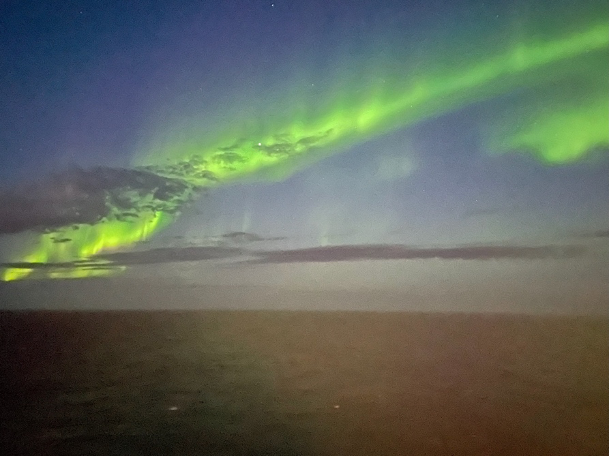 Sights and Sounds, Forecasts and Friendships:

Any interdisciplinary research expedition undoubtedly has some subdivisions even though we share a common goal. Expedition ARA13C is no exception; we have teams dedicated to seafloor mapping, geophysics, coring, oceanography, microbiology, mercury and methane, just to name a few. We come together regularly to share ideas at the daily science meeting or mealtimes, but no two words can bring us together more quickly than “northern lights.”

The night of September 1st (or rather, the early morning of September 2nd) was the magical gathering moment. Despite a mediocre aurora forecast, calm weather and clear skies during the day led to plans to stay up, or even wake up, to check the early morning sky. Only a few hours of true darkness meant that our timing had to be just right. For the coring team, who are often working late into the night, a green glow in the sky around one in the morning captured their attention. Another group of folks would have slept through the entire thing if it hadn’t been for the kindness of their colleagues who roused them from their slumber by knocking on doors and calling rooms.

The energy on the helideck—an open-air deck located relatively high on the ship—was contagious. Those who planned to stay up were dressed for the occasion in warm clothing and toques (when in Canada, right?), and those roused from their bunks wore pajamas and whatever jackets they could quickly grab. Despite the level of preparation (or comfort against the elements), we all wore smiles. The dancing lights tried to avoid our attempts to capture them with our cameras, but a few lucky ones came away with beautiful photos that hinted at the majesty of the spectacle. A better aurora forecast came a few days later, but sadly, misty fog on the eve of stormy weather prevented us from seeing the lights again.

Prior to the storm, we planned our science targets to avoid deploying or recovering equipment in rough seas. The captain made the decision to move north to miss the worst of the weather, which meant checking another box on our collective Arctic checklist–seeing the sea ice! While still far from the main body of pack ice, our first glimpse of some “berg-y bits” generated some excitement. Lots of photos were taken with the expectation that those chunks may be the only sea ice we would see on the expedition, given that our survey operations were, by design, meant to avoid the “worst” of the ice. Still, hope remained to catch a glimpse of the Arctic’s vast ice sheets.

Little did we know that those first icy nuggets were–quite literally–the tip of the iceberg. Early on the morning of September 9th, many of the sleeping scientists were awoken by a shaking ship and loud sounds of crashing and scraping. Could this be breaking ice?! We dashed outside in pajama pants or leaned out of our windows to capture the ship noisily crashing through sheets of broken up sea ice. Although it shook a little, the Araon handled the obstacles with ease, and our gleeful crew delighted in the sights a few more times throughout the icy day. Three weeks into our 4-week expedition it finally “felt” like we were in the Arctic.

The only thing left on our collective lists: seeing a polar bear. We all agreed this was a lofty, and somewhat unlikely, goal. To our surprise, however, later the same day we saw more sheets of sea ice, and an announcement after dinner alerted us to the presence of the very creature we had been awaiting! Many of us rushed to the bridge to try to catch a glimpse. In order to avoid bothering our Arctic friend, we stayed fairly far away, but close enough for everyone to see the bear with the help of binoculars and the ship’s zoom camera.

The last week of the expedition will involve a final set of AUV and ROV dives, one more pair of gravity cores, and of course, packing! We will have no problem entertaining ourselves on the long transit to Nome with a ping-pong table in the gym, a sauna, a weekly Korean barbecue, and a newly-learned traditional Korean team game called yut sticks.