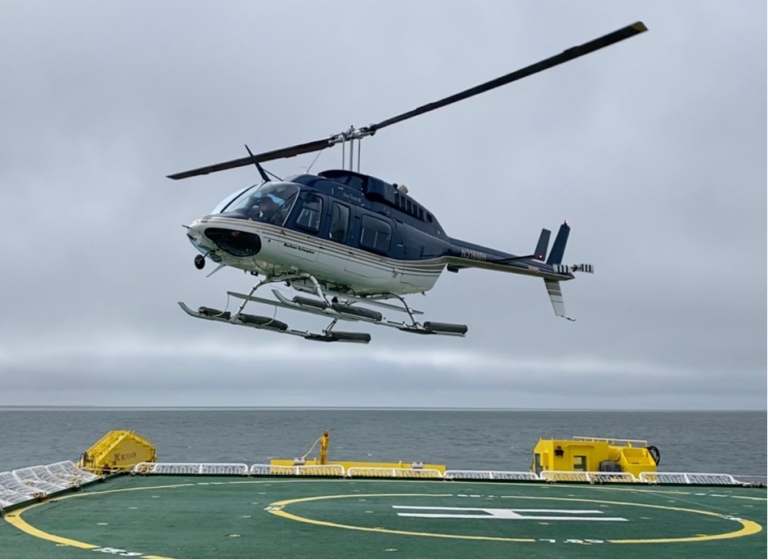 Updates from offshore of Utqiagvik, Alaska:

Greetings from the IBRV Araon! We are still stationary about two kilometers offshore of Utqiagvik, formerly Barrow, Alaska. It is a few minutes after local noon—our original departure time. We are waiting for the fog to lift so the helicopter can make its last flight to shore and leave us. Then we will pass through the sand bars further offshore and be on our way.

Since arriving rather uneventfully in Utqiagvik on Sunday, there have been several “mobilization stresses,” as Charlie put it. The first was whether we would all pass our COVID-19 tests before being transferred to the heliport on Monday. We did. The same was not true for two of the Korean scientists who had contracted COVID-19 recently enough that they were still testing positive though symptom-free. As a result, they were assigned to quarantine for 10 days in the ship’s infirmary.

Next was if and when the inertial navigation system (INS) units would arrive in Utqiagvik. They are essential gear for navigating our AUVs while underwater. The units were shipped separately as heavy freight and had been stuck in Anchorage for a week because all flights to Utqiagvik were full and couldn’t take extra cargo.

“Milk and mail get priority” was working against us. Miraculously, they were put on a plane Monday morning after we were told they had been bumped yet again.

The next challenge was whether it would be too windy on Monday for our helicopters to fly us out to the ship waiting offshore. Two “birds” from the Alaska-based company “Maritime Helicopters” had been contracted to accompany the Araon while it was in Dutch Harbor in the Aleutians because the ship couldn’t enter any of the harbors along this coast. They began the flights to transfer us out to the boat about five hours earlier than planned because, by noon, it was already blowing about 25 knots and predicted to increase. The ship recorded a high of 41 knots at some point during the day. Thankfully, we all made it out to the boat, and so did our luggage.

Next was provisioning for the ship—the fresh food shipment for this leg of the expedition never made it up from Anchorage for the same cargo limit reason as the INSs, so the crew had to shop at local markets in Utqiagvik. That and the requisite helicopter flights occurred Tuesday. Unfortunately, those extra helicopter operations prohibited any crane operations from happening, so our AUVs and other gear are still stowed in their containers amidst an array of other heavy equipment on deck.

The final departure dilemma occurred during the MiniROV and AUV teams’ efforts to mobilize when we discovered that the ship’s Sonardyne ultra-short-baseline (USBL) transponder head was not communicating to the topside electronics. The USBL transponder is lowered through a hole in the ship’s hull (a wellhead) and sticks down below to acoustically track—get the range and bearing—the AUVs and MiniROV when they are underwater. Without it, the ROV’s navigation accuracy is reduced to simply knowing it is hanging below the ship, so when the vessel gets a GPS signal, that is the best we can estimate the ROV’s location. The AUVs, however, can’t be located at all underwater without USBL tracking and aren’t operated without this capability because of the likelihood of losing the robots should anything go wrong. Charlie, Dave, and Randy were already brainstorming creative ways to conduct limited operations with the AUVs despite this crippling limitation.

Stressful meetings were held. Questions were asked, translated, and rephrased, and photos were exchanged. After the ship’s electrician and science technicians had spent many hours testing, it appeared that the problem was not with the long cabling from the bridge to the transducer well, which meant that the problem must be in the transducer head itself, which we initially understood could only be accessed by divers (impossible here). The MBARI team did bring a spare USBL head from the R/V Rachel Carson (we almost left it home due to its size and weight), and it turned out to be the same model as Araon’s. More communication revealed that the ship’s wellhead could be closed off and evacuated, so someone would be able to enter that compartment to replace the head. Things were starting to look hopeful. Then, we discovered that a connection was loose in a junction box part-way along the cabling to the head down in the well. And just like that, the USBL works!

It is now 1330, the helicopter pilot has waved goodbye, and we are underway!