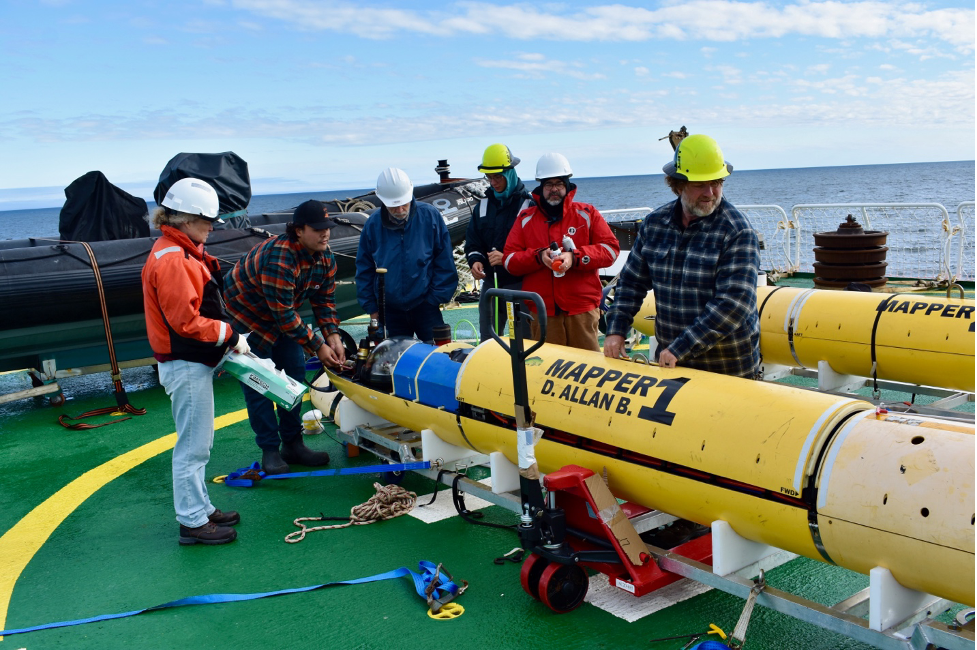 The AUV team assembles a Dorado AUV prior to deployment. Photo by Dave Caress

160 kilometers offshore in the Beaufort Sea:

Today was a big day for the MBARI Mapping Autonomous Underwater Vehicles (AUVs): we ran both of our vehicles with “spin-down” deployments in the Arctic Ocean!

Our team encountered operational challenges due to the special characteristics of this part of the Arctic Ocean. Large amounts of fresh water, from the melting of sea ice and input from the nearby MacKenzie River, float on top of and mix with the salty seawater to form less saline (brackish) and therefore less dense layers near the surface. The vehicles must descend through this large and fluctuating salinity gradient to the dense seawater at depth, which is similar in salinity to our home waters of Monterey Bay. This salinity gradient poses a unique challenge that was easily overcome for one of our vehicles but, before today, had prevented us from successfully operating the other.

Pictured above is a Dorado-class AUV, with a very important component highlighted: our radio modem’s antenna. This functions as our wireless connection to the AUV. During the deployment process we need to check in on the vehicle one last time once it’s in the water to send the scientific mission to the vehicle. Before putting the vehicle in the water, the AUV team completes a thorough checkout process to ensure every aspect of the vehicle is exactly as it should be: every bolt solidly secured, every sensor configured correctly, and all components communicating properly. But something can always go wrong while lifting the vehicle with the ship-mounted crane into the water, so the radio modem is crucial while conducting our final checks. If the antenna submerges underwater, we lose radio communications with the AUV, so the vehicle is carefully ballasted to float right at the ocean’s surface.

However, here we have to consider the salinity gradient I mentioned earlier. If the vehicle is ballasted for Monterey Bay waters, it would sink immediately on launch because of the fresher surface water here. If the surface layer is less dense, we can just remove weight to create a more buoyant vehicle, right?

Yes, but the nature of our mission— to map the seafloor in high resolution— means that we will have to dive through hundreds of meters of water to get to the bottom. Here in the Arctic Ocean, thanks to the salinity gradient, the salinity at depth is so much greater than at the surface that our vehicle becomes 15 to 20+ pounds more buoyant, simply because the density of the seawater has increased. If it is too buoyant at this depth, the vehicle will be unable to keep itself from floating up and away from the seafloor, making it impossible for us to collect data, and resulting in a failed mission. So, we need it to both float at the surface and be as close to neutral as possible at the bottom, which is harder than it sounds.

We use an articulated propellor, AKA “tailcone” (highlighted above) located at the tail-end of the AUV to control our depth, pitch, and heading. During the mission it works to keep the vehicle flying level while it surveys the seafloor. Because of this we not only need good overall buoyancy, but good trim is also key. Trim is the horizontal distribution of the weight in the vehicle. If the weight in the vehicle is too lopsided to the front or the back, one end will constantly float up faster than the other, forcing the tailcone to work harder than necessary or even fail to keep the AUV in control.

We learned how precise our ballasting needs to be the hard way with one of our vehicles. During the first few missions we discovered that a slight imbalance in trim results in an inability to maintain control during the survey—a problem which only becomes apparent multiple hours into the mission once the vehicle is at depth. The nose of the AUV was only a pound heavier than the tail, but due to our buoyancy issues with salinity, the vehicle dove too steeply while trying to maintain altitude, resulting in a need to abort the mission before the vehicle crashed into the bottom. With only one real opportunity to deploy and recover both vehicles in a given day, a lot of effort goes into making each attempt our best. Once the ballast and trim were carefully dialed-in, and a few errant code bugs squashed, we deployed today with high hopes that everything would now work as intended.

After sending the vehicle on its way, we quickly gathered in the control van to track its progress with the use of an acoustic beacon mounted inside the AUV. The beacon talks to an acoustic transducer mounted on the Araon, and from this communication we can tell where the AUV is located with a fair bit of accuracy, including its current altitude above the seafloor. This stage is crucial, as any problems requiring a cancelled mission will likely appear here. You’ll find the team closely watching the metrics coming back from the vehicle, writing down values and noting any trends as soon as they appear onscreen. In this case, everyone was anxiously watching the depth and altitude readings.

The team watched the vehicle slowly spiral down to its programmed starting point above the seafloor, and after a brief pause, begin to make its way along the first line of our survey. Was the vehicle flying level along the seafloor? Adjustments in the ship’s location are required to maintain our acoustic tracking of the AUV. As the ship moved into a better position, we lost our connection with the AUV because the ship’s powerful engines scramble any acoustic signals coming from the vehicle, forcing us to tensely wait until a steady position is regained.

To our relief, tracking slowly came back, and the moment of truth quickly approached. A minute passed, as did another, with the altitude reading gently oscillating around our desired altitude of 50 meters above the seafloor. Good so far, but anyone who has worked with AUVs has been burned by being too quick to assume a successful deployment. Eventually we were able to see the first line of our survey was completed at a level altitude, followed by a 180 degree turn before the next line was underway. Satisfied, the AUV team breathed a sigh of relief. A radio call was made to the ship’s bridge to inform them that the deployment was complete. We pulled away from the deployment site, and left the vehicle to run its 18-hour survey while we continue scientific work at another location in the Arctic. This AUV will join its counterpart mapping newly-discovered features in the seafloor, and doubling our map-making ability. 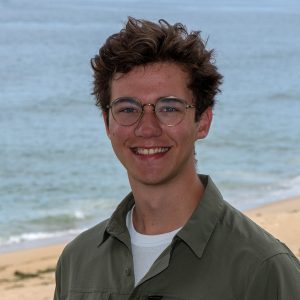