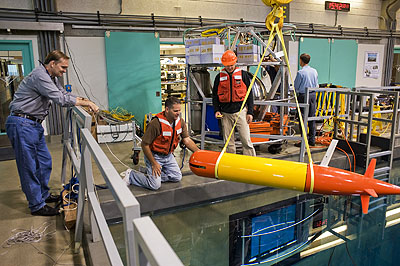 Over the past decade, the undersea robots known as autonomous underwater vehicles (AUVs) have become increasingly important in oceanographic research. Today’s AUVs fall into two groups: 1) propeller-driven vehicles that can travel fast and carry lots of instruments, but are limited to expeditions of only a few days; and 2) “gliders,” which can stay at sea for weeks or even months at a time, but cannot travel very quickly. MBARI engineers recently demonstrated a new super-efficient AUV that combines the best of these two approaches. This new long-range AUV (LRAUV) can travel rapidly for hundreds of kilometers, “hover” in the water for weeks at a time, and carry a wide variety of instruments.

The new robot, called Tethys, spent most of October crisscrossing Monterey Bay as part of MBARI’s CANON experiment. Oceanographers used Tethys to track patches of microscopic algae that were carried around the bay by currents. During this experiment, the robot showed that it could travel fast enough to buck the currents, but could also go into “hover mode” to drift with the currents when needed.

In “high-speed mode” the LRAUV can travel up to one meter per second (2.25 miles an hour) – about four times faster than most underwater gliders. However, it can also travel long distances at around half this speed.

After spending four years designing, building, and testing Tethys, MBARI engineers were happy to see it working out in the real ocean. In fact, the AUV performed even better than expected. The AUV completed a four-day science run with plenty of battery power remaining, using relatively low-power rechargeable batteries. Based on these promising initial results, the researchers hope that the little robot will eventually be able to travel from California to Hawaii using high-power disposable batteries. 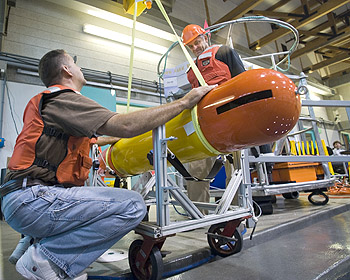 Tethys is the brainchild of MBARI’s Chief Technologist, Jim Bellingham, who has been designing cutting-edge AUVs for almost 20 years. Bellingham says, “In designing this AUV, we were actually trying to make a fundamental change in how we do oceanography. In the past, if we wanted to study something like an algal bloom, we could either put out a mooring and hope that the bloom would drift past it, or we could schedule a research cruise and hope that the bloom would happen while we were out on the ship. Tethys can travel to a spot in the ocean and ‘park’ there until something interesting happens. Once a bloom occurs, Tethys can move fast enough to follow the bloom and watch it evolve, the way a biologist on land might follow and study a herd of deer.”

From the very beginning, Tethys was designed to be as energy efficient as possible. Its hull, motor, and propeller were computer designed and tested to minimize drag and maximize efficiency of propulsion. Like a fish, it can control its buoyancy and the angle at which it “swims” through the water. The robot also incorporates sophisticated power-saving software like that found in some laptop computers, which monitors what systems are being used, and turns off those systems that are not in use.

This quest for energy efficiency is not without its risks. For example, most robotic vehicles are slightly buoyant. This means that, if all else fails, they will float up to the surface. However, with its variable buoyancy system, Tethys can make itself neutrally buoyant. If the entire system went dead under these conditions, the robot would remain drifting somewhere below the surface, and could be very difficult to recover. To mitigate these risks, MBARI engineers designed numerous fail-safe systems into the robot, some of which have their own independent power supplies.

Most AUVs are programmed at the surface to follow a pre-set path through the water. Some can be reprogrammed via a satellite link when they come to the surface. Tethys takes this process further, and can make some decisions without human intervention. For example, during the CANON experiment, it was programmed to follow a course that would allow it to map the vertical and horizontal extent of algal blooms beneath the ocean surface. 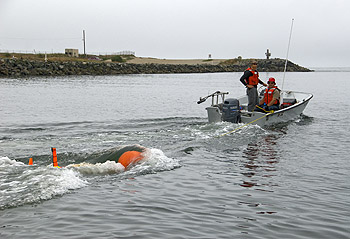 This photo shows the long-range AUV being towed out of the Moss Landing Harbor for a test run. One advantage of this relatively small vehicle is that it can be launched using a small boat instead of requiring a large vessel and a specialized crane. Note: The orange ball is a float that keeps the AUV’s nose from sinking when the vehicle is being towed. Photo: Todd Walsh © 2010 MBARI

Such internal decision making becomes increasingly important when robots operate for weeks or months at a time. As Bellingham put it, “We found that controlling the vehicle from shore via satellite was just too cumbersome. By the time the vehicle had seen a promising patch, reported it to us, and we had sent the vehicle back toward the center of the patch, the patch had moved. Also, controlling the robot 24/7 was very tiring for the human operators. We suspected, and now we know, that the long-term success of such research depends on the vehicle being able to carry all this out on its own.”

As with the energy efficiency software, having such sophisticated internal control software carries certain risks. As Bellingham put it, “You cannot predict exactly how the AUV will behave—that’s the whole point. But you still want to make sure that whatever it decides to do, nothing bad is going to happen to the vehicle.”

Bellingham hopes that this new AUV design will be small and inexpensive enough so that it can be used for a variety of ocean research and monitoring. “We did some research and found that the most used research vehicles were the smallest ones. But it’s a real challenge to balance the factors of complexity, weight, and cost. Ultimately we’d like the Tethys to be a vehicle that is broadly accessible to scientists—a vehicle that can be launched from a small boat, at relatively low cost.”

Even as Tethys was being put through its paces in October, MBARI engineers were busy building a second LRAUV. As Bellingham points out, “These vehicles are designed to run as part of a pack.” For example, when tracking patches of algae, one LRAUV could be “parked” in the middle of the patch, to drift with the currents. A second LRAUV would circle around the outside of the patch to measure how the shape and size of the patch changed over time. 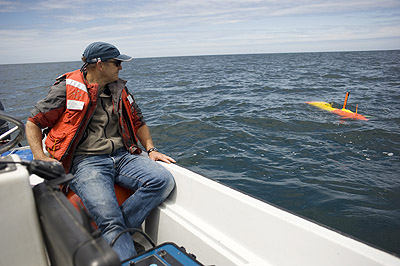 Bellingham also hopes to use two LRAUVs with different instruments in a single experiment, so that they can monitor different types of marine organisms simultaneously. He explains, “Although our first vehicle is equipped to study phytoplankton blooms, we want to equip subsequent vehicles to characterize other organisms, such as zooplankton [drifting marine animals]. We are working on the bottom of the food web now, but eventually we hope to observe interactions between organisms at different trophic levels. For example, we could study zooplankton grazing on phytoplankton, or fish and marine mammals feeding on krill. Of course, this is going to be a long-term effort.”

Tethys has completed its first field experiment with flying colors. But given the team’s ambitious goals, it’s clear that this little robot still has a long way to go.