MBARI biologists on the trail of “brain-eating amoebae” 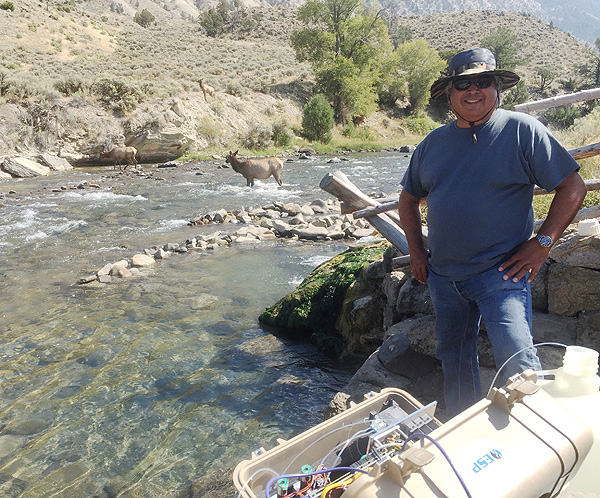 MBARI researchers are used to braving gusty winds and choppy seas as they test their high-tech equipment in Monterey Bay. But a recent field experiment in Yellowstone National Park saw MBARI researchers Kevan Yamahara and Roman Marin III dodging hordes of tourists and herds of elk while searching for “brain-eating amoebae.”

This might sound like the plotline for a bad B-movie, but for Yamahara and Marin it was just another chance to test out the water-sampling capabilities of MBARI’s Environmental Sample Processor (ESP). For over 10 years, ESPs have been used to automatically collect and process water samples from New Zealand to Monterey Bay to Lake Erie to the Gulf of Maine.

The Yellowstone experiment is a part of a joint effort with the U.S. Geological Survey (USGS) and Montana State University to study a tiny amoeba, Naegleria fowleri. This amoeba is found in warm to hot bodies of freshwater around the world, and is relatively common in the U.S. South. It also shows up occasionally in hot springs, water heaters, and neti pots. 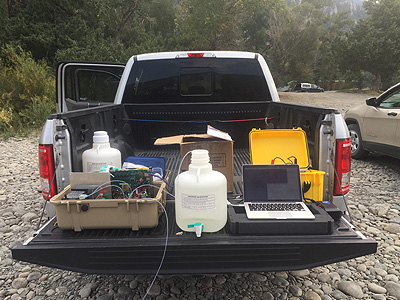 MBARI’s third-generation Environmental Sample Processor is small enough to fit in a fishing tackle box. The entire monitoring setup is shown here in the back of a pickup truck near one of the team’s field sites in Montana. Image: Kevan Yamahara © 2017 MBARI

If you get water harboring Naegleria fowleri in your nose, there is a chance that the amoebae will migrate up your sinus nerve and into your brain, where they begin consuming nerve cells. The first symptoms, including headache, nausea, vomiting, and a stiff neck, appear in about five days. In another five days you are likely to be dead (the fatality rate is 97 percent).

Fortunately, even though Naegleria amoebae are common, brain infections are rare. According to the U.S. Centers for Disease Control and Prevention (CDC), only 40 people in the United States were infected with Naegleria fowleri between 2007 and 2016.

According to the CDC, “There are no rapid, standardized testing methods to detect and quantitate Naegleria fowleri in water… It can take weeks to identify the amoeba, but new detection tests are under development.” The USGS is collaborating in the development process, which dovetails with a larger USGS effort to place automated water-monitoring systems on stream gauges around the country.

That’s where the ESP could eventually come in handy, not only in monitoring disease-causing organisms such as Naegleria, but also in collecting environmental DNA that could be used to detect the presence of zebra mussels and other invasive species. (Environmental DNA is genetic material that is released by organisms into their surroundings through normal biological processes such as urination or sluffed skin.)

In the recent field experiment, MBARI researchers used two different types of ESPs to process water samples from the Gardner River, close to the Montana/Wyoming border. A small, portable, third-generation ESP was carried out into the field to filter and process samples taken directly from the river. An older, second-generation ESP was installed at Montana State University and used to process water samples that the researchers brought back from the river in carboys. 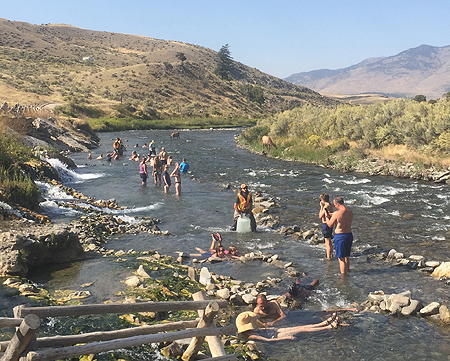 After the ESPs processed and filtered the water samples, researchers removed filters from the ESPs and shipped them to USGS and CDC labs for further processing and testing for Naegleria.

Though Marin and Yamahara enjoyed the Yellowstone scenery, it was hard work hiking to and from the river carrying batteries and heavy equipment, not to mention 60 liters of water. In addition, the stretch of river where the team collected the water samples turned out to be quite a busy place. While collecting water samples, the team had to work around travelers who flock to the river to soak its warm waters, apparently unconcerned about the (probably minor) risk of having their brains infected by amoebae. More inspiring was a herd of elk that wandered in and out of the sampling area, oblivious to both the researchers and the tourists.

This pilot project, funded by a USGS Innovation Center grant, is just the first in a series of tests to determine if the ESP can be used by the USGS to monitor waters across the United States. Like a migrating salmon, the ESP has begun making its way out of the ocean and into freshwater streams and lakes far inland. If it can help prevent infections by brain-eating amoeba, so much the better!