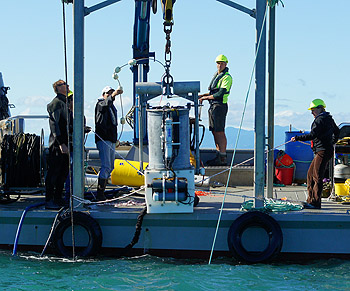 With its ability to detect ocean events ranging from sewage spills to harmful algal blooms, MBARI’s Environmental Sample Processor (ESP) has immense potential for monitoring ocean water quality. Until recently, however, only a limited number of these instruments have been available. With the recent commercialization of this device, ESPs are now being tested for day-to-day ocean monitoring at several sites around the world. During May 2012, two new ESPs were installed in Tasman Bay, New Zealand, and in the Gulf of Maine.

Each environmental sample processor is a miniaturized robotic laboratory, which automatically takes in samples of seawater and detects microscopic organisms in the water by analyzing their DNA and other genetic material. The ESP then sends this information back to shore in real time. Under development at MBARI since the 1990s, the ESP has recently been commercialized and marketed by Spyglass Biosecurity.

The ESP in Tasman Bay, New Zealand, was deployed for a monthlong test sponsored by the Cawthron Institute, a private nonprofit research institution based in Nelson, New Zealand. By providing real-time information on harmful algal blooms, human fecal bacteria, and drifting microscopic animals, the ESP in Tasman Bay will provide vital information for local salmon and shellfish aquaculture facilities, as well as water-quality agencies. During this test deployment, the Cawthron Institute is also collecting water samples by hand and running them through a second ESP located in a lab on shore, so that they can compare the results from the two instruments.

MBARI researchers previously worked with the Cawthron Institute in 2011 to provide expertise and controller software for a long-term ocean monitoring buoy in Tasman Bay. The recent ESP deployment continues this fruitful collaboration. If all goes well during the test deployment, ESPs may be used for ocean monitoring at several locations around New Zealand.

The ESP recently deployed in the Gulf of Maine was built for the U.S. Environmental Protection Agency (EPA). It is being deployed by Don Anderson at the Woods Hole Oceanographic Institution as part of an experiment to detect red tides, some of which can infect shellfish and sicken humans.

The ESP in the Gulf of Maine is located on a mooring about 10 kilometers (6 miles) from shore. The instrument itself is suspended 20 meters (65 feet) below the ocean surface, where there is relatively little wave motion. A long, flexible hose collects water samples near the surface, where the algae are most likely to be found. One of the algae that Anderson and his colleagues are most interested in is a type of dinoflagellate called Alexandrium fundyense, which can cause paralytic shellfish poisoning.

In both New Zealand and in the Gulf of Maine, the ESP may eventually supplement or even replace replace traditional laboratory methods for detecting harmful micro-organisms. Currently, such techniques can take days or even weeks to deliver results. As Cawthron scientist Chris Cornelisen put it, “This could completely change the face of monitoring by providing nearly immediate information on water quality, biosecurity threats, and potential toxic blooms.”