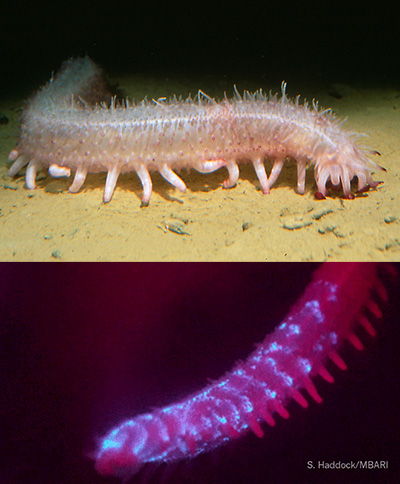 Nearly all sea cucumbers in the deep sea make their own light. This one, Pannychia-moseleyi, creates pulsing bands of blue light that move across its body. Upper image: Dave Wrobel © 1995 MBARI; lower image: Steve Haddock © MBARI.

In the dark depths of the ocean, pretty much the only sources of light are the animals that live there. Whether flashing, glimmering, or emitting glowing liquids, many deep-sea animals are able to produce light (bioluminesce). MBARI researchers recently found that animals that live on the seafloor are much less likely to produce light than those swimming or drifting in the “midwater”.

In 2017, MBARI researchers Severine Martini and Steve Haddock showed that about three quarters of midwater animals in the deep sea make their own light. Martini, Haddock, and several collaborators recently applied the same analytical methods to study bioluminescence in animals living on or near the deep seafloor. In a new paper in Scientific Reports, they estimate that only about 40% of deep seafloor animals make their own light.

One challenge in studying bioluminescence is that most marine animals don’t glow continuously, but only when they are disturbed. Another challenge is that only the most advanced cameras and specialized instruments are able to detect the dim glow emitted by many deep-sea animals. Researchers have tried bringing deep-sea animals to the surface to study them, but many are fragile and once they arrive at the surface they are unlikely to behave naturally.

To get around these obstacles, Martini and Haddock worked with Marine Biologist Linda Kuhnz to query MBARI’s huge 30-year database of video observations (VARS) to identify the different groups of animals that were observed in midwater and seafloor habitats. Then, based on field observations and data from the scientific literature, the researchers assessed which species within each of these groups were known to be bioluminescent, which were possibly bioluminescent, which were definitely not bioluminescent, and which could not be assessed because there was no data.

“MBARI’s video annotations are such a rich source of information about the deep sea,” said Haddock. “This is just one of the many stories hidden in the database. Séverine’s work has yielded a number of insights about the capabilities of these little-known creatures.”

Martini’s recent analysis of the database revealed some interesting patterns. For example, within a few groups of seafloor animals, such as sea cucumbers, brittle stars, sea pens, and bamboo corals, nearly all those species that have been tested were able to make light. On the other hand, no sponges, sea urchins, or sand dollars are known to bioluminesce. However, these groups all include species that have never been tested, which means scientists would not know if they were bioluminescent or not. 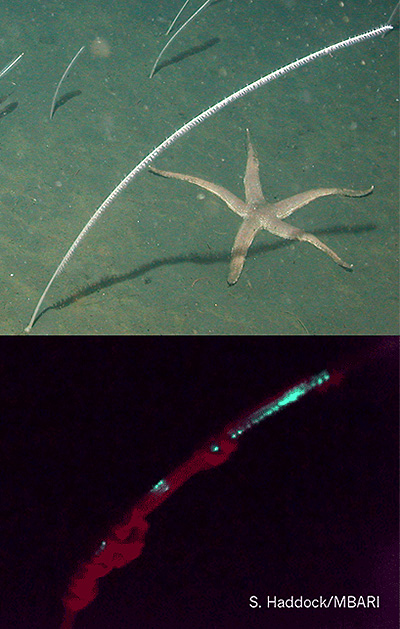 For some animals, such as a deep-sea anglerfish with a glowing lure, it’s obvious how bioluminescence helps the animal survive. However, scientists aren’t sure why many deep-sea animals expend the extra energy needed to make their own light. In the broadest sense, these animals are communicating with one another, and this communication may help them find or attract prey, escape predators, find mates, or serve other purposes that remain unknown.

But why would this communication strategy be less useful on the seafloor than in the midwater? The authors of the recent article point out that the midwater is essentially a borderless, three-dimensional habitat, with water that is often relatively clear. In contrast, the deep seafloor is mostly a two-dimensional habitat, punctuated by rocks that can block animals’ views of one another, as well as water that is more likely to be murky. Both of these factors may explain why bioluminescence could be less useful for seafloor animals, especially for communicating over distances of more than a meter or two.

On the other hand, some seafloor animals may not need their glow to be seen at a distance. For example, both sea cucumbers and sea pens apparently use brilliant, flashing patterns to startle predators. Such a defense may only be needed when the animal is being attacked or disturbed by a predator that is close at hand.

Another possible reason that relatively few deep-seafloor animals glow is that they may be disturbed repeatedly by bits of debris or animals drifting by on the currents, which don’t pose a threat. Like a motion-detector light that goes on every time a cat walks by, such bioluminescence could be a waste of energy for an animal on the seafloor.

Considering the challenges faced by glowing creatures on the seafloor, Martini and Haddock note that human activities in the deep sea, such as oil and gas development or deep-sea mining, often create zones of turbid water that could limit the usefulness of bioluminescence. In these cases, human activities could make it more difficult for deep-sea animals to “communicate” with one another.

Reflecting on the research, Martini said, “I’m very happy that, using MBARI’s remotely operated vehicles and the VARS database, we were able to answer, in a quantitative way, several long-standing questions in marine biology. Although bioluminescence is an amazing trait, we still have a lot to learn about its importance in marine ecosystems.”

July 13, 2020 – A new research paper shows that some of the most common and iconic deep-sea corals can create their own light.
March 23, 2020 – Humboldt squid communicate with each other using changing patterns of light and dark pigment in their skin.
October 17, 2019 – MBARI researchers recently found that animals living on the deep seafloor are much less likely to produce light than those swimming or drifting in the “midwater.”
March 6, 2019 – Scientists at MBARI recently found a way to identify several groups of glowing marine organisms by the light they produce.