This photo shows the robotic arm on MBARI’s remotely operated vehicle (ROV) Ventana lowering the DEIMOS instrument onto the seafloor. The blue cylinder works like a fish finder, sending sound waves up from the seafloor to detect fish and other animals swimming above. Image: (c) 2009 MBARI

Biological surveys of aquatic organisms from a ship typically last a few weeks or a month, but what happens to populations of fish and invertebrates after the research survey is over? Distributions of predators and prey change continuously and over time scales that are impossible for researchers to monitor using ships.

To examine the movements of marine animals over longer time scales, scientists from the University of Washington worked with MBARI to attach the Deep Echo-Integrating Marine Observatory System (DEIMOS) to the MARS observatory. This acoustic system works like a “fish finder” used on many recreational boats, but points upward from the seafloor instead of pointing down from the surface.

The DEIMOS system can monitor the entire water column in real time. Data from DEIMOS is helping researchers understand how animals in the open ocean respond to tides, cycles of light and darkness (see data plot at lower left), upwelling, storms, and even long-term processes such as El Niño events.

How does it work?

Like other sonar systems, DEIMOS sends brief pulses of sound into the water and records the sound energy that is reflected back from objects whose densities are different from the surrounding seawater. Such objects can include many marine animals, from 2-centimeter-long krill to 20-meter-long blue whales. Needless to say, DEIMOS has been designed so that its sounds do not disturb marine mammals or other sea life.

The heart of the DEIMOS system is a Simrad Fisheries EK-60 echosounder, manufactured by Kongsberg Underwater Technology. To allow this echosounder to work in the deep ocean, the researchers added an oil-filled transducer that can withstand the effects of water pressure down to depths of 1500 m. The researchers also integrated the echosounder with off-the-shelf electronic components, to create a system that collects and transmits acoustic data and communicates with shore-based computers in real time. The whole data system had to be kept small and light (under 136 kilograms) so that it could fit in a 17 inch (~43 cm) diameter glass sphere and be deployed by MBARI’s Remotely Operated Vehicle Ventana. 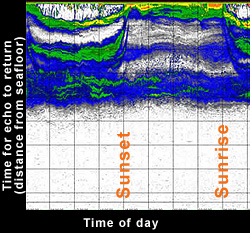 Image: Fisheries Acoustics Laboratory at the University of Washington

This plot shows data returned from DEIMOS over about a 24-hour period. Yellow and orange areas indicate strong echoes returning from animals in the water column; white areas indicate few animals and little or no reflected sound. The vertical axis shows the time required for sound to echo back to the instrument, which is proportional to distance above the seafloor. The upward-curving green and yellow lines indicate that large numbers of deep-sea animals are migrating up toward the surface at sunset and returning to the depths around sunrise.

A cabled observatory enables real-time, long term monitoring of animal densities and movements in the water column. During typical acoustic marine-animal assessment surveys, ships follow pre-defined transect lines that are evenly spaced to cover large geographic areas. However, the entire survey area is not mapped continuously. At typical ship speeds, it is not always possible to make synoptic measurements of mobile organisms such as fish. By hooking DEIMOS up to the MARS observatory, we can make continuous measurements over long time periods, detect episodic events, and examine the data in real time.

John Horne at the University of Washington—developer of the DEIMOS system. 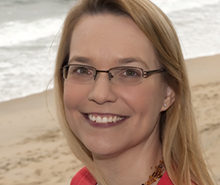 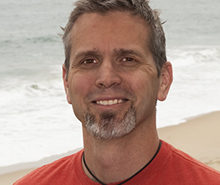