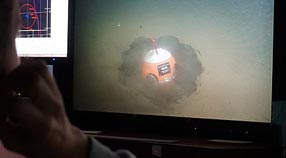 Submarine canyons are notoriously difficult to study. Underwater avalanches of water and sediment periodically surge down the bottoms of many canyons, often burying or destroying any scientific instruments in their path. After more than a decade of placing (and sometimes losing) equipment in Monterey Canyon, MBARI researchers have created a unique new tool to study canyon processes. These new instruments provide useful data for researchers even after being tumbled, pummeled, and buried under meters of sand.

Between 2000 and 2008, MBARI geologist Charlie Paull and his fellow researchers placed at least 11 different instrument packages, some weighing as much as 1,360 kilograms (1.5 tons), in the upper part of Monterey Canyon. Many of these were lost or damaged within a year of being deployed. However, they did record evidence of about 10 distinct sediment-movement events, ranging from mild currents to instrument-busting avalanches traveling up to five meters per second (11 miles an hour). They also showed, surprisingly, that sediment moves down the canyon even during the calmer spring and summer months.

Paull was puzzled by the fact that many instruments remained more or less upright, even after being moved kilometers down the canyon. This conflicted with the textbook view of turbidity currents as chaotic, turbulent flows. As Paull put it, “We had a hard time figuring out whether the flow was moving over the canyon bottom, or whether the entire bottom itself was moving as a series of slump blocks.”

By 2010, Paull decided he needed a new type of instrument package. First, it had to be durable enough to survive being tumbled, battered, and buried. Second, it would need to record whether it was rotating or sliding as it moved down the canyon. A team of MBARI engineers, led by Brian Kieft, spent several years working on this device. Although they are officially called benthic event detectors (BEDs), Kieft whimsically refers to them as “smart boulders.”

Paull said, “I’m really excited about this new work—Brian took the ball and ran with it.” In fact, BEDs (at least in their current configuration) do look a little like beach balls. They consist of a spherical shell of pressure-resistant foam surrounding a waterproof pressure housing made of titanium and carbon fiber. Inside the housing is a very precise clock, temperature and pressure (depth) sensors, and accelerometers that record whether the package is rolling, bouncing, and/or sliding along the canyon floor.

Like a car alarm, a BED is designed to remain in “sleep mode” until triggered by some kind of strong motion, which typically indicates the beginning of a sediment event. Once triggered, the instrument “wakes-up” and collects data until it stops moving. Researchers can analyze these data to determine exactly when, how far, and how fast the BED moved during an event, as well as whether it has been sliding or rotating.

However, as Kieft pointed out, “Collecting the sensor data is only half the problem. We also have to find the instrument and get the data from it.” To address this problem, each BED contains an acoustic modem, which uses sound waves to transmit data through seawater and seafloor sediment. This allows researchers in a boat at the sea surface to communicate with a BED buried in the seafloor. Paull explained, “The really cool thing is that we don’t depend on getting these things back. We can lose our instruments, but still get our data.”

Since the spring of 2013, the engineering team has deployed three BEDs in the upper part of Monterey Canyon. These were carried up to nine kilometers (5.5 miles) down the canyon during events that lasted up to an hour each, and moved by both rolling and sliding. Since then, MBARI software engineer Mike McCann has created animations showing the rotational motions of the BEDs within Monterey Canyon.

But this was just a warm up for the main event–using the BEDs in the 2015 Coordinated Canyon Experiment. During this experiment Paull is teaming up with an international group of researchers to place as many instruments as possible in the canyon. By combining the data from all these instruments (including four BEDs), the researchers hope to get a much more complete picture of the processes occurring throughout the length of the canyon.

The researchers hope that their benthic event detectors will provide new details about sediment movement that will help verify and refine Paull’s theories. The BEDs program is one more example of how scientists and engineers, working together, can conduct cutting-edge research even in the hostile environment of an active submarine canyon.