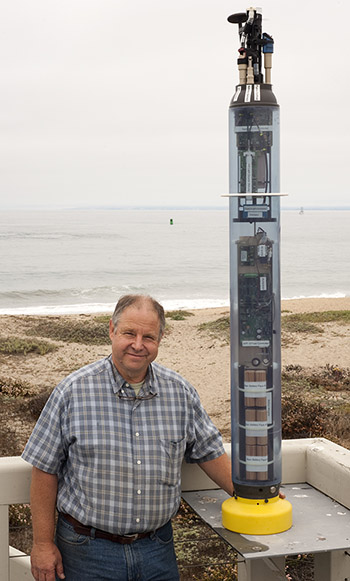 Peering into the insides of a machine can be a useful way to learn about how it works. MBARI researchers Ken Johnson and Hans Jannasch created a transparent, nonfunctional version of a profiling float, an instrument that makes biogeochemical measurements in the ocean, for educational purposes. To make the clear float, Jannasch collected old, discarded parts at MBARI and from partners at the University of Washington, and replaced the yellow outer casing of the float with a transparent PVC tube.

The inner parts are labeled and there are two cutaway elements—one to see the flow-cell, a device that allows seawater to be pumped over the sensors and shields the pH sensor from light, and another to see the bladder that inflates and deflates to allow the float to sink to the bottom and rise through the upper 2,000 meters of the open ocean, collecting measurements along the way. Jannasch, hailing from Germany, painted the cutaways red, a technique he remembers from his childhood when he saw an exhibit of a train that was cut in half in the Deutsches Museum in Munich.

After the float was built, it was sent to the Hamptons, New York, where Peter DeMenocal from the Lamont-Doherty Earth Observatory displayed it at a fundraiser to build an array of biogeochemistry floats. It is planned that this array will be used in research on how carbon dioxide cycles through the ocean. The float went on to an MBARI teacher workshop at Rutgers University, New Jersey, for a discussion about the Southern Ocean Carbon and Climate Observations and Modeling program, a six-year program that consists of deploying an army of profiling floats in the Southern Ocean. This discussion was led by Robert Key, a research oceanographer at Princeton University, and George Matsumoto from MBARI for the 2016 Education and Research: Testing Hypotheses workshop. The clear float is currently on its way back to the west coast where Peter DeMenocal will display it at another high-profile fundraising event. The float will also be displayed at the upcoming Oceans Conference in Monterey, California, held by the Institute of Electrical and Electronics Engineers, as well as at MBARI’s annual Open House, open to the public, on October 15, 2016. 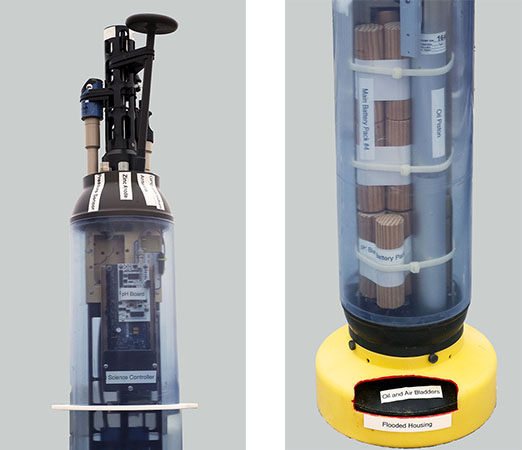 The clear profiling float is one busy and popular device. Following the MBARI Open House, its next trip will take it to Marrakesh, Morocco, for the United Nations Climate Change Conference. Hans Jannasch said the shipping container is being upgraded to include hinges and handles. While MBARI researchers are dedicated to creating new technology for scientists to use, they are also committed to sharing their know-how with others. The clear profiling float has already proven to be a helpful teaching tool, and it promises to educate others in the near future.