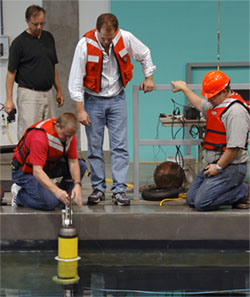 (from left to right) Ken Johnson, Dana Swift, Luke Coletti, and Hans Jannasch test a profiling float similar to the floats that will be used for SOCCOM in MBARI’s test tank. Image: © 2014 MBARI.

Ocean researchers are on the verge of gaining new insights about the changing Southern Ocean with help from sensors developed by a research team at the Monterey Bay Aquarium Research Institute (MBARI). These sensors will be implemented in the Southern Ocean Carbon and Climate Observations and Modeling (SOCCOM) program, which just received a $21 million grant from the U.S. National Science Foundation. The six-year SOCCOM program, a collaboration between 11 institutions including MBARI, began this month and aims to enhance the scientific and public understanding of the Southern Ocean’s role in climate change and biogeochemistry.

MBARI Senior Scientist Kenneth Johnson and his team developed the chemical sensors that will be used in the project. His group developed some of the first reliable sensors that can measure nitrate and pH in the ocean. As part of the SOCCOM project, these sensors will be integrated onto freely drifting profiling floats that can operate on their own for about five years, taking measurements throughout a broad swath of the upper ocean.

The battery-powered profiling floats operate automatically, spending most of their time at depths of 1,000 to 2,000 meters below the surface. Every five to 10 days they rise toward the surface, collecting chemical measurements as they go. When a float reaches the surface, it determines its position using GPS and sends its data to a shore-based server via satellite.

This illustration shows a profiling float rising through 2,000 meters and sending data after it ascends. Image: Kelly Lance © 2013 MBARI.

Johnson previously contributed to the Argo network, a global array of over 3,000 autonomous profiling floats that measure temperature and salinity in the upper ocean. In 2007, Johnson first added nitrate sensors to Argo floats near Hawaii. Now, Johnson says, his instruments are on floats “everywhere from the Greenland Sea, North Atlantic, to the Indian Ocean, Bay of Bengal, Arabian Sea, and South Pacific.”

Ocean scientists still know very little about the annual variability of the Southern Ocean’s fundamental chemical properties, which give researchers insights into biological processes such as algal growth and photosynthesis. SOCCOM researchers are interested in observing the cycling of carbon, nitrogen, and oxygen in the Southern Ocean. “We’re essentially measuring the metabolism of the ocean,” Johnson said.

The data collected from the profiling floats will also improve scientific understanding of the ocean and enhance projections of Earth’s climate and biogeochemistry. As part of the SOCCOM program, a modeling team headed by Joellen Russell, a professor at the University of Arizona, will use data from the profiling floats to analyze and improve high-resolution earth-system models. These modeling studies will help researchers better understand the inner workings of the Southern Ocean and how it impacts Earth’s climate and biosphere.

There are currently 3,628 profiling floats in the Argo network. Scattered across the world’s oceans, the floats continuously measure the temperature and salinity of the upper ocean. Image: © 2014 Argo.

The rapid changes in the Southern Ocean are likely to have significant impacts on its inhabitants. Increasing concentrations of carbon dioxide are causing pH levels to drop, creating a more acidic ocean. Scientists predict that due to ocean acidification, by 2030 a large portion of the Southern Ocean could become under-saturated in aragonite, the building material of mollusc shells. This could largely impact populations of snails and clams, and on a larger scale, Antarctic ecosystems. Climate models, with data from the profiling floats, will give insight to how marine ecosystems will respond to a warmer ocean.

Data from the SOCCOM profiling floats will be made available online within four hours of transmission from each float. “Because we are building a global sensor network, we wanted to make the data publicly available,” said Johnson. SOCCOM’s goal of understanding ocean change aligns with MBARI’s mission to develop tools locally that can be applied globally.