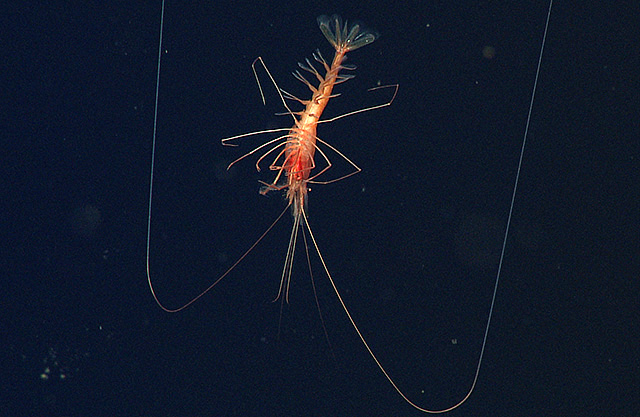 Close up image of a “zombie shrimp” (Hymenopenaeus doris) drifting motionless in the Gulf of California. While “playing dead” the shrimp makes small adjustments to its appendages so that it remains in a vertical position. Image: © 2015 MBARI

While exploring the depths of the Gulf of California with a robotic submarine, MBARI researchers saw an eerie sight: a small shrimp hanging upside down, spread-eagled in the water, and not moving. The shrimp looked dead, but when the sub approached, the shrimp “woke up,” and moved its antennae and legs slightly. Though barely visible, these movements were just enough to keep the shrimp oriented head down as it sank slowly into the depths.

Later on in the same dive they saw another shrimp doing the same thing. Then another. And another. Ben Burford, a former student intern at MBARI (and now a PhD student at Stanford University), was fascinated by these “zombie shrimp.” In fact, he was so excited that he wrote and published a research article about their behavior in the scientific journal PLOS One.

Most shrimp shed their hard exterior skeletons periodically, and the unmoving zombie shrimp looked a lot like a discarded exoskeleton sinking slowly through the dark waters of the Gulf. Burford and his fellow researchers speculate that, by pretending to be empty skeletons, the shrimp might reduce their chances of being eaten by predators. 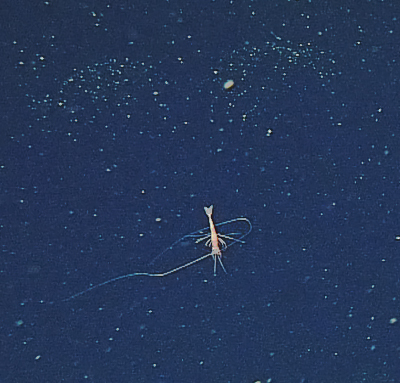 A zombie shrimp drifts below a mucus web (the two clusters of white dots at the top of the image). A few zombie shrimp were observed near mucus webs, but researchers don’t know if the shrimp actually make or use the webs. Image: © 2012 MBARI

The shrimp might also be saving their energy, since they live at a depth where seawater contains very little oxygen. In waters without much oxygen, many animals have a hard time moving rapidly or for long periods of time.

The researchers also noted three “zombie shrimp” drifting right underneath large mucus webs. Many deep-sea animals use mucus webs to collect marine snow (small particles of debris drifting down from the surface) for food. At this point, the biologists don’t know if the zombie shrimp created the mucus webs or were just hanging out near them.

After seeing lots of shrimp behaving like zombies in the Gulf of California, the researchers looked through MBARI’s video archive and discovered that some deep-sea shrimp in Monterey Bay do something very similar.

So if you’re thinking about a creative Halloween costume for next year, you might consider going as a zombie shrimp. But don’t forget the mucus web… 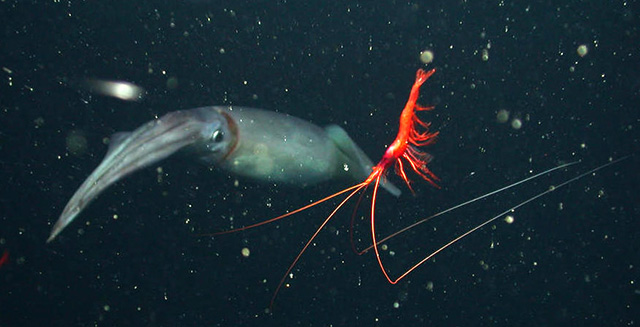 A small shrimp (Petalidium suspiriosum) swims in Monterey Bay while a Humboldt squid lurks in the background. These shrimp behave similarly to the “zombie” shrimp. Image: © 2015 MBARI

Video about the zombie shrimp:

July 8, 2020 – A new study argues that deep-sea mining poses significant risks not only to seafloor ecosystems, but also to animals in the vast midwater realm.
March 17, 2020 – Scientists analyze the threats faced by deep-sea animals that migrate vertically each day.
August 12, 2019 – The UN is urged to include the midwater in upcoming discussions about management of life in the open ocean.
August 5, 2019 – In late June researchers from MBARI joined engineers from Woods Hole Oceanographic Institution to test a new breed of undersea robot.