“The biological pump”: Hang around biological oceanographers for a while and they might not mention it, but if you ask them about it, their eyes will light up and they might exclaim, “Oh! That’s how all the stuff from the surface sinks to the deep!”

The “stuff” is mostly algae, bacteria, and other microbial life. Unlike terrestrial environments, where biomass (e.g., plants) turns over on quite long time-scales, in the ocean most life is single-celled and the average “life span” is on the order of a few days, since most of these microbes are either eaten, infected by viruses, or otherwise die and sink to the deep ocean (if they’re dense enough themselves or attached to things that are). Thus, the biological pump is the mechanism by which the ocean interacts with and influences Earth’s climate, capturing a portion of the carbon dioxide produced by human activities, storing it in cellular biomass, and exporting it to the deep ocean and deep ocean sediments—storing it, in some cases, for thousands of years.

On our research cruise from May 17th to 19th, we studied processes involved in the degradation of biomass produced at the surface which sinks to the deep ocean and becomes part of the sediments. For this particular cruise, our goals were mostly retrieval of experiments set out on the seafloor months ago, but we also deployed a new experiment on the seafloor.” Due to the cold temperatures in the deep sea and seafloor (about the same as your refrigerator at home), life is slower than at the surface, and experiments often need to be carried out for months or years to observe a response.

Additionally, the team took several profiles of the ocean waters and deep-sea sediments to collect nucleic acids from the microorganisms to contextualize and characterize the microbial diversity present and how it compares with past and future collections.

The Stanford research team studies enigmatic microbes that inhabit the deep ocean and deep-ocean sediments and their interactions with the surrounding chemical environment. On this cruise, Professor Anne Dekas and Nicolette Meyer studied a microbial process called nitrogen fixation in deep-sea sediments. Nitrogen fixation is a microbially mediated process that converts ubiquitous, but generally inert, nitrogen forms into forms of nitrogen accessible to cellular processes and other organisms. Only certain microorganisms can perform this function, and when the ratio of usable forms of carbon to nitrogen is tilted towards carbon in the deep sea, beware of nitrogen fixation! While it’s known that deep-sea nitrogen fixation is occurring, the rates, environmental controls, and exact microbes responsible for this process in deep seafloor sediments are still a mystery.

Like the MBARI team, CalTech researcher Sujung Lim was mainly retrieving past cultivation experiments from the seafloor. Over 10 years ago, a dead whale (named “Francisco” by the research team) was set out on the deep seafloor to study the successional patterns involved in its degradation. The whale is nothing but bones now, though its effects on the seafloor environment can still be detected in surrounding sediments. The large influx of organic matter from the whale has long-reaching effects; for example, the accumulation of crustacean scavengers whose carapaces could supply can supply nutrients to the otherwise relatively nutrient-poor seafloor. We still don’t understand the microbial community structure that helps to mediate the decomposition of chitin in sediments lacking oxygen. To address this, Sujung retrieved experiments which aim to isolate and culture microbes that degrade chitin and its related breakdown products. 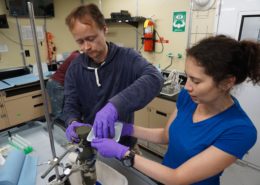 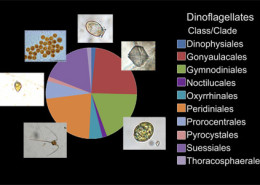 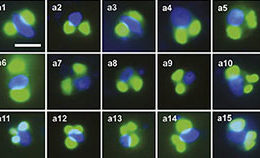 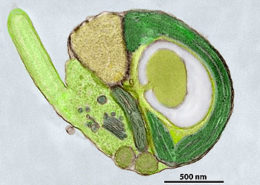