MOSS LANDING–The National Oceanic and Atmospheric Administration recently approved a five-year, $11 million grant to the Central and Northern California Ocean Observing System (CeNCOOS). This grant will allow CeNCOOS to provide real-time information about ocean conditions that are essential for the shipping, fishing, and aquaculture industries; the U.S. Coast Guard, pollution-control agencies, and ocean scientists from Central California to the Oregon border.

On December 5-6, 2016, CeNCOOS will hold its annual meeting to discuss recent discoveries and future plans for monitoring the coast. The first day of the meeting will include an overview of observing activities by CeNCOOS scientists. The second day will be focused on CeNCOOS planning and governance.

The meeting will be held at the Monterey Bay Aquarium Research Institute (MBARI) in Moss Landing, California. CeNCOOS is hosted and partially supported by MBARI.

The meeting is open to the public, but pre-registration is required. Details and registration links can be found on the CeNCOOS website.

About CeNCOOS’ “eyes on the ocean” 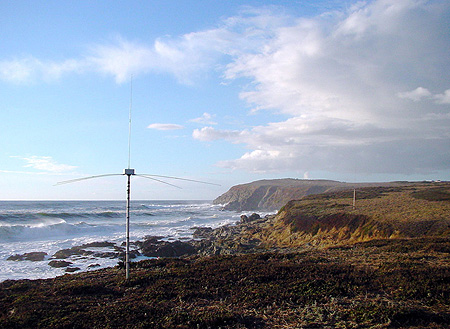 A CeNCOOS ocean-current monitoring station on the Central California coast.

Since 2004, CeNCOOS has funded coastal monitoring stations that measure nearshore currents and seawater characteristics from Morro Bay to Trinidad Head, near the California/Oregon border. The organization currently supports 27 radar systems to monitor ocean currents and 14 shore stations that measure water temperature, salinity, oxygen content, and pH (acidity). Data from these facilities are available for free on the web within hours of being collected. In addition, CeNCOOS-funded scientists use computer models to forecast ocean conditions, monitor algal blooms, and track large-scale ocean events such as El Niños.

Many government agencies and private companies use CeNCOOS data in their day-to-day operations. For example, aquaculture firms rely on information about the pH and oxygen content of seawater to determine whether young oysters should be placed in open waters or isolated in holding ponds. If the young oysters are exposed to seawater that is too acidic, their shells will become thin and they may die. CeNCOOS works closely with several aquaculture operators who provide space for monitoring instruments and benefit from the data provided by these instruments.

The US Coast Guard also routinely uses CeNCOOS data. CeNCOOS data about ocean currents help the Coast Guard search for vessels in distress and respond to oil spills, including the disastrous Cosco Busan spill in 2007. 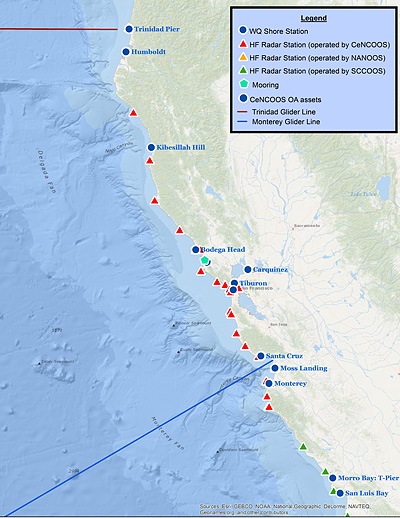 Map of CeNCOOS monitoring stations on the Central California coast.

On a larger scale, CeNCOOS data helped researchers identify and track the evolution of the marine heat wave (popularly known as the “warm blob”) that affected marine life all along the Pacific Coast in 2015. During this unusual ocean condition, populations of forage fish declined and many seabirds and marine mammals died of starvation. CeNCOOS data collected over the last 10 years are vital to researchers studying the effects of long-term climate change and ocean acidification on coastal waters and coastal ecosystems.

Like the US Weather Service, CeNCOOS not only provides information on current conditions, but also creates ocean forecasts using sophisticated computer models. Among the users of these models are commercial fishermen who want to know the best places to find fish and sewer-treatment operators who need to determine where the plumes of ocean discharges are likely to flow. CeNCOOS is also helping fund a model to forecast toxic algal blooms.

In addition to shoreside monitoring stations, CeNCOOS funds two underwater robots that patrol the coastal waters, traveling back and forth from the coast to 1,000 kilometers offshore every week. These robotic “gliders” collect information about ocean temperature and salinity that helps keep the model forecasts on track. 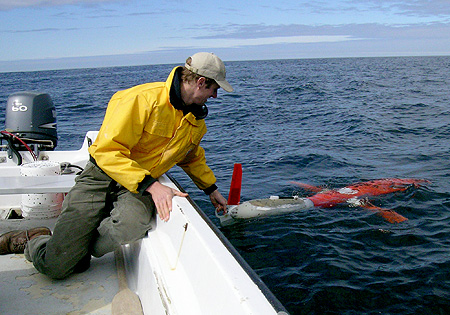 CeNCOOS partners with both commercial organizations and ocean researchers. Currently CeNCOOS provides funding for 25 scientists at 14 research institutions from California Polytechnic State University, San Luis Obispo, to Oregon State University.  Many of these investigators add their own resources in the form of equipment, technicians, and students, expanding the scope of CeNCOOS’s work, providing additional expertise, and training young researchers.

CeNCOOS is part of the US Integrated Ocean Observing System (IOOS), which is a network of 11 ocean-monitoring programs around the continental US, Alaska, and Hawaii.

Over the next five years, CeNCOOS is particularly interested in finding practical and cost-effective methods for monitoring increasing seawater acidity and declining oxygen concentrations at depth. These processes are already affecting the aquaculture and fishing industries, as well as some coastal ecosystems. With its new federal grant, CeNCOOS will be able to provide scientific data essential to understanding and tracking these long-term changes in our coastal ocean.