A small fleet of ships and robotic submersibles are performing a kind of water ballet in northern Monterey Bay this month, observing and following the evolution and consequences of algal blooms as part of MBARI’s CANON (Controlled, Agile, and Novel Observing Network) project and the multi-institutional BloomEx field trials. The timing was fortuitous! A significant bloom of the toxic algae Pseudo-nitzschia australis with its associated toxin, domoic acid, was detected and tracked by the array of instruments deployed for the experiment. This finding has been accompanied by reports from the California Department of Fish and Game of sick and dying marine mammals.

A holistic approach to research

Most ocean research involves either placing instruments on fixed moorings to make “point measurements” or having research vessels travel in a grid pattern, taking measurements as they go. In either case, the study area typically remains fixed, even as the features of scientific interest enter and exit the study area due to shifting ocean currents and the behavior of organisms. CANON’s primary goal is to develop methods for tracking ocean features as they move through the ocean, and for studying how the microscopic plankton in this water change over time. Photosynthetic plankton, or phytoplankton, support life in the oceans and profoundly affect global elemental cycles and climate. Some plankton blooms, however, are dominated by algae that produce toxins that are harmful to seabirds and marine mammals, and potentially humans as well.

The CANON experiments represent an alternative, though technically challenging, research strategy: using instruments, ships, and robotic vehicles that drift with or follow ocean features, such as phytoplankton blooms. Ideally, such vessels and instruments could follow these blooms for days or even weeks at a time. This would allow researchers to study changes in the community of microscopic organisms over time.

In September, the CANON team performed a two-week experiment 160 kilometers (100 miles) offshore. This month the CANON team moved closer to shore, studying the highly productive, but rapidly-changing nearshore environment of Monterey Bay. For this field venture, the team merged forces with a Naval Research Laboratory experiment and many other research organizations, leading to this joint BloomEx experiment.

The MBARI research team includes biological oceanographers Francisco Chavez, who is the project manager, and John Ryan; marine biologists Alexandra Worden, Ken Smith, Bob Vrijenhoek, and Chris Scholin; physical oceanographer Steve Ramp; vehicle technologist Jim Bellingham; and autonomy researcher Kanna Rajan. The technical team created new capabilities, including a new underwater robot along with new models and systems for programming the robots and compiling, analyzing, and visualizing the data they collect. The CANON project team simultaneously collects data on the physical and chemical properties of a particular water mass, along with detailed information on the algae, bacteria, and other microscopic organisms within that water mass. The researchers also measure the abundance of key organisms, determine how fast they are growing, and estimate how fast they are dying off or being consumed.

The goal of this month’s experiment is to identify, characterize, and predict the development and movement of phytoplankton blooms in Monterey Bay on time scales of days to weeks. The experiment is interdisciplinary, multi-institutional, and multi-programmatic. The disciplines include interrelated oceanographic (biological, chemical, geological, physical) and engineering (autonomy, platform and sensor development, decision support, modeling) elements.

The focus is on the northern part of Monterey Bay where highly concentrated algal blooms typically develop in autumn. The general plan is to locate a bloom in the focus area, either from remote sensing or in situ information, tag the bloom with drifters and gliders, follow it with autonomous underwater vehicles (AUVs), and predict its development and movement with models. The bloom will be followed until it either decays or advects outside of Monterey Bay. The exercise began on October 4th and will be repeated again and again until the end of the experiment on October 29th.

Three of MBARI’s Environmental Sample Processors (ESPs) are moored in northern Monterey Bay, where they automatically filter seawater and analyze the DNA of microscopic organisms in the water, as well as detecting the algal toxin, domoic acid, produced by Pseudo-nitzschia australis. The ESPs transmit the results of these analyses back to researchers via radio signals in real time. In addition, the instruments collect water samples for further analysis back in the laboratory. All the while, the various AUVs, gliders, drifters, and ships maneuver around the ESPs collecting additional data about the physical and chemical properties of the water around the ESPs. High-frequency radar transmitted from shore provides information on surface currents. 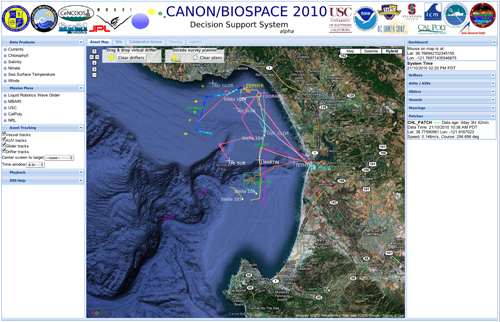 The decision support system allows researchers all around the country to view all deployed assets and much of the data in real time.

The October experiment got off to a fast start, with the deployment of the ESPs, as well as underwater and drifting vehicles of varying complexity and sophistication traveling various paths through the bay. A sophisticated decision support system developed jointly by MBARI and the University of Southern California’s Robotic Embedded Systems Laboratory tracks all the assets and data, and is available online to all the researchers involved in the project as well as to the general public at /canon/DSS.htm. This system allows the researchers located around the country to keep track of activity and respond as the conditions in the bay change, rapidly changing the course of their marine assets and sampling regimens as needed.

In terms of science, a strong signal was quickly detected for the Pseudo-nitzschia australis bloom mixed with an equally strong bloom of the dinoflagellate Prorocentrum micans. Winds generated some upwelling, causing blooms to form at the surface in the central area of the bay that were then advected northward and eastward toward shore. When the winds relaxed, a mass of algae seemed to sink to 10 – 20-meters depth. Researchers expect the algal blooms that sank to depth in the bay will eventually get kicked up by upwelling and be detected again at the surface.