Bringing the Southern Ocean into the classroom 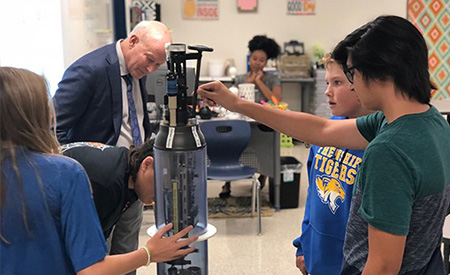 Students at Frenship High School in Texas examine a transparent model of a SOCCOM float during a class visit from SOCCOM researcher Robert Key. Image courtesy of Robert Key.

When sixth graders at Seaside Middle School heard that they were going to help with a scientific study of the ocean around Antarctica, they were excited. For several weeks they had been learning about human impacts on the Earth. Now they were actually going to be part of an important scientific investigation of these impacts. In fact, they were going to have their very own ocean-monitoring float!

These junior high school students were participating in a six-year, $21 million multi-institution research project called SOCCOM–Southern Ocean Carbon and Climate Observations and Modeling. The overall goal of the SOCCOM project is to collect detailed long-term data on the biology and chemistry of the stormy Southern Ocean. Although the Southern Ocean is one of the most remote places on Earth, it has a huge impact on the Earth’s climate. In fact, SOCCOM researchers are hoping to use their data to improve global climate models.

Because the Southern Ocean is so difficult to study using ships, SOCCOM researchers are building and deploying more than 200 ocean-profiling floats, which can collect data summer and winter, day and night, even while underneath sea ice. Dropped overboard from research ships that happen to be traversing the Southern Ocean, each of these floats will drift with the open-ocean currents for up to five years.

The floats spend most of their time 1,000 meters below the sea surface. But every 10 days they rise up toward the surface, collecting data as they go. When they reach the surface, they send their data back to researchers on shore, then descend back into the depths.

SOCCOM floats carry a wide variety of instruments that collect data on ocean temperature, salinity, pressure, pH (acidity), chlorophyll fluorescence (an indicator of microscopic algae in the water), nitrate (an important nutrient for marine algae), oxygen concentrations, and particles in the water. MBARI researchers helped develop some of these instruments.

As part of their grant from the National Science Foundation, SOCCOM researchers wanted to find new ways to share their research with the public. The Adopt-A-Float Program was set up to help engage grade-school students, many of whom would not otherwise get to be involved in large-scale scientific research. 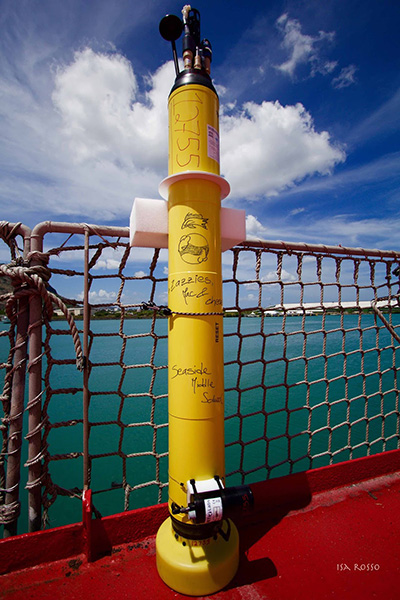 As Trish Gravem, a teacher at Seaside Middle School put it, “The SOCCOM floats provide a beautiful tie-in for our human-impacts curriculum. These impacts can sometimes seem far away. But adopting a float makes the curriculum very real.”

“We have a view of the Monterey Bay from our classroom,” she added. “So the students do have connections with the ocean. But many of them are low income, and they don’t own a lot of ‘stuff.’ Having their own SOCCOM float makes them feel like they ‘own’ something expensive and important, not just to scientists, but to the world.”

George Matsumoto, a senior education and research specialist at MBARI, runs the Adopt-A-Float Program, recruiting teachers and pairing them with researchers who travel across the Southern Ocean to deploy the floats (place them in the ocean). So far almost 50 SOCCOM floats have been named and adopted by students across the United States.

The names given to the floats provide a fascinating glimpse into the minds of grade-school students. Gravem’s students at Seaside Middle School named their float “Zazzy, Mac & Cheese” after their class pets (a fish named Zazzy and two mice named Mac and Cheese). 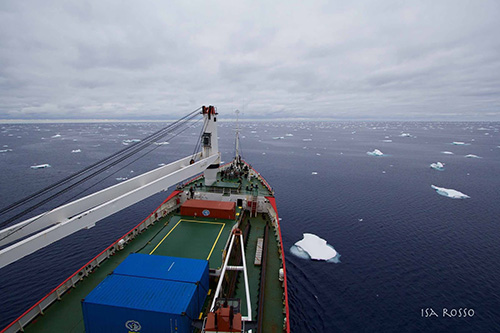 When SOCCOM floats are deployed, the researchers on the ships write blogs send back photographs that give students a glimpse of the cold, vast Southern Ocean. Image: Isa Rosso / SOCCOM / SIO

After giving their float a name, each class can follow a blog written by the scientist in charge of deploying their float. These blogs give the students a firsthand view into the joys and challenges of research in the vast Southern Ocean. The blogs also include photos of researchers and technicians writing the assigned names on each float and adding artwork provided by the students

“Once we had named our float, the students asked about it every day.” Gravem explained. “They couldn’t wait to hear from the scientists. At one point a big storm rocked the ship and lots of stuff, including the floats, fell off some storage racks. The scientist who wrote the blog was worried that some of the floats might have been damaged. When my kids heard that their float was still working, there was a huge celebration in the classroom!

“The students’ favorite part is seeing the photos and reading the blog entries from the scientists,” she added. “These made it more real.” 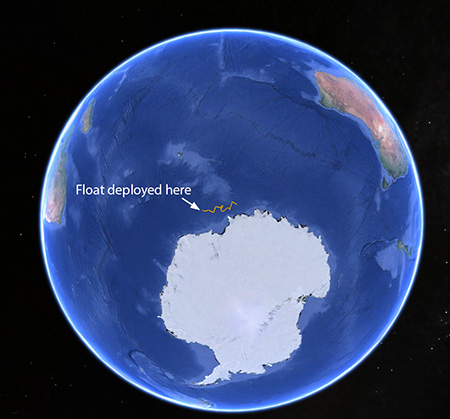 This map shows the track of the float adopted by students at Seaside Middle School from the day it was deployed (December 27, 2017) until the first time it was not able to reach the sea surface due to sea ice (May 8, 2018). Base image: Google Earth.

Within a few days after the floats are deployed, they begin sending data back to shore. Students can track their float and download data from it using the SOCCOM website, and teachers often use the data in assignments. Gravem has had her students graph the data from the floats. Several teachers have posted instructions for using the float data and one teacher developed an entire lesson plan around the data. One university professor even used SOCCOM data to teach linear regression analysis.

The Adopt-A-Float Program is currently gearing up for its third year, with about 30 to 35 floats being deployed each year. Program director Matsumoto said, “These floats are going to be deployed no matter what. My job is to get them adopted. The feedback that I’m getting so far from the teachers is that they love it.”

Dec 6, 2018 – Adopt-A-Float program lets grade-school students participate in a major scientific study of the vast Southern Ocean.
August 14, 2018 – Data from a network of robotic floats carrying high-tech sensors suggest the Southern Ocean may take up much less carbon dioxide from the atmosphere than expected.
Aug 10, 2016 - Peering into the insides of a machine can be a useful way to learn about how it works. MBARI researchers Ken Johnson and Hans Jannasch created a transparent version of a profiling float, an instrument that makes biogeochemical measurements in the ocean, for educational purposes.
Apr 21, 2016 - About a week ago, MBARI marine chemists Hans Jannasch and Ken Johnson went on a little boat ride, chasing an open-ocean profiling float that was drifting in the California Current, about 100 miles offshore.