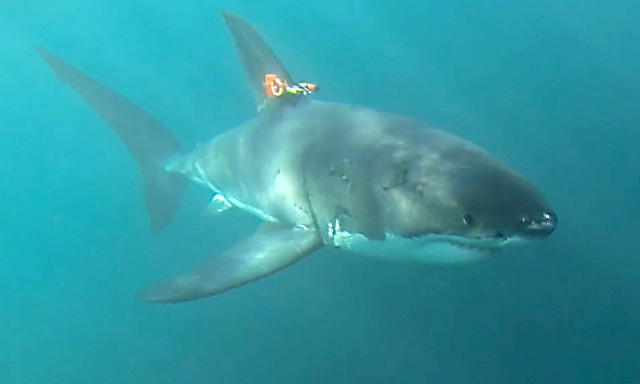 In 2015, researchers tested this prototype of their shark-cam tag on white sharks in South Africa. This month they hope to test it out in the “White Shark Cafe.” Image courtesy of the Monterey Bay Aquarium.

Each spring white sharks leave the California coast and converge on a remote portion of the Pacific Ocean, halfway between California and Hawaii. Researchers have tracked sharks heading out to this “White Shark Café,” but haven’t figured out why the sharks go there. During April and May of 2018, an interdisciplinary group of researchers from Stanford University’s Hopkins Marine Station, the Monterey Bay Aquarium, MBARI, the Schmidt Ocean Institute (SOI), and other organizations are conducting a monthlong research cruise to answer this question.

Data from tags attached to the sharks shows that, after they arrive at the white shark cafe, the sharks make a series of deep dives. However, scientists can’t tell what the sharks are doing during these dives. They might be hunting, mating, or doing something else entirely. The researchers on the cruise hope to shed new light on this mystery, as well as to find out what makes this part of the ocean so attractive to white sharks.

Using SOI’s state-of-the-art research vessel Falkor, the researchers will deploy a variety of high-tech ocean instruments to track the sharks and learn about the seldom-studied ocean environment of the White Shark Café.

MBARI deep-sea biologist Bruce Robison will use SOI’s remotely operated vehicle (ROV) SuBastian to study the animals and physical conditions in the deep waters where the sharks congregate. Robison has decades of experience using MBARI’s ROVs to study midwater animals, and will be sharing his knowledge with the researchers on this cruise.

Other researchers will also use an underwater glider and two surface robots called Saildrones to listen for sounds emitted by tags that Stanford researchers placed on sharks when they were near the California coast.

MBARI engineers have also developed a miniature camera tag that they hope to attach to the fin of one or more white sharks during the cruise. This tag would record video while the shark dives into the depths. Later the camera tag would be released and float to the surface, allowing researchers to see the video and data collected.

The public can follow this expedition and learn more about about the white-shark café on the web site of the Schmidt Ocean Institute:

April 11, 2019 – New research using an MBARI-inspired “camera tag” shows that some sharks in South Africa spend a lot of time in kelp beds.
June 13, 2018 – A monthlong research cruise revealed that the “White Shark Café” supports much more abundant and diverse marine life than scientists expected.
Apr 27, 2018 – An interdisciplinary group of researchers are conducting a monthlong research cruise at the “White Shark Café,” in the Pacific Ocean between California and Hawaii.