News Release from the
National Oceanic and Atmospheric Administration (NOAA) and MBARI: 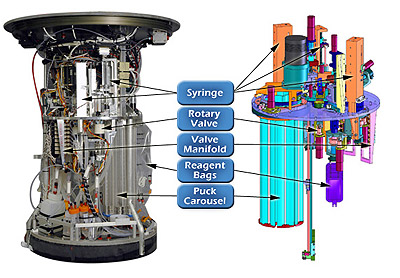 This image shows a photograph and diagram of the Environmental Sample Processor with key features highlighted.
Image: © 2008 MBARI

Scientists at NOAA’s National Centers for Coastal Ocean Science and the Monterey Bay Aquarium Research Institute (MBARI) have successfully conducted the first remote detection of a harmful algal species and its toxin below the ocean’s surface. The achievement was recently reported in the June issue of Oceanography.

This achievement represents a significant milestone in NOAA’s effort to monitor the type and toxicity of harmful algal blooms (HABs). HABs are considered to be increasing not only in their global distribution, but also in the frequency, duration, and severity of their effects. HABs damage coastal ecosystem health and pose threats to humans as well as marine life. Climate change is expected to exacerbate this trend, since many critical processes that govern HABs dynamics, such as water temperature and ocean circulation, are influenced by climate.

A MBARI-designed robotic instrument called the Environmental Sample Processor, or ‘ESP,’ designed as a fully-functional analytical laboratory in the sea, lets researchers collect the algal cells and extract the genetic information required for organism identification as well as the toxin needed to assess the risk to humans and wildlife. The ESP then conducts specialized, molecular-based measurements of species and toxin abundance, and transmits results to the laboratory via radio signals.

“This represents the first autonomous detection of both a HAB species and its toxin by an underwater sensor,” notes Greg Doucette, Ph.D., a research oceanographer at NOAA’s Center for Coastal Environmental Health and Biomolecular Research laboratory in Charleston, South Carolina. “It allows us to determine not only the organism causing a bloom, but also the toxicity of the event, which ultimately dictates whether it is a threat to the public and the ecosystem.”

For the first demonstration of the ESP’s ability to detect HABs and their toxins, Doucette and his MBARI colleague, Chris Scholin, Ph.D., targeted certain members of the algal genus Pseudo-nitzschia and their neurotoxin, domoic acid in Monterey Bay, California. 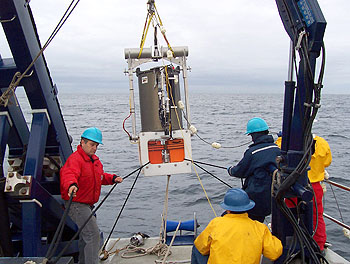 Pseudo-nitzschia and domoic acid have been a concern in the Monterey Bay area for well over a decade. In 1991, the first U.S. outbreak of domoic acid poisoning was documented in Monterey Bay. This outbreak resulted in the unusual deaths of numerous pelicans and cormorants that ingested sardines and anchovies, which had accumulated the domoic acid by feeding on a bloom of the toxic algae.

In the spring of 1998, a mass mortality of sea lions in and around the Monterey Bay area was attributed to the sea lions’ feeding on domoic acid contaminated anchovies. Since that time, Pseudo-nitzschia and domoic acid have appeared on virtually an annual basis in California coastal waters and are the objects of an intensive statewide monitoring program run by the California Dept. of Public Health. Humans also can be affected by the toxin through consumption of contaminated seafood such as shellfish.

“Our public health monitoring program is one of the many groups that can benefit directly from the ESP technology and ability to provide an early warning of impending bloom activity and toxicity,” said Gregg Langlois, director of the state of California’s Marine Biotoxin Monitoring Program. “This is critical information for coastal managers and public health officials in mitigating impacts on the coastal ecosystem, since the toxicity of these algae can vary widely from little or no toxicity to highly toxic.”

Beyond improving forecasting of HABs, this research will contribute to the rapidly emerging U.S. Integrated Ocean Observing System (IOOS) by adding a new way to make coastal ocean observations. IOOS is a network of people and technology coordinated by NOAA that work together to generate and disseminate continuous data on our coastal waters, Great Lakes, and oceans.

NOAA understands and predicts changes in the Earth’s environment, from the depths of the ocean to the surface of the sun, and conserves and manages our coastal and marine resources. Visit: http://www.noaa.gov.

The Monterey Bay Aquarium Research Institute (MBARI) is a nonprofit research institution where scientists and engineers work together to explore and study the sea. In the words of founder David Packard: “The mission of MBARI is to achieve and maintain a position as a world center for advanced research and education in ocean science and technology, and to do so through the development of better instruments, systems, and methods for scientific research in the deep waters of the ocean.” Located in Moss Landing, California, MBARI is supported primarily by the David and Lucile Packard Foundation.