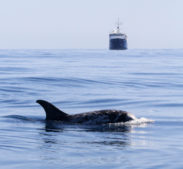 Why do sonar-sensitive beaked whales continue to hunt near naval test ranges?

Beaked whales dive up to depths of 3,000 meters several times a day in order to catch deep-sea squids, but little is understood about where they decide to dive. Although they appear to be sensitive to mid-frequency sound waves, operational Navy sonars, beaked whales continue to hunt within naval sonar ranges. The Acoustical Ocean Ecology Group sought to understand why these areas, rather than areas with less mid-frequency Navy sonar activity, were uniquely valuable to the beaked whales. We also wanted to determine whether or not their responses to the presence of sonar in these areas could be detrimental to their population.

What we discovered is that while areas in and adjacent to the range were geographically similar, the presence of deep-sea squid was drastically different. Not only did the sonar-heavy areas that beaked whales consistently inhabit contain higher concentrations of squid, but the squid were also much larger. Most importantly, the squid in these preferred areas were much more clustered, resulting in squid being close to each other—and thus making it easy for a whale holding its breath to capture more than one on each of its 10 daily dives. Because each dive made by a beaked whale is energetically costly and time limited, these squid-rich areas remain important habitat for beaked whales, despite naval activities. This surprising “patchiness,” in which certain parts of seemingly indistinguishable ocean are actually quite different biologically, indicates that the deep sea is much less homogeneous than scientists first believed.

Midwater animals get a little help from their friends

Another area of patchiness we’ve investigated is how squid, fish, and crustaceans like krill and shrimp organize within layers. Throughout the world’s oceans, animals in the relatively featureless midwater will group together into layers that can cover tens or even hundreds of kilometers. This area is collectively referred to as the “deep scattering layer” because of the reflective characteristics of the collective group. In fact, the deep scattering layer’s strong response to sonar led the layer to be incorrectly interpreted as the ocean floor by early sonar.

Acoustic analysis of the internal organization of different layers of animals off southern California revealed that animals of the same kind and size grouped together to form small schools inside the layers, something that was a surprise. Traditionally, schooling was believed to be a behavior mostly found closer to the ocean surface.

Our analysis also revealed that these individual aggregations are responsive to changes in neighboring aggregations, showing that they are organized at multiple levels. As Risso’s dolphins dove to hunt within an aggregation of deep-sea squid, the squid would form a closer group. The open space left by the consolidating squid was quickly absorbed by neighboring groups of organisms, whether crustaceans or fish. Rather than a response from just the aggregation of targeted prey, this response from non-prey animals that seemed to fill in the gaps indicates a larger, community-wide benefit to keeping an unbroken horizontal layer as well as an important anti-predator benefit from schooling. 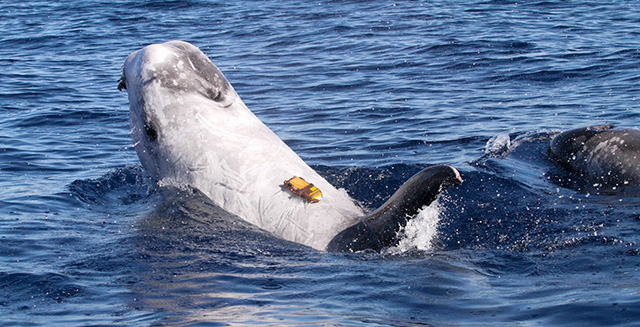 December 12, 2019 – Using advanced echosounders, MBARI researchers are measuring the distribution, abundance, type, size, and movement of predators and their prey in the deep sea. 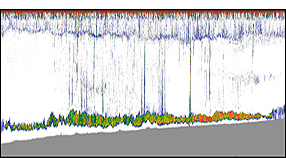 Sept 19, 2017 – An unusual data signal recorded in the ocean with an echosounder turned out not to be fish, but diving seabirds.
Scroll to top