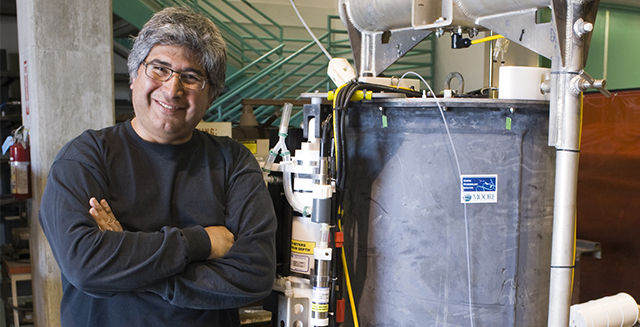 MBARI Senior Research Technician Roman Marin III passed away unexpectedly last month. MBARI staff will sorely miss Roman’s hardworking, can-do attitude, his abilities in both science and hands-on engineering, and perhaps most of all his quirky sense of humor.

For the last two decades Roman worked on MBARI’s Environmental Sample Processors (ESPs)—robotic biochemistry laboratories that have given biologists and resource managers unprecedented views of life in the ocean and in freshwater. Roman helped develop the first ESPs and was essential in getting these extremely complicated devices to work, and to work reliably, in a wide variety of environments, from the deep seafloor to remote streams in Montana and Wyoming.

Roman’s first career was as a car mechanic and, by all accounts, he was an extremely good one. But he decided to go to back to college and, by the mid 1990s, he was doing graduate research in marine biology at the University of California, Santa Cruz. In 1998, he completed his master’s thesis under professor Mary Silver, studying harmful algal blooms (HABs) in Monterey Bay. 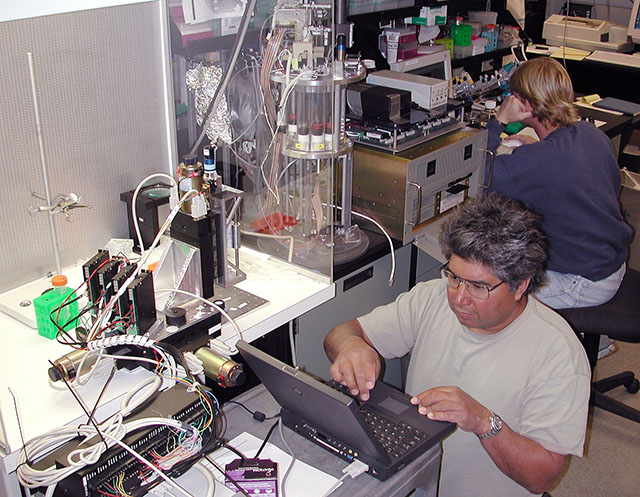 Chris Scholin, MBARI president and CEO, worked closely with Roman during his time at UCSC and was instrumental in getting him hired at MBARI. “Roman and I were working on a method for quickly detecting toxic algae,” Scholin said. “We knew that the procedure could be fully automated, which would allow us to create an ‘early warning system’ for HABs, but there was a long list of problems to solve before we could accomplish that goal. As we chipped away at those obstacles, Ross Heath, MBARI’s director at the time, took notice of Roman and was impressed by his enthusiasm and passion for ocean science. One day I ran into Ross and he asked me what I thought about Roman. I replied, ‘I think he’s a keeper,’ and Ross said, ‘Hire him.’ We did. In fact, he was the first research-department hire, other than myself, working on what eventually became the ESP.”

“We went through many challenges in developing the ESP,” Scholin continued, “but you could always count on Roman to be on the front lines pushing to make the vision become reality, both in the field and in the lab; he was a true believer. When asked about those challenges last year aboard the research vessel Falkor, Roman reflected, ‘One of the biggest hurdles we had to overcome was to have the [ocean science] community actually believe we could do what we said we could do.’” 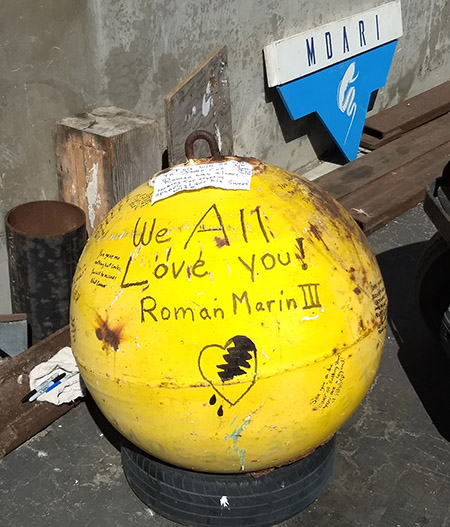 MBARI staff signed a float used for a research mooring as a way of saying goodbye to Roman. Image: Peter Walz © 2019 MBARI

“Roman was one of MBARI’s finest,” Scholin added. “I never met a person who was so appreciative of what life offered, so gregarious among his many friends, and so caring for his family. People from all walks of his professional life related to him as a father, brother, and a son—in my case, all three.”

Research specialist Peter Walz, who shared an office with Roman during his 20+ years at MBARI, concurred. “He was a guiding light for a lot of us. We had many memorable conversations about science, technology, and life in general,” Walz said. “He worked hard, but he was always reminding us to take care of ourselves, and thinking about the bigger things in life. Overall, he was just a remarkable guy.”