Rescuing an open-ocean float on a stormy day 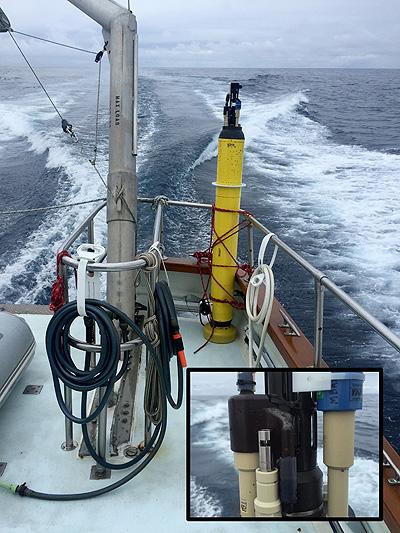 This photo shows the rescued profiling float strapped to the railing of the research vessel John Martin as the boat returned to Moss Landing. The black cylinder on the left in the inset photo covers the malfunctioning pH sensor. Photos: Hans Jannasch

About a week ago, MBARI marine chemists Hans Jannasch and Ken Johnson went on a little boat ride, chasing an open-ocean profiling float that was drifting in the California Current, about 100 miles offshore. The float carried several ocean-monitoring instruments, including a pH (ocean-acidity) sensor that had stopped working. The researchers wanted to recover the float to figure out what had gone wrong.

Jannasch and Johnson have installed similar pH sensors on about 80 profiling floats that have been deployed in the Southern Ocean as part of the $21-million  Southern Ocean Carbon and Climate Observations and Modeling (SOCCOM) program. Unfortunately about 10 percent of these pH sensors have failed. But it’s extremely difficult and expensive to recover floats drifting in the stormy Southern Ocean. So that’s why the two researchers were hoping to rescue this float, which happened to be drifting relatively close to home.

Although the weather was cloudy, with squalls threatening offshore, the wind was light and the waves were small, so the research vessel John Martin, from Moss Landing Marine Laboratories, made good time. Jannasch described the trip: “We left the harbor at 4 a.m. and reached the float around 12:30 in the afternoon. We’d been tracking the float using its GPS position, which was relayed to shore by Iridium satellite. When we thought were in the neighborhood, the captain went really slowly until we spotted a little black cylinder bobbing in the waves…The float doesn’t have much buoyancy and is not designed to be seen at the surface, so each time a wave passed by, the top of the float would disappear from view.”

When they reached the float, the researchers launched an inflatable dinghy and paddled over to it. Johnson pulled the float over the bow of the inflatable and they returned to the John Martin.

“The last hour of the trip out was bumpy and the weather was deteriorating as we pulled up to the float, with rain starting, Johnson said. “But we had the float on board and were heading home before the wind really picked up. Any later and it might have been a bit sketchy. There were lots of whales!” They arrived back in Moss Landing around 8:00 that night.

Jannasch has spent the last week or so operating the float in MBARI’s test tank and checking electrical systems in the float and the pH sensor. He has found evidence of a short circuit in the sensor, but is still trying to determine the cause. In any case, the rescue mission was a success.