A network of pores helps this fish feel what goes bump in the dark.

A whalefish lives in the inky depths below 1,000 meters (3,300 feet) called the midnight zone. Its eyes are poorly developed and small—in fact, they lack lenses and are not even capable of forming images. Instead, a whalefish relies on a network of sensory pores that run over the head and down the length of the body. Those pores feel vibrations in the water and allow a whalefish to detect when predators or prey are near. Many fishes have these sensory pores, usually arranged into the lateral line running along their sides. In the whalefish, the pores are quite large and lie along ridges that give the fish a crocodile-like appearance.

Like many deep-sea animals, whalefishes have a brilliant reddish coloration. Red light does not travel far in seawater and cannot penetrate into the deep sea, so anything red appears black. The intense red color helps a whalefish disappear into the darkness to ambush unsuspecting prey or avoid a hungry predator.

There are 30 species of whalefish in the family Cetomimidae. Most are only 20 centimeters (almost eight inches) long, with the largest species reaching up to 40 centimeters (16 inches) in length. Their name derives from their resemblance to a baleen whale with a broad trunk and a large, gaping mouth for gulping prey. One whalefish MBARI researchers observed had a swollen stomach indicating that it had the recent fortune to gulp in a large fish as prey.

Whalefishes have rarely been collected alive, so much of their biology remains a mystery. Most research on these fishes has been based on specimens collected by deep-water trawl nets. MBARI’s remotely operated vehicles (ROVs) very rarely encounter these obscure fishes. In the more than 27,000 hours of video MBARI’s ROVs have recorded, we have logged just 16 observations. But each observation offers a valuable chance to learn more about this mysterious resident of the ocean’s midnight zone. 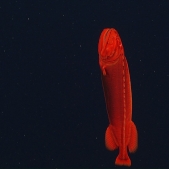 Habitat: midwater, in the twilight (mesopelagic) and midnight (bathypelagic) zones

The deep-sea squid (Bathyteuthis sp.) is unusual among squids. Instead of laying egg cases on the seafloor or releasing a drifting egg mass, females brood their developing offspring.

Dragonfishes are cunning predators that lie in wait to ambush unsuspecting prey. 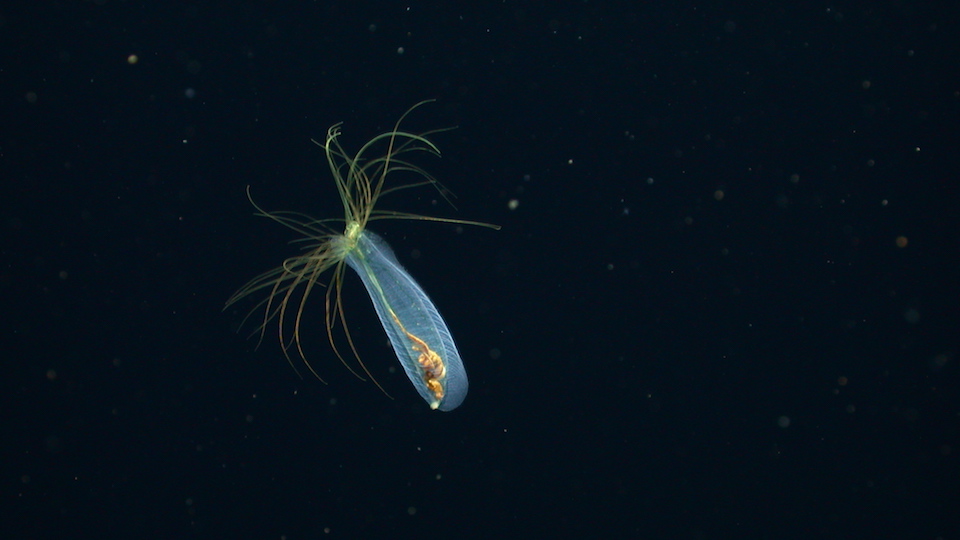 The balloon worm drifts through the midwater, casting a mucous net to feed on tiny bits of food slowly sinking from above.
Scroll to top