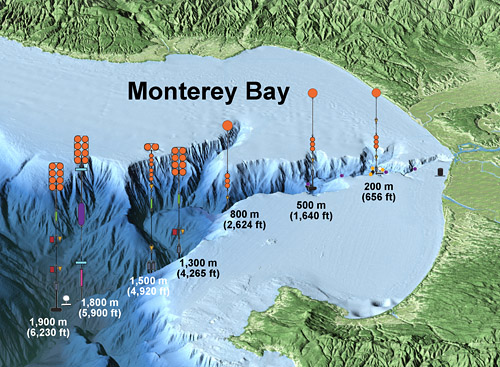 This illustration (not to scale) shows the locations and depths of some of the instruments being placed within Monterey Canyon as part of the Coordinated Canyon Experiment. Image: © 2015 MBARI

MOSS LANDING, CA – Underwater avalanches and turbidity currents carry huge amounts of sediment, organic material, and pollutants down submarine canyons and into the deep sea. Yet geologists know very little about how sediment moves during these events. This month, in what may be the most ambitious submarine-canyon study ever attempted, marine geologists from several countries are placing dozens of sophisticated instruments in Monterey Canyon. This international effort, the Coordinated Canyon Experiment (CCE), promises to give scientists a uniquely detailed and comprehensive view of sediment movement within the canyon.

The project is being led by MBARI geologist Charlie Paull, in collaboration with researchers from the United States Geological Survey, the Ocean University of China, the National Oceanography Centre in Southampton, England, and the University of Hull, England. 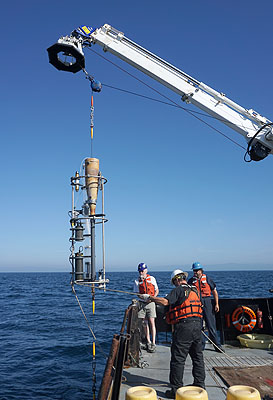 MBARI researchers lower a sediment trap into the water in Monterey Bay. This device will collect particles of sediment above the floor of Monterey Canyon during the Coordinated Canyon Experiment. Image: Roberto Gwiazda © 2015 MBARI

To make these measurements, the researchers will be pooling both their expertise and a wide variety of instruments. Robotic vehicles will be used to place instruments on the seafloor, provide communications links to shore, and make detailed maps of the canyon floor.

Ten arrays of instruments will be installed on the seafloor to monitor movements of water and sediment at depths of 200 to 1,900 meters and distances of four to 40 kilometers from shore. These instruments will measure currents, sediment concentrations, and the physical properties of the seawater. The instruments will be left in place for up to 18 months, documenting any flows that take place during that time.

In addition to the fixed instrument arrays, four beach-ball-sized “benthic event detectors” (BEDs) will be buried in the seafloor sediment. When sediment flows occur, the BEDs will be carried along with the sediment. Sensors inside each BED will record how fast they move, how far they go, and how they are tumbled by the flow. 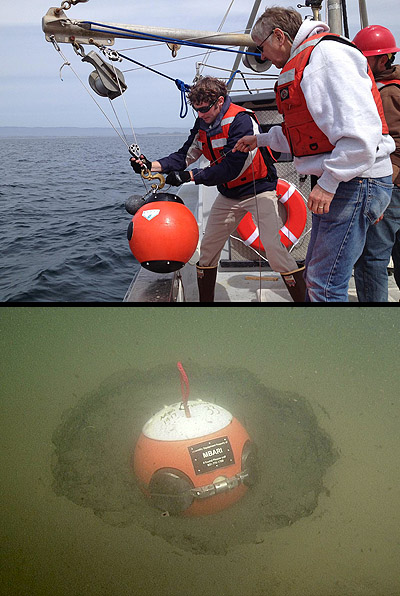 Top: MBARI engineers lower a benthic event detector (BED) into Monterey Bay. Bottom: After the BED sank to the seafloor, MBARI researchers used the remotely operated vehicle Ventana to dig a small pit in the seafloor sediment place the BED in the pit. The BED will record information as it is carried down-canyon during sediment flows in the canyon. Upper image: Denis Klimov © 2015 MBARI.

Unusual instruments such as the BEDs are necessary because the floor of Monterey Canyon is such an active place. If you could see Monterey Canyon from the sea surface, it would look somewhat like the Grand Canyon, with steep-sided walls and a narrow, winding canyon floor. Both canyons have central channels filled with sand.

Sand in the Grand Canyon is moved down-canyon by the Colorado River. After studying the “river of sand” in Monterey Canyon for 15 years, Paull and colleagues have concluded that sediment moves down Monterey Canyon in a variety of ways. Some sediment flows consist of strong water currents carrying just a small amount of sediment. Other flows, known as turbidity currents, consist of dense, fast-moving slurries of sand and water that can travel kilometers down the canyon in a matter of minutes. Still other flows occur when sediment on the floor of the canyon becomes unstable and slumps down-canyon. To make matters even murkier, some canyon events could involve all three of these processes.

During the Coordinated Canyon Experiment, researchers hope to study all of these different types of sediment flows by gathering extremely detailed data from a wide variety of instruments over a large area. As Paull put it, “We want to determine not just when sediment moves in the axis of the canyon, but how it moves, how long it moves, and where it moves. The point is to cover as much of the canyon as possible, from the head down to a couple of thousand meters depth. 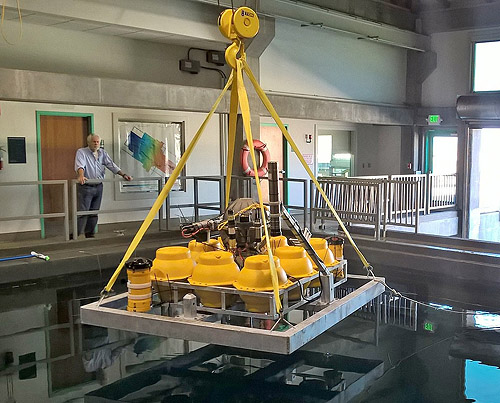 MBARI geologist Charlie Paull watches as an array of instruments (a “benthic instrument node”) is lowered into MBARI’s test tank in preparation for being placed on the seafloor during the Coordinated Canyon Experiment. Image: Krystle Anderson © 2015 MBARI

“We usually measure just a snapshot in time and space, so we’re like the blind men and the elephant—just seeing part of the picture,” Paull said. “By putting as many instruments in the canyon as we can, all at one time, we’ll get a better view of what’s going on down there.”

Placing all of these instruments in the canyon involves a concerted effort throughout the month of October 2015. But that’s just the beginning. The CCE is scheduled to continue for another 18 months, until spring 2017.

In fact, because it is so hard to communicate with instruments on the seafloor, the researchers won’t get detailed information from the instruments until April 2016. That’s when Paull will use MBARI’s underwater robots to service the instruments and retrieve the data.

The coming winter may give the researchers plenty to think about. If strong El Niño conditions continue in the Equatorial Pacific, the Central California coast is likely to experience powerful winter storms and unusually large waves. Such waves can sweep huge volumes of sand along the beaches of Monterey Bay and into the head of Monterey Canyon, potentially triggering underwater avalanches. Thus Paull is optimistic that the team will be able to collect plenty of interesting data…even if not all of their instruments survive.

“There is always a risk in putting instruments in the canyon,” Paull said. “But after many years, I think we’ve learned how to minimize these risks. And if we don’t take risks, we’re never going to be able to figure out what’s going on down there.”

April 6, 2022 – Motion-sensing “smart boulders” have provided new insight about the powerful sediment gravity flows that barrel down Monterey Canyon.
Aug 1, 2018 – The Society for Sedimentary Geology recently awarded MBARI Geologist Charles Paull the Francis P. Shepard medal for marine geology.
December 11, 2017 – Results of the Coordinated Canyon Experiment presented at the Fall 2017 meeting of the American Geophysical Union.
Feb 6, 2017 - During a study to learn how sediments flow through submarine canyons, a one-ton monitoring device on the seafloor was swept down Monterey Canyon and partially buried—twice in one year.
Monterey Canyon is one of the deepest submarine canyons on the west coast of the United States.