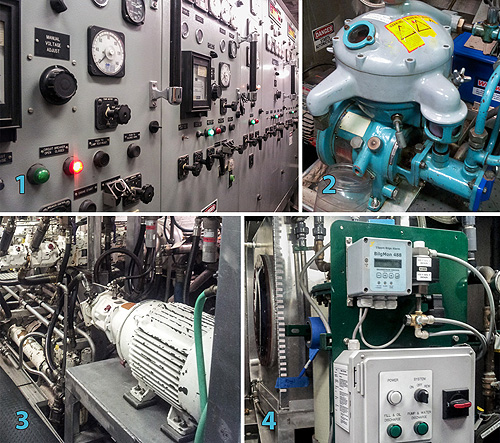 A Tour of the R/V Western Flyer

Mariah Salisbury writes: Unlike a terrestrial vehicle, which you can just fuel up and drive, it takes a lot more for the Western Flyer to get underway. Lance Wardle, who is sailing as chief engineer on this leg of the cruise, tells me it’s more like running a self-contained city than anything else.

He gave me a behind-the-scenes tour of the ship’s inner workings. As it turns out, the twin hulls of the ship are full of a lot more than just ballast water and empty space. Lance unlocks the door and we climb downstairs. At the bottom of the stairs, we are standing below the water line. It’s hot down here—the thermostat reads 100.2 degrees F (37.89 degrees Celsius). We wear ear protection, because the fans and engines would be deafening otherwise. Lance tells me that when the Flyer is working in Monterey Bay, it’s not so hot down below, because the water is about 15-20 degrees cooler in the bay, which makes a huge difference.

There is a surprising amount of space down here—much more than you would think just by looking at the ship from the outside. The space is quite full, but very well organized.

The self-contained city analogy is accurate. The ship makes all of its own water and power, and also processes all of its sewage. It has a reverse-osmosis system that makes about 3,000 liters (800 gallons) of water every day, and five generators that provide power to the ship. Usually only one or two of these generators need to run at a time, but if multiple generators are in use, the ship turns into a formidable power plant.

There are also systems to clean the power and the fuel. A power surge could be detrimental to much of the equipment, so even when the ship is moored in a port away from home, it only uses the clean power that it makes. The same is true with the fuel—having purified fuel prevents damage to the engines.

There is a tool room down here with a large work bench. There’s a room for all of the hydraulics, which run the winches and cranes. There is an oil/water separator, which makes the bilge water safe to discharge into the ocean. There are compressed air cylinders for filling dive tanks. There is a system for supplying the wet lab with both chilled and ambient temperatures of seawater. The list goes on, but perhaps the most important room is the parts inventory room. Lance tells me that the majority of the critical equipment has spare parts on board for making repairs. Nuts, bolts, hoses, paint—it’s all down here.

The ship also has a very sophisticated alarm management system. Along with letting you know if there’s something wrong in this little city, you can also check it to get information on all of the systems on board at the touch of a button. You can check the fuel and water levels, oil pressure in a machine, ballast levels, and anything else. It’s amazing.

To keep this floating city up and running requires that the whole system be checked over at least once every four hours. A crew of four take turns on watch, and there is also an electronics officer on call. On this leg of the cruise, the crew consists of Chief Engineer Lance Wardle, First Engineer Jason Jordan, Second Engineer Olin Jordan, Oiler Brian Imsland, and Electronics Officer Dan Chamberlain.

Lance says that one of the best things about working on this ship is the way that everyone will jump in to help when there’s a problem, and that everyone has strengths in different areas. He says that with such an incredible amount of pooled intellect, a lot can get done. What stands out to me is how much everyone cares about this ship. Lance tells me that this is not the case on most ships. Here, there is very little turnover, and everyone on board really considers this their home. 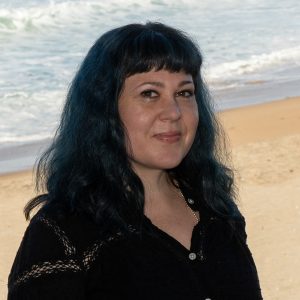