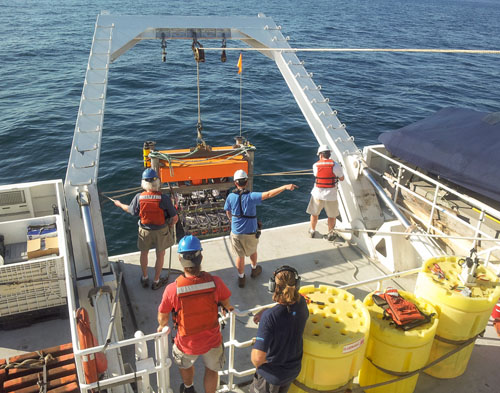 We steamed for a day to arrive at Isla Tortuga—a small, rugged, and beautiful little island near the middle of the Gulf. Fortunately, the weather has been great, and everyone aboard seems to be feeling fine and in good spirits.

A principal goal for the expedition is to increase our understanding of the influence of the oxygen minimum zone, or OMZ, on the diversity, distribution, and abundance of deep-sea biological communities. The OMZ is a layer of low-oxygen waters beneath the surface, with oxygen concentrations at depth dropping to less than 1% of those near the surface.

We have biologists and ecologists aboard the R/V Western Flyer studying fishes and invertebrates in general, and experts in various groups of animals, such as gastropod mollusks (snails), galatheid crabs (squat lobsters), and ophiuroid echinoderms (brittle stars). We’re anxious to observe and sample the seafloor community here and compare it to other areas in the Gulf with stronger or weaker OMZ conditions.

Our first task today was to deploy the benthic respiration system. Why respiration? Metabolic rates, typically estimated from rates of oxygen consumption (respiration), are a key metric of animal performance. In the OMZ, there may be too little oxygen for some animals to live there, or they may at least be forced to reduce their activities. Our respiration system has eight metabolic chambers to measure the oxygen consumption rates of animals, as well as their response to changes in oxygen and pH levels. The crew hoisted it over the side of the ship and released it, sinking it to the seafloor at a depth of 1,355 meters.

Next we used the ROV Doc Ricketts to collect small animals using its suction sampler–much like a vacuum cleaner nozzle, and released them into each of the metabolic chambers. It sounds pretty easy, but it was actually very difficult. We were chasing small shrimp, which are quite good at escaping. After a couple days, we’ll bring the system back to the surface, then download and analyze the data.

The next task was to start ROV transects to measure the abundance and distribution of fishes and invertebrates living on the seafloor. We started at a depth of about 1,350 meters and worked our way up the slope toward shallow waters (200 meters) through the core of the OMZ (400-1,000 meters).

Life on the ship revolves around the schedule for ROV dives and deploying or retrieving gear deployed over the side, punctuated by the regular meals and frequent swipes of snacks as I walk through the galley. I seem to be eating three times my normal meal intake, and I’m sure I’ll be loosening my belt soon.