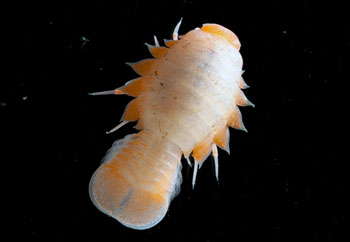 Unique Organisms in the Deep Sea

In addition to documenting the ecological zonation of the water column in the Gulf of California, we are venturing into parts of the ocean that have likely not been explored by humans before, in particular, not with the deep-sea observational tools we are using during this cruise. We have encountered unique organisms and their interactions, some of which have seldom been seen before.

For example, two days ago, we came across a squid that has only been seen once before by MBARI ROVs, also here in the Gulf in 2003. The species belongs to the genus Ancistrocheirus. We saw the specimen at a depth of 943 meters. It was hanging still in a cloud of ink, and when we approached it with the ROV it covered its eyes with its arms, probably trying to block the bright light from the ROV. The squid has hooks on the arms and tentacle clubs, and small photophores (light-producing organs) all over its body.

This morning we came across a relatively small specimen of the medusa Deepstaria enigmatica. This jellyfish was named after the research submersible Deepstar 4000, which collected the first specimens of this genus in 1966. During the MBARI expedition in the Gulf of California in 2012 we saw a large specimen of this genus with the ROV Doc Ricketts. This species is the home to another species, namely an isopod called Anuropus, which can be seen through the mantle of the jellyfish. These animals probably form a symbiotic relationship, perhaps eating food captured by the jellyfish.

We are looking forward to new findings in the coming days, though unfortunately, these are the last days for our group of scientists of the expedition. We are also looking forward to unexpected midwater observations made by scientists in future legs of the GOC expedition, who are passing through the pelagic environment on their way to the bottom or back to the surface.