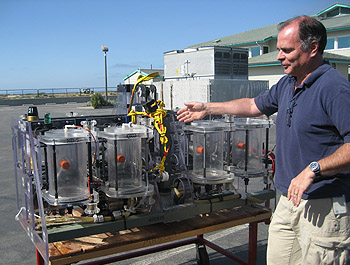 Mountain climbers know that changes in temperature and pressure can affect their energy level and their ability to breathe. Animals that live in the deep sea face similar challenges when scientists bring them to the surface for study. To address this problem, MBARI researchers have developed a new instrument that allows them to study the breathing of deep-sea animals without removing the animals from their environment.

By studying an animal’s respiration (how much oxygen it consumes), scientists can better understand how much energy (food) it needs to live. The rate at which an animal expends energy is called its “metabolic rate.” “If you want to understand how an organism is consuming and utilizing energy to live its life, its metabolic rate is a vital measurement to have,” said Bruce Robison, an MBARI marine biologist.

Robison studies animals like jellies, shrimp, and squid that live in the midwater—the vast watery space between the ocean surface and the seafloor. Learning about the respiration and metabolism of these animals will help Robison and other researchers expand their meager knowledge of midwater food webs.

Historically, the only way for scientists to measure a marine animal’s respiration was to remove it from the ocean and record measurements in a lab. For deep-sea animals, this process is particularly stressful because of the quick transition from the cold, high-pressure environment of the deep sea to the warmer, low-pressure conditions above the ocean’s surface. Scuba divers who ascend too quickly from depth may experience decompression sickness, or “the bends.” Robison and his coworkers were concerned that deep-sea animals might experience similar physiological stresses when brought to the surface, which could drastically affect their respiration rates.

Robison’s team wanted to avoid traumatizing their research subjects. “We thought, instead of bringing the animals up and putting them in the lab, why don’t we take the lab down to the animals and measure their respiration rate where they live?” Robison said.

In 2006, Kim Reisenbichler, Robison’s senior research technician, teamed up with MBARI engineers Craig Okuda, Mike Risi, and Bob Herlien to address this problem. The engineers had recently designed an instrument called a “benthic respirometer” to study animal metabolism on the seafloor. Over the next few years, the team altered their original design for use in the midwater.

The current version of the “midwater respirometer” consists of eight clear cylindrical chambers made of fused quartz. Each chamber holds 6.5 liters of water and contains an oxygen sensor. The midwater respirometer mounts onto the front of MBARI’s remotely operated vehicles (ROVs).

After sending an ROV hundreds or thousands of meters below the ocean surface, ROV pilots maneuver the ROV to catch one animal in each of the respirometer’s test chambers. Then they attach the instrument to a vertical mooring line and leave it in the depths for a day or two. During this time, the oxygen sensor in each chamber measures the decrease in oxygen due to the breathing of the animal inside.

“On the mooring, the animals see the same light levels they would normally see, they go through the same temperature cycles, and the pressure doesn’t change,” Reisenbichler said. This allows the researchers to measure the animals’ respiration in their natural environment. After 24 to 48 hours, the researchers use the ROV to bring the respirometer and the animals to the surface. According to Robison, “Most of these animals make it to the surface alive and healthy.” Later, in the lab, the researchers weigh each animal and in some cases make additional metabolic rate measurements.

So far, Robison’s group has measured respiration rates for a diversity of animals, including shrimp, worms, squid, and a variety of jellies, at depths ranging from 240 to 2,840 meters. The scientists have also collected animals and measured their respiration rates in the laboratory for comparison with data from the depths. They found that many animals consume oxygen at different rates in the lab and in the ocean, confirming their concerns about the accuracy of traditional research methods.

Robison and his colleagues are currently using the respirometer to study animals in Monterey Bay’s oxygen minimum zone—a layer of water centered at a depth of 700 meters where the oxygen concentration is very low. “Over the last 20 years we’ve seen that zone get bigger,” Robison said. “The part of the water column with low oxygen is expanding, and the oxygen concentration within it is getting lower.” These changes have profound effects on the distribution of marine organisms. Robison explained, “Animals are being dislocated. They’re being pushed out of their preferred depths because the oxygen is going down.”

Over the last decade, Robison’s team has observed deep-sea shrimps in the family Sergestidae (which typically live just above the oxygen minimum zone) moving closer to the sea surface. Currently the scientists are using the respirometer to measure the shrimps’ oxygen consumption at depths inside and outside the oxygen minimum zone. They want to see if low oxygen conditions are stressful for the shrimp, which could help explain why the animals have begun appearing closer to the surface.

In the future, the team plans to modify the respirometer so that they can change the pH (acidity) or oxygen concentration of the water during their experiments. They also hope to install a video camera to observe the animals’ activity in the respirometer, and relate this activity to changes in respiration.

Scientists still have much to learn about the lives of elusive deep-sea animals, which have adapted to live in a cold, dark environment where food and oxygen are often scarce. One way animals survive these challenging conditions is by reducing their levels of activity. The midwater respirometer will help scientists determine how these animals balance their food intake with their levels of activity and metabolic rates.

In recent decades, deep-sea animals have had to cope with additional stresses caused by human activities. Humanity’s carbon dioxide emissions, pollution, and nutrient run-off are increasing the ocean’s temperature and acidity, and decreasing its oxygen content. The midwater respirometer will provide a valuable tool for scientists to observe how these changing ocean conditions affect the ability of animals to breathe and survive. 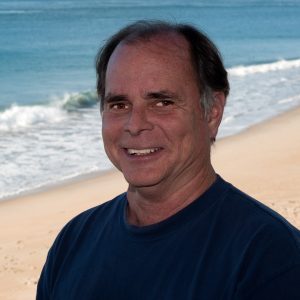