A squid graveyard and a deep-sea buffet 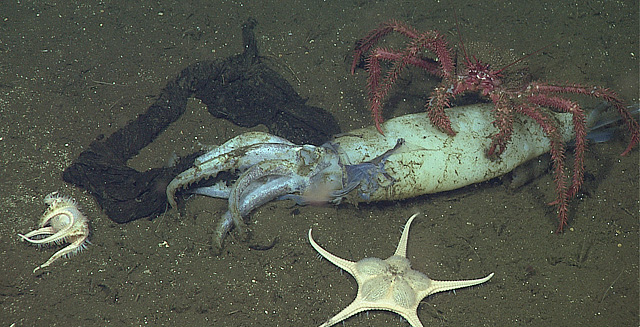 A recent paper describes an unusual discovery: dead squid littered across the deep sea bottom of the Gulf of California. It’s a squid graveyard that might be a boon for deep-sea animals.

The research was led by Henk-Jan Hoving, former postdoctoral fellow at MBARI and now a biologist at GEOMAR Helmholtz Centre for Ocean Research Kiel in Germany. Hoving and colleagues first spotted the squid remains during a 2012 remotely operated vehicle (ROV) dive in the Gulf.

“Normally we do research in the midwater, but this time we went to the seafloor” said Hoving. “And then we saw these squid carcasses, just one or two.”

With an egg sheet blocking their ability to feed, female deep-sea squid fast while their eggs develop. By the time the babies have hatched and swum away, a mother squid will have used up all of her stored energy and resources. The carcasses that the researchers found were likely these females, accompanied by the remnants of their reproductive efforts.

After the 2012 expedition, Hoving and colleagues asked fellow researchers for other similar sightings of squid and egg sheet remains. But it wasn’t until 2015 that he was able to return to the Gulf as a guest researcher with the MBARI Midwater Ecology Group and collect more observations. Over 11 ROV dives in the Gulf during 2012 and 2015, Hoving and the MBARI team discovered 64 dead squid or egg sheets scattered on the bottom. Most were found deeper than 1,000 meters (almost 3,300 feet) in the Cerralvo Trough, a deep basin near the southern end of the Gulf.

When squid carcasses and spent egg sheets fall to the seafloor, they provide nutrients and energy for animals that live thousands of meters below the surface. Many deep-sea animals eat marine snow—tiny particles of debris that sink from more productive waters near the surface. Larger animal remains that reach the seafloor are known as “foodfalls,” and can range in size from small fish to giant whales. Hoving noted, “Whale carcasses on the bottom might last in some form for decades. But we don’t know anything about midsize carrion such as squid carcasses. You have to get very lucky to see one—they likely get consumed within 24 hours.”

Because food is so scarce in deep water, the appearance of these squid and their egg sheets would seem to be a stroke of luck for animals on the seafloor. The scientists noted that the recently-deposited squid carcasses had already attracted ratfish, acorn worms, brittle stars, sea cucumbers, crustaceans, and sea stars.

Although the squid carcasses attracted plenty of scavengers, the egg sheets seemed relatively undisturbed. Other researchers have suggested the squid might incorporate ink into their egg sheets, making them less palatable to decomposers and bacteria; Hoving and the team speculated that they might take longer to disappear than the more easily-digested squid.

The remains could represent a scattered but significant food source for animals in the deep. The team’s research illustrates a link between animals in the midwater (the zone between the surface and the bottom) and the seafloor.

Sinking squid carcasses are part of what oceanographers and biologists call the “biological pump”—a process by which carbon is transported from the surface of the ocean to the depths. Conventionally, most carbon is assumed to drift slowly downward in the form of marine snow. But if large numbers of squid collect food in the midwater and then sink, this could speed up carbon transport in some areas or times of the year.

Research on deep-sea squids could soon be relevant to human impacts in the oceans. When fish are overharvested, cephalopods such as squids can start to take their place in ocean food webs. But while some fish often live for many years, squids live just a few years and have only a single reproductive cycle. “In this case the squid may die almost simultaneously, so there may exist pulses of dead squid falling to the seafloor,” said Hoving. “This could have a big impact on the biological carbon pump.”

Many squids live in dark ocean waters where humans rarely venture. “This research shows the importance of in situ observations. The squid and their egg sacks would never have been found by trawling,” said Hoving. “But if you start exploring less-known places, you will find these less-known things.”

MBARI video describing the discovery of the “squid graveyard”