First observations of an egg-brooding squid 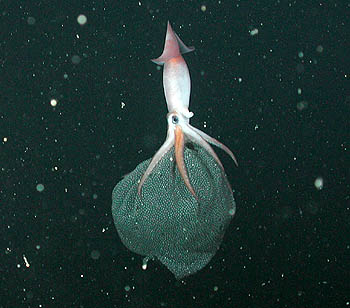 MBARI’s remotely operated vehicle Tiburon captured this photograph of a female Gonatus onyx carrying a large egg mass, which is suspended from hooks on the squid’s arms. In this photograph, the squid is apparently using its arms to pump fresh water through the egg mass, causing it to inflate. Image: (c) 2002 MBARI

The world’s oceans harbor a wide variety of squid, from 10-centimeter-long market squid to the elusive giant squid, which may grow to over 20 meters in length. Based on decades of observations, marine biologists assumed that all of these species of squids laid their eggs in clusters on the sea floor, where the eggs developed and hatched without any help from their parents. However a recent paper by researchers at the University of Rhode Island and at MBARI shows that females of at least one species of squid brood their eggs, carrying the eggs between their arms until the young hatch and swim away.

Brad Seibel, now at the University of Rhode Island but formerly a postdoctoral fellow at MBARI, coauthored this paper with MBARI researchers Bruce Robison and Steve Haddock. The five squid they observed brooding eggs were all Gonatus onyx, which are common in deep waters throughout the world. However, like many deep-sea animals, little is known about Gonatus’ reproductive habits because scientists have only been able to study dead animals that were brought up from the depths in nets. 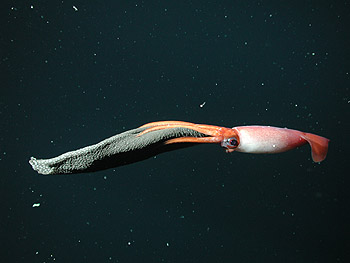 Seibel and his coauthors used MBARI’s remotely operated vehicle (ROV) Tiburon to observe and photograph live squid in their native habitat, at depths of about 1,500 to 2,500 meters (about 5,000-7,000 feet). Seibel found that the female squid have small hooks on their arms, which help them hold onto large clusters of up to 3,000 eggs. As they swim, the female squid slowly pump water through the tubular egg clusters, presumably to keep the eggs well supplied with fresh water and oxygen.

Although the female brooding squid are fairly agile, they can’t swim very fast while carrying the bulky egg clusters. Thus, Seibel suspects that they would be easy prey for deep diving animals such as whales and elephant seals. Apparently, however, the benefits of maternal care to the young squid outweigh the risks of being eaten. Seibel and his coauthors also suggest that that other species of squids may brood their young at depth, and that scientists simply have not yet been in the right place at the right time to catch them in the act.