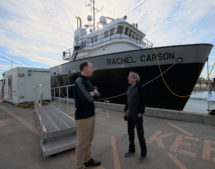 The diesel engines on MBARI’s research vessel Rachel Carson were recently replaced with new Caterpillar engines that are expected to reduce emissions by 8.4 tons a year. This work was completed under a grant from California’s

MBARI’s Director of Marine Operations, Mike Kelly, first learned about the Carl Moyer Program in an advertisement in a maritime newsletter. The program began in 1998 with a goal to reduce air pollution from vehicles and equipment by providing funds for businesses to purchase cleaner-than-required engines or other emission-reducing technologies. Grants are administered by local air districts, and projects can range from agriculture equipment to off-road equipment to marine vessels. 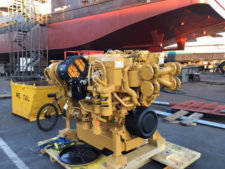 One of the new Caterpillar engines ready to be installed on the Rachel Carson. Photo: Mark Aiello © 2018 MBARI

The program’s application process requires documentation of engine usage (both hours run and fuel consumption) and an estimate of cost to replace current equipment. The local air resources district (in this case, MBARD) then conducts a cost-benefit analysis based on the amount of projected emission reductions and the cost of the replacement engines. Since research vessels are currently not required to reduce emissions, the Carl Moyer Program will reimburse up to 85 percent of the Rachel Carson’s engine costs as a way to incentivize voluntary equipment upgrades. 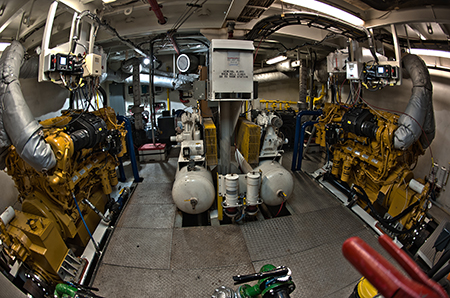 Both engines fit nicely in the engine room on the R/V Rachel Carson thanks to careful planning by Bay Ship and Yacht and MBARI’s marine operations team. Photo Todd Walsh © 2018 MBARI

The ship’s engines were replaced at Bay Ship and Yacht, a shipyard based in Alameda, California. Shipyard staff worked with MBARI’s Marine Operations staff on the designs and installation of the new engines, including integrating the engines into the existing systems. This meant retrofitting many pipes and hoses needed to connect the engines to the ship.The old engines were destroyed, as part of the grant’s requirements, by cutting a large hole in each engine block. Photos of the destroyed engines were sent to MBARD for confirmation. 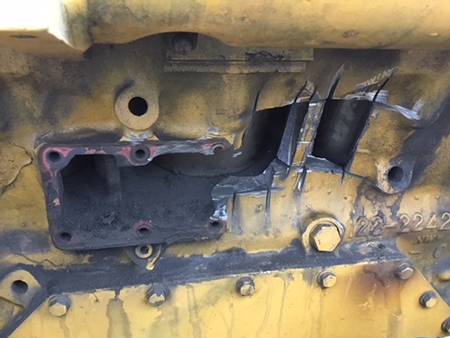 Evidence of the destroyed starboard original engine. As part of the grant requirements, MBARI had to destroy the original engines by cutting a hole in the engine block. Photo: Mike Kelly © 2018 MBARI

The Rachel Carson crew, accompanied by representatives from Bay Ship and Yacht and Petersen Power, MBARI’s Caterpillar representative, conducted the first sea trial of the new engines on December 11, 2017,   transiting from the shipyard to the Golden Gate Bridge and back. A week later, the Rachel Carson was back in Moss Landing Harbor.

Representatives from MBARD came to inspect the new engines and to witness a cold start before signing off on the project. The process of putting everything back on board the Rachel Carson began with loading a refurbished workshop, winch, and the remotely operated vehicle (ROV) Ventana. The Rachel Carson, with her new engines and the recently overhauled ROV, is scheduled to start science expeditions in mid-January. 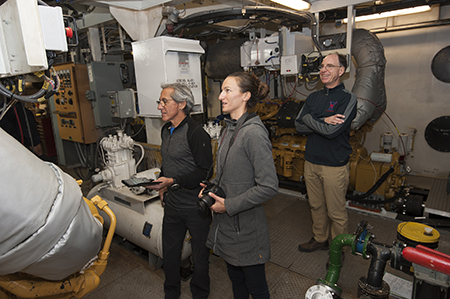 Jan 11, 2016 - In late 2015, MBARI hired Michael Kelly as Director of Marine Operations and Basilio Martinez as Chief Financial Officer. These individuals will replace senior MBARI staff who are retiring.
Jan 17, 2012 – For over 20 years, the Point Lobos has been MBARI's workhorse research vessel, ferrying the remotely operated vehicle Ventana out of Moss Landing Harbor several times a week.
On December 1, 2011, MBARI's workhorse research vessel, the Point Lobos, carried out its last scheduled ROV dive. Here are some photos from that historic day.