While the MBARI research vessel Rachel Carson is in the shipyard for an important engine upgrade, the marine operations team that manages the remotely operated vehicle Ventana is taking full advantage of the nearly three months the vehicle is off the ship.

The first order of business was removing the large foam block from the vehicle. The block is designed to add just enough buoyancy to ensure that if anything goes wrong, the vehicle will float to the surface. Also, when the ROV operates with slight positive buoyancy, there is minimal disturbance to fine sediments on the seafloor from the ROV thrusters.  This makes benthic research and observations much easier. 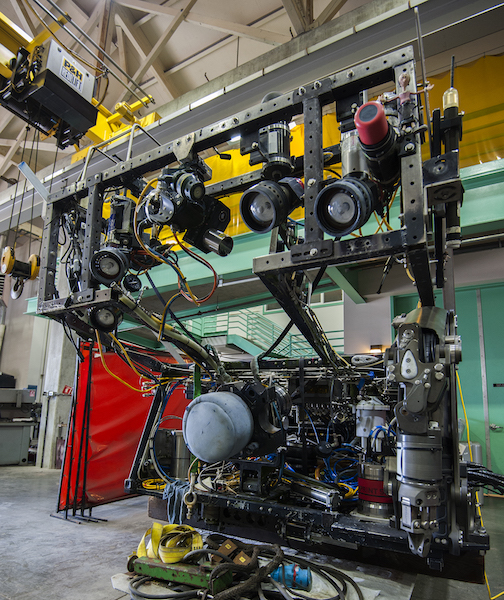 The front of ROV Ventana without the foamblock. Photo: Todd Walsh © 2017 MBARI

When the foam block came off the vehicle, the team found a few “surprises,” said Craig Dawe technical support manager. The main surprise was damage to the main lift plate—the mechanism necessary for lifting the ROV on and off the R/V Rachel Carson. Members of the ROV team noticed small cracks in the stainless plate, which can lead to corrosion from water intrusion. There was also rust and damage to the structure surrounding the lift plate. Repairs to the lift plate were added to the two primary maintenance goals: 1) re-trim the vehicle and 2) replace the original hydraulic system. These repairs are no small feats on their own.

Ventana’s center of buoyancy has been slightly “off” for most of its service life. This is due to an error made in the specifications on the last foamblock. The vehicle was functional and has successfully completed thousands of dives, but there is a distinctive “bucking,” as Dawe puts it, “especially when you are focusing on a small animal in the midwater.” This bucking is caused by a small misalignment of the center of thrust and the center of buoyancy, a mere six inches. The thrusters are being moved forward six inches, which will align the center of thrust and center of buoyancy and fix the bucking tendency and make “flying” much easier for the pilots, and produce higher quality video for MBARI scientists. 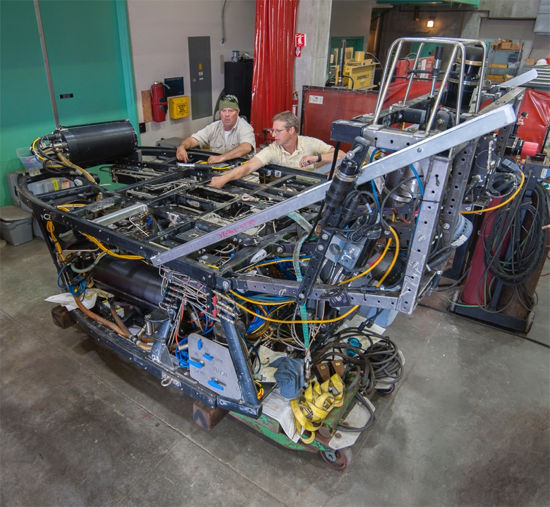 The second task on the to-do list is to replace the original hydraulic system. There have been repairs and upgrades over the years, but the main system is the same one put in 30 years ago! The new system will include a 2,300-volt, three-phase, electronic motor with new temperature and water-detection sensors. This task also involves re-plumbing the entire vehicle.

Finally, Ventana is getting a new 1,800-meter tether that will allow for more fiber-optic data channels and another roughly 300 meters of depth compared to the previous tether. The R/V Rachel Carson should be back at the MBARI dock by January 2018, when Ventana will be re-integrated with the ship and control room and will be ready to continue exploring the depths.

Mar 10, 2017 - MBARI’s remotely operated vehicle (ROV) Ventana completed its 4,000th dive in February 2017. With over 16,000 hours underwater, Ventana is by far the most experienced scientific ROV in the world.
The hydraulically powered ROV Ventana is launched by crane from the deck of the R/V Rachel Carson over the side of the ship. It can reach depths of 1,850 meters (more than a mile).