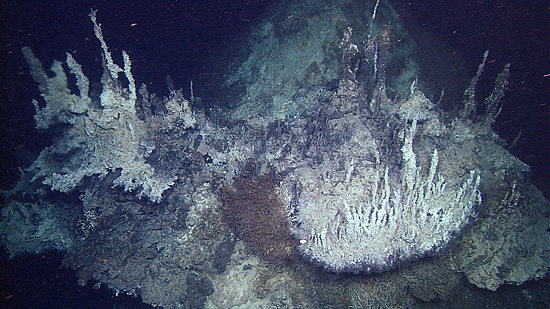 These delicate carbonate spires formed when scalding hot water emerged from sediments in the Pescadero Basin and came in contact with near-freezing seawater. Dense colonies of tubeworms grow on the sides of the spires. This group of spires is about six meters (20 feet) wide. Image: © 2015 MBARI

In spring 2015, MBARI researchers discovered a large, previously unknown field of hydrothermal vents in the Gulf of California, about 150 kilometers (100 miles) east of La Paz, Mexico. Lying more than 3,800 meters (12,500 feet) below the surface, the Pescadero Basin vents are the deepest high-temperature hydrothermal vents ever observed in or around the Pacific Ocean. They are also the only vents in the Pacific known to emit superheated fluids rich in both carbonate minerals and hydrocarbons. The vents have been colonized by dense communities of tubeworms and other animals unlike any other known vent communities in the in the eastern Pacific.

Like another vent field in the Gulf that MBARI discovered in 2012, the Pescadero Basin vents were initially identified in high-resolution sonar data collected by an autonomous underwater vehicle (AUV). MBARI’s yellow, torpedo-shaped seafloor-mapping AUV spent two days flying about 50 meters above the bottom of the Basin, using sound beams to map the depth and shape of the seafloor. 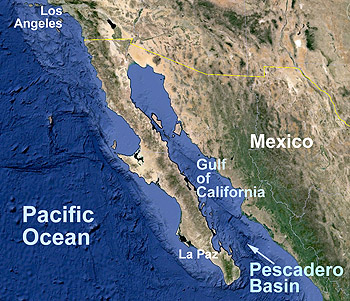 The Pescadero Basin is located in the Gulf of California, about 150 kilometers (100 miles) east of La Paz, Mexico. Base map: Google Maps

The AUV team, led by MBARI engineer David Caress, pored over the detailed bathymetric map they created from the AUV data and saw a number of mounds and spires rising up from the seafloor. Data from the AUV also showed slightly warmer water over some of the spires, which implied that they might be active hydrothermal-vent chimneys. A team of geologists led by David Clague then used a tethered underwater robot, the remotely operated vehicle (ROV) Doc Ricketts, to dive down to the seafloor, fly around the vents, and collect video and samples of rocks and hot water spewing from the chimneys.

Reflecting on the discovery, Clague commented, “Before the AUV survey of Pescadero Basin, all we knew was that this area was really deep and filled with sediment. I was hoping to find a few outcrops of lava on the seafloor. But we got lucky. The vent field was right on the edge of our survey area, along a fault at the western edge of the basin.” 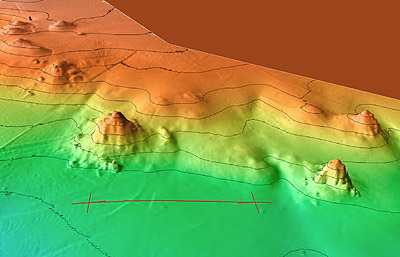 This 3D map of the seafloor was generated using sonar data from MBARI’s seafloor-mapping AUV. It shows several hydrothermal chimneys rising up to 12 meters (40 feet) above the floor of the Pescadero Basin. Image: © 2015 MBARI

The AUV and ROV dives showed that the new field extends for at least 400 meters (one quarter mile) along this fault. Within this area the researchers found at least three active hydrothermal chimneys up to 12 meters (40 feet) tall, as well as dozens of low mounds that are most likely collapsed chimneys.

After his ROV dive, Clague noted, “This site was not at all what I was expecting.” For one thing, the fragments of chimneys that the ROV brought back to the surface were quite different from those collected at other vents in the area. The Pescadero chimneys consisted entirely of light-colored carbonate minerals instead of the dark sulfide minerals that are abundant in hydrothermal chimneys elsewhere in the Gulf.

The Pescadero Basin is only the second place in the world where carbonate chimneys (instead of ones made primarily of sulfides) have been found in the deep sea. The other known location is the “Lost City” vent field in the middle of the Atlantic Ocean, at a spot on the Mid-Atlantic Ridge.

The geologists also noticed that their rock samples smelled like diesel. They hypothesize that hot hydrothermal fluids migrating upward through the thick sediments of the Pescadero Basin “cook” organic matter in the sediment, converting it into petroleum-like hydrocarbons—a process that has been observed at several other vents in the Pacific. Hydrocarbons may provide nutrition for the unusual microbes that thrive at these vents. 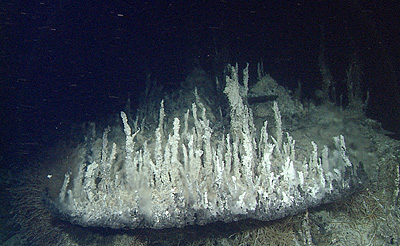 After Clague’s initial ROV dive, MBARI biologist Robert Vrijenhoek made three follow-up dives in the Pescadero Basin. His goal was to determine how and why animal communities at the Pescadero vents differed from those at other vent fields in the Gulf.

Clague’s and Vrijenhoek’s dives revealed at least three different types of hydrothermal vents in the southern Gulf of California—black smokers, carbonate chimneys, and hydrothermal seeps. Each environment supports its own unique animal community.

Black smokers form in active volcanic areas. One such area is on the Alarcón Rise, about 160 kilometers (100 miles) south of the Pescadero Basin, where MBARI researchers discovered several hydrothermal fields in 2012. On the Alarcón Rise, massive, dark-colored sulfide chimneys rise more than 37 meters (120 feet) above the lava-covered seafloor. These chimneys gush extremely hot fluids (over 350 degrees Celsius, 660 degrees Fahrenheit) rich in heavy metals and sulfides. When the superheated fluids come in contact with near-freezing seawater, these minerals precipitate, forming dark, smoke-like plumes of particles. The “black smoker” chimneys are often colonized by giant tubeworms in the genus Riftia, which grow over two meters (six feet) long, as well as limpets, crabs, squat lobsters, and Alvinella palmworms. 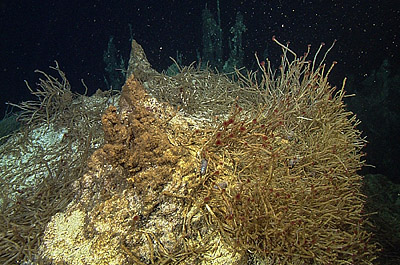 Many of the hydrothermal chimneys in the Pescadero Basin were covered with dense colonies of Oasisia tubeworms, which are rare elsewhere in the Gulf of California. Image: © 2015 MBARI

In contrast, the carbonate chimneys in the Pescadero Basin emerge from a flat, muddy seafloor, and are smaller and more delicate than black smokers. They emit fluids that are slightly cooler (250-290 degrees Celsius) and do not form dark, smoke-like plumes. The Pescadero Basin fluids are, however, rich in oil-like hydrocarbons that form dark, oily crusts on the light colored carbonate chimneys. They also support a very different group of animals, including dense colonies of tubeworms in the genus Oasisia.

In the third type of vent environment, “hydrothermal seeps,” much cooler (less than 30–60 degrees Celsius) water trickles out of lava flows interleaved with seafloor mud. These seeps support an entirely different community of animals, including anemones, tubeworms in the genera Lamellibrachia and Escarpia, and broad, white mats of bacteria. In contrast to the Pescadero and Alarcón vents, each of which hosted a single species of deep-sea clams, the seeps support at least four different types of clams.

One thing that all of these communities have in common is that the dominant tubeworms and clams host specialized intracellular bacteria (symbionts) that allow these animals to exploit potentially toxic chemicals in the vent fluids as sources of nutrition. Vrijenhoek and his collaborators are trying to figure out if the different vent communities in the Gulf are controlled by differences in water depth, geochemistry, symbiotic bacteria, or perhaps other unanticipated factors. 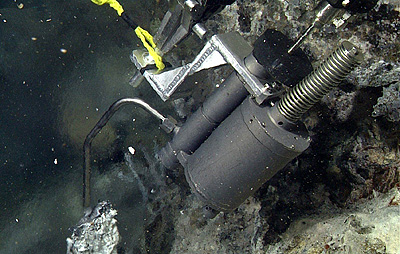 The discovery of the Pescadero Basin hydrothermal field is just the latest example of how MBARI’s extensive use of underwater robotics has accelerated the pace of scientific discovery in the deep sea. As Vrijenhoek noted, “In the 1990s, following the discovery of plumes of warm water over the Mid-Atlantic Ridge, researchers from four countries searched for seven years to find what eventually became known as the ‘Rainbow vent field.’ They were limited by inaccurate and imprecise bathymetric maps. This spring it took us only two days to do the same thing in the Pescadero Basin, using MBARI’s high-precision seafloor-mapping AUV.”

Sept 8, 2020 – MBARI scientists use sound to track day-to-day changes in the eruption of an underwater volcano.
April 28, 2020 – MBARI's underwater mapping efforts off the Pacific Northwest have revealed almost 600 hydrothermal chimneys rising from the deep seafloor.
April 25, 2019 – MBARI researchers recently created a new map of Loihi, an undersea volcano that will be the next Hawaiian Island.

Volcanic events and deposits in the ocean are largely concealed from view and more difficult to sample than volcanoes on land. The submarine volcanism group studies processes that form and modify volcanoes in the sea.