Mapping the next Hawaiian island 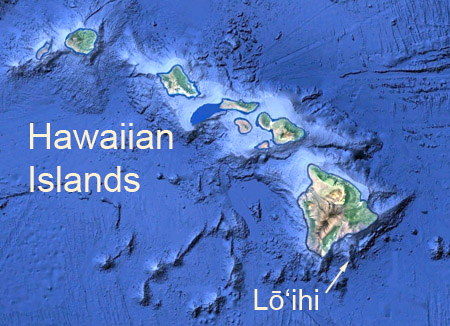 Loihi is an underwater volcano southeast of the Hawaiian Islands. It could reach the surface in 100,000 years. Base map: Google Earth

One hundred thousand years from now, Hawaii’s youngest volcanic island will break the surface of the North Pacific Ocean. This baby volcano—known as Loihi—is currently growing 1,000 meters (about 3,300 feet) below the ocean surface at the southeastern end of the Hawaiian Islands, and will be the next addition to the 8,000-kilometer-long (5,000-mile-long) volcanic island chain.

Drawing on bathymetric data from three different surveys conducted over the last 25 years, MBARI researchers recently created a new map of Loihi and applied these new findings to better understand the 2018 eruption at Kilauea Volcano, which destroyed over 700 homes.

“The cool thing is that the new survey data plays right into Kilauea’s history, which has big impacts on the people who live there,” said Dave Clague, an MBARI scientist who has studied undersea volcanoes for almost 50 years.

Because data from the three surveys were very “messy,” researchers from various institutes had been unable to make maps from these data sets. But MBARI researchers figured out how to put the data back together using MB-System, a seafloor mapping software package that allows researchers to adjust for navigation errors and remove redundancies in the data. 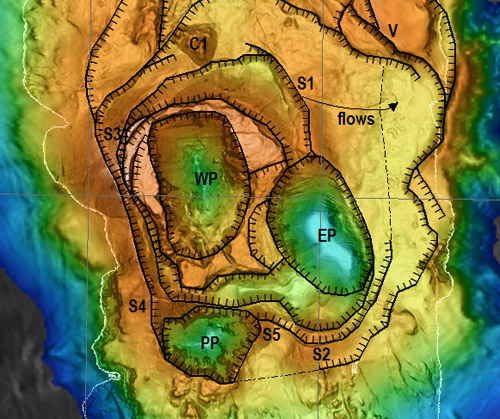 “It was fun to see the old and never particularly well-used data set get resurrected,” said MBARI Principal Engineer Dave Caress who co-created the MB-System software. Tracking the exact whereabouts of mapping vehicles cruising over the deep seafloor remains a big challenge. “Your navigation may be very good for a short period of time, but it’s going to be drifting,” explained Caress.

Data from the oldest survey were collected in 1997 without the use of GPS by a deep-tow sonar survey system trailing behind a ship. The other two surveys were carried out by Woods Hole Oceanographic Institution’s underwater robot, Sentry, in 2013 and 2014. The Sentry surveys had very high resolution, but suffered from navigational issues common to all autonomous underwater vehicles (AUVs).

An AUV loses contact with GPS satellites as soon as it dives, making the navigation data challenging to unravel. “The AUV’s navigation tracks looked like a pile of spaghetti, and data from various places on Loihi’s summit overlapped where they shouldn’t have,” said Research Specialist Jenny Paduan, who analyzed and repaired the data sets.

Using newly developed tools in MB-System, Paduan matched features on the seafloor to untangle and piece the maps back together. “With a lot of work, it came together like a large jigsaw puzzle,” she said.

The resulting high-resolution map of Loihi’s summit reveals details of several summit calderas (large oval depressions). These calderas formed as Loihi erupted, emptying lava chambers one to two kilometers below the seafloor and causing the seafloor to collapse. Where multiple calderas overlap, geologists can figure out the eruption history of the volcano.

Similar calderas formed on Kilauea during the devastating 2018 eruption. Mapping these collapse events will help researchers better understand the life stages of Loihi, Kilauea, and other active Hawaiian volcanoes. This could help geologists prepare for future eruptions.

“This research makes a clear connection between the collapse events, withdrawal of magma, and having the magma erupt someplace else,” said Clague. “There’s definitely an underground pipeline there.”

April 25, 2019 – MBARI researchers recently created a new map of Loihi, an undersea volcano that will be the next Hawaiian Island.
Dec 15, 2016 - Axial Seamount, a large underwater volcano off of the Oregon coast, is one of the most active volcanoes in the world, having last erupted in 2015. At the Fall 2016 meeting of the American Geophysical Union, MBARI researchers unveiled a new seafloor map that reveals previously undocumented lava flows from the 2015 eruption.
Jun 2, 2015 – In spring 2015, MBARI researchers discovered a large, previously unknown field of hydrothermal vents in the Gulf of California, about 150 kilometers (100 miles) east of La Paz, Mexico.
June 25, 2012 – Axial seamount, 480 km (300 miles) off the coast of northern Oregon, is one of the best studied underwater volcanoes in the world. Now MBARI researchers have created the world's most detailed map of an underwater lava flow, showing lava that erupted from Axial Seamount during April 2011. They describe this mapping effort and related geological discoveries in a recent paper in Nature Geoscience.