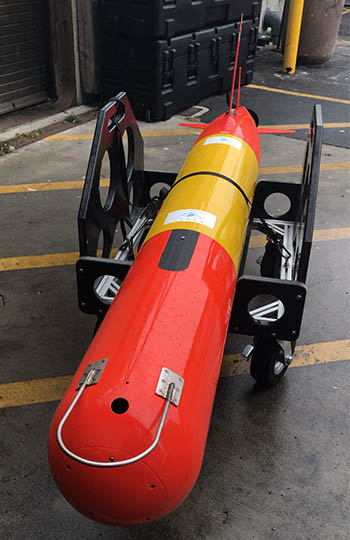 Long-range autonomous underwater vehicle (LRAUV) Galene is being used to test new software for detecting problems that could cause a vehicle failure. Photo by Madison Heard © 2019 MBARI.

One of our newest long-range autonomous underwater vehicles (LRAUVs) Galene has graduated from in-house testing and is now stretching its legs out in Monterey Bay.

On Tuesday, June 18, LRAUV Galene took the plunge and began its first sea trial. In line with the naming convention used for all our LRAUVs, Galene is named for a sea nymph in Greek mythology and joins the fleet through the teamwork of MBARI engineers, led by Project Manager Brett Hobson and  Principal Engineer Mathieu Kemp.

Building of the vehicle began in September of 2018. The vehicle has undergone trials in MBARI’s test tank to prepare for its inaugural launch about three kilometers (1.8 miles) offshore, where the team was met with a smooth ocean and pristine deployment conditions. Once in the water, Galene began running a few internal trials to assess whether the AUV is functioning as it should. Then Galene began to run Kemp’s software created to solve equipment malfunctions in AUVs in real-time.

The MBARI LRAUV fleet has evolved over the decade since initial development to help scientists tackle such questions as how eddies impact life in the open ocean and which animals are involved in the daily migration from the depths to the ocean surface. While the vehicles have been used successfully to collect data at sea,  they have commonly experienced internal equipment malfunctions that have either terminated their missions or intervened in meeting their mission goals. The goal of this newest LRAUV project is to create solutions to common problems facing autonomous underwater vehicles while out on missions, such as maintaining stability and orientation while flying through the water. Ultimately the goal is for the vehicle to communicate the internal status of the AUV to the researchers and engineers on shore—just as a car’s “check engine” or “low tire pressure” lights notify a driver of an internal error that requires action soon. 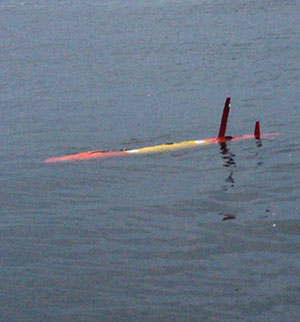 This initial deployment forced one of a few common fail-points within AUVs to repeatedly malfunction. This test gathered data for researchers to analyze back on shore and will be used to prepare the vehicle to predict when this type of failure is going to happen and make internal adjustments to avoid this failure on future missions. With this technology, MBARI LRAUVs can stay at sea for longer periods while adjusting to internal factors that could otherwise end their mission.

LRAUV Galene is just one of six new AUVs that will provide enhanced access to the sea   to help us further understand our changing ocean.